The railway, superseding the dangerous Oregon trail, allows the emergence of civilization into the wilderness of the Western American territories that are not yet upgraded into states.

The village of Green River in Dakota Territory is served by the Pacific section in July 1868 before the famous transcontinental junction of 10 May 1869. Green River will be part of Wyoming in the later division of states.

Green River was incorporated as a city in 1868 and became a rallying point for geological and geographical expeditions starting with Powell in 1869.

Thomas Moran arrives by train to Green River in 1871 to join the Hayden expedition. The admirer of Turner is dazzled by the variety of colors: the reflection in water adds green and lavender to the yellow and orange of the cliffs. He immediately realizes a first watercolor. He does not seek realism but idealization and the result is sumptuous. For four decades, Moran wanders through Wyoming, Montana and Arizona in search of extreme landscapes. His paintings with subtle pink, yellow, orange, lavender and vermilion hues of the cliffs in the beautiful morning light make him famous.

Throughout this period he also idealizes with many variations his Castle Rock, bringing an additional majesty to that peak over Green River by reducing its width.

From 1878 in New Mexico, the Lincoln County War is a conflict without mercy between gangs for the control of cattle and horses. The very young Billy the Kid, a robber from the age of 16, a murderer for any reason and a federal fugitive, went to be one of these gang leaders. He used several names in his short life, all of them in relation with his family.

In November 1880, Pat Garrett is elected sheriff of the county. Although his term was to begin on January 1, he immediately obtains a commission to pursue Billy the Kid within the limits of the county. On December 13 a $ 500 bounty is posted by the governor for the capture of the outlaw.

On December 23 Billy the Kid and his whole gang are captured by Garrett and his men. Sentenced to hang, Billy escapes from custody on April 28. While in jail his notoriety had raised through the local gazettes.

Garrett is not yet awarded with the bounty. On July 14, in search for the fugitive, he discusses the issue with a ranch owner. Around midnight a man enters the room in the dark. Garrett will state that he had recognized the voice of Billy the Kid. He fires twice and kills the man.

The corpse was certified by the local justice of the peace but the reward was not paid to Garrett. He managed to respond to the rumors that he had been unfair. His biographical account of Billy the Kid co-authored by an itinerant journalist was considered as factual in period. It contributed to transform that ferocious but enigmatic desperado into the major folk hero of the Wild West.

A doubt still subsists on who was killed by Garrett on July 14. On July 28 a local newspaper reported that the outlaw had allowed his beard to grow and had stained his skin brown to look like a Mexican. Dead or alive, the mythic gang leader never resumed his criminal industry.

The Early West, our upcoming auction on 27 Aug, features one of the most iconic weapons of the American Wild West — the gun that killed 19th century outlaw #BillytheKid.

From his studio in New Rochelle in the suburbs of New York, Frederic Remington illustrates for the magazines the joys and torments of the frontiersmen. He wants to revive by his realism the atmosphere of the Wild West and is influenced by the decomposition of the gallop masterfully demonstrated by the photographs of Muybridge against all preconceived ideas.

When Remington becomes a sculptor, he pushes to its paroxysm the study of the imbalance in rapid movements. In 1895 his first masterpiece in that technique, The Broncho Buster, shows a tall prancing horse on his hind legs with no other support, seeking to dismantle his rider. A bronze 58 cm high edited in 1906 was sold for $ 2.6M by Christie's on November 29, 2007.

Even bolder : in 1896, the sculptor attempted a group of two in full gallop entitled The Wounded Bunkie, only connected to the base by two hoofs, one per horse in compliance with the findings of Muybridge. A bronze 51 cm high edited in the first year with a red brown patina was sold for $ 5.6M from a lower estimate of $ 3M by Sotheby's on May 22, 2008, lot 171

Quite as dynamic with its rider on a pulled up horse, the 57 cm high Outlaw, lot 167 in the same sale as the Wounded Bunkie, was sold for $ 3.4M from a lower estimate of 2 M$. Edited in 1906, therefore still in the artist's lifetime, this bronze has a dark brown patina.
1896

After a boyhood in Missouri, Charles M. Russell was definitely attracted by Rocky Mountains and pioneer life. He made his first visit to Montana in 1880 at sixteen years old. He returned two years later to spend there the rest of his life.

Charley was a cowboy before being an artist. Unlike Remington, he was not working as an illustrator and did not want to compromise with eastern American lifestyle. His wife Nancy seconded him to disclose his art.

This oil on canvas 75 x 120 cm dated 1899 stages a hold up. It features bandits pointing their guns towards travelers as they just leaved their diligence. They have their hands up, which is a fairly classical and even recommended attitude in such a situation.

Frederic Remington is the illustrator of the Wild West for the use of the magazines. He maintains this know-how through short trips to the West. In 1900 he returns disappointed : civilization had distorted the life in the West which provided his business. He decides never to go West again and will keep his word. He still has his imagination and his artistic production is not slowed down.

Remington provides the images expected by the readers. He has no ethnological curiosity. The Indian is an enemy warrior with whom communication is impossible.

The Buffalo Signal, oil on canvas 102 x 69 cm painted in 1900, is a rare example in which Remington expresses his nostalgia. To make a signal, an Indian scout rears his horse and brandishes a buffalo hide high over his head. A buffalo skull is placed in front of him on the sand. The arid desert and the cloudless sky complete this typical atmosphere that anticipates the western movies.

Two years later Remington uses this image as the frontispiece in a book, with the title If Skulls Could Speak, a direct allusion to the bygone cultures of the American West, symbolized by the extinction of the bison herds.

In 1871, the Hayden survey explores and describes Yellowstone. Nature had created without human help some fabulous romantic landscapes. The scientists are accompanied by two young artists, the photographer WH Jackson and the painter Thomas Moran.

Photos are black and white at that time, so it was left to the paintings of Moran to display to the Americans the extraordinary colors of the Rocky Mountains. Even the Congress is charmed by these images. In 1872 the first national park is established in Yellowstone.

Moran was seduced by this theme that occupied him for his entire career. Inspired by Turner's art, he expressed the deep sensitivity of the landscape in a sharp line that respected the geological realism.

Nothing stops Frederic Remington. In 1902 he conceives a group of four linked through five legs, departing from Muybridge. The founder succeeds in convincing him of the impossibility of the realization and a compromise with six bearing hoofs is accepted. Titled Coming through the Rye, it is once again a scene expressing a great fastness. The four galloping horses are ridden by cowboys in full euphoria who exhibit their pistols at the end of their arms stretched upwards.

Some orders are received in 1903 but the realization is a feat. This complex piece 78 cm high is too cumbersome and the price tag at 2,000 dollars is too expensive. Very few copies will be made.

Considering this commercial failure Remington destroyed his models in wax and plaster in 1908. In the same year, disgusted by the new trend of fantasy illustrations, he prepared a bonfire in his yard and destroyed hundreds of his original paintings. This artist out of standards in every sense of that wording dies in 1909 at the age of 48 from complications related to his extreme obesity.

Announcing Frederick Remington's Coming Through the Rye selling this May in our American Art sale https://t.co/ZsojWhvXUb pic.twitter.com/LXdvOHZ55A

Frederic Remington was a man of the East, at a time of an intense curiosity about the Wild West. He became an artist and his works were published in magazines such as The Century Magazine, Harper's Weekly and Collier's Weekly. He was a contemporary of Theodore Roosevelt and illustrated a book by him in 1887.

He at first made ​​frequent trips to the West to soak up the atmosphere. The men of the cavalry were gallant heroes against the fierce Indians, and they were also clients who could ensure his glory.

Caught in the social life of the East, he became obese and almost impotent. He began at that point his career as a sculptor. He was the best interpreter of the riders on their fiery horses, with magnificent bronzes and also realistic figures of the gallop positions as proved to artists by Muybridge's experiments.

From 1901 his work for Collier's became steady. When Remington died in 1909, the magazine still had sixteen of his paintings ready to be published.

The cowboy Charles M. Russell gradually understood the way of thinking of the Natives. He was resolutely hostile to the automobile considered as a danger to their fragile civilizations. His attitude concerning the railway is similar though less virulent.

This oil on canvas 60 x 90 cm painted in 1918 stages a team of Indians on horseback coming at sunset for a negotiation.

​The image is shared on Wikiart : 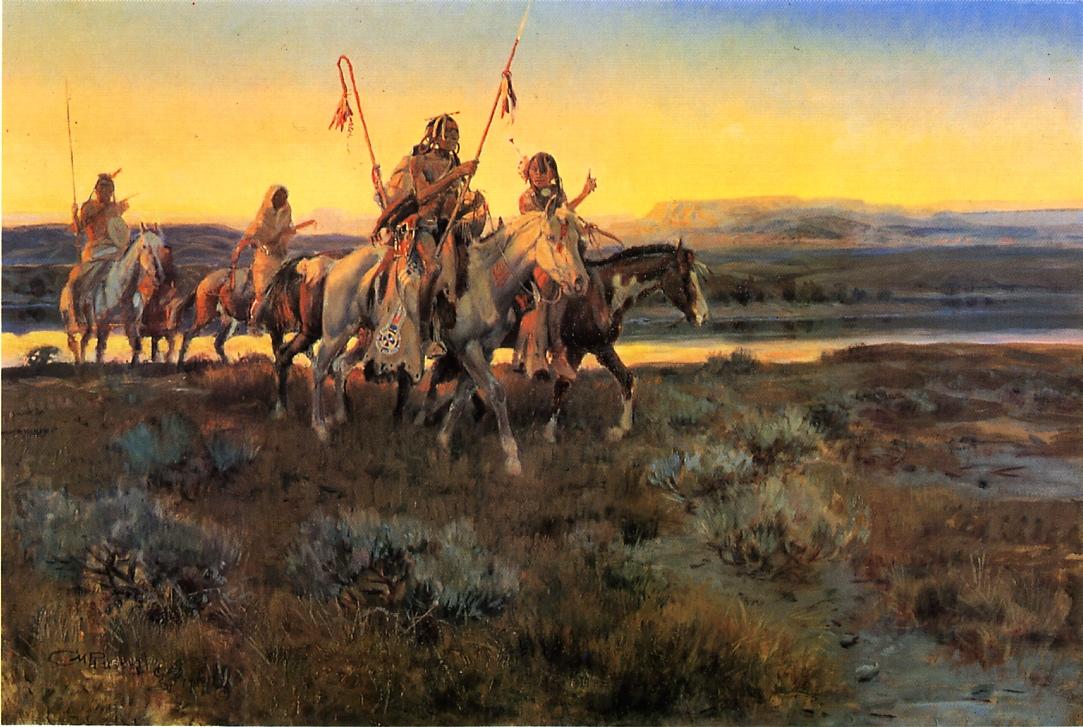