The Dutch artist Lawrence Alma-Tadema moved to England in 1870. Taking advantage of the pre-Raphaelite fashion for ancient themes, he spent the rest of his career there. His business was flourishing and meticulously managed, and he was covered with honors in Victorian and Edwardian England.

Alma-Tadema paints the antique passions, with a sharp drawing and bright colors that evoke the Orient. He depicts the most beautiful women and their lovers, languid to the limits of debauchery. He surrounds them with luxurious objects for which he accumulates a strong documentation through his trips to Greco-Roman sites, his visits to museums and his abundant collection of photographs.

In 1883 Alma-Tadema is inspired by Shakespeare's play to paint the First meeting of Antony and Cleopatra for a private commission. The queen displays her beauty as in a window, in a barge covered with a canopy. The lover docks in a sort of gondola driven by Roman soldiers. Between the two, a slave girl plays the flute.

The composition is bold, letting see through the boats the sea and some elements of antique architecture. According to historians, this scene took place in Tarsus in 41 BCE. Never mind : it especially gives Victorian England the envy of the scandalous pleasures which indulgently appealed the greatest characters of antiquity.

This Antony and Cleopatra is the opus CCXLVI in the chronological list maintained by Alma-Tadema for avoiding counterfeits. This oil on panel 66 x 91 cm was sold for $ 29M by Sotheby's on May 5, 2011 from a lower estimate of $ 3M, lot 65. The image is shared by Wikimedia.

The display of an instant effect into a dramatic action is a specialty of Alma-Tadema and will influence the scenarios and even some framings of the cinema. He is in some way an orientalist precursor of Norman Rockwell. No painter is more typical of Victorian and Edwardian art than Sir Lawrence Alma-Tadema. We are therefore surprised to know that this artist, in fact, was of Dutch origin.

He followed a theme that appealed to the public of his time: the exotic antiques. He was amazed by the collections of the British Museum, and featured his characters amidst monuments for which he relied on photographs. He particularly liked the marble seats in which he showed languid ladies.

Strong personality, he had managed his career and became wealthy and famous. His name was Laurens Alma Tadema, which he adapted to be better positioned in alphabetical lists. He gave an opus number to each of his paintings, creating himself a record that protected his work against counterfeits.

He would not adapt to the trends of modern art, and was forgotten for more than half a century after his death.

The Opus CCCLXXVII is a commissioned work for the benefit of the engineer who had invited him in 1902 at the opening of the Aswan Dam.

Completed in 1904, this large oil on canvas, 137 x 213 cm, shows a scene from the finding of Moses on the Nile. Pharaoh's daughter is surrounded by an opulent procession of servants and slaves. From the top of her carriage, she fondly looks at the baby in his basket, carried by two women.

The image is shared by Wikimedia : Installed in Nice after the war, Henri Matisse resumes his research of colors and compositions with a serenity that Paris could not bring him. With Antoinette and even better with Henriette, he maintains an intimate connivance with his models. Their body becomes the central element of the artwork.

Henriette poses complacently because she appreciates the beauty of her athletic body. In parallel to nude studies, Matisse stages her in orientalist attires that are a new excuse for the shimmer of colors in her surroundings. Her portraits exudes her confidence in the artist without inhibiting her sensuality.

On May 8, 2018, Christie's sold for $ 81M at lot 8 Odalisque couchée aux magnolias, oil on canvas 61 x 81 cm painted in 1923. Please watch the video shared by Christie's. The nice intimacy of this artwork had seduced David and Peggy Rockefeller.

The young woman enjoys the pleasures of idleness, ready to nap or just finishing it. She is reclining on a chaise longue probably in the gate of a veranda. She wears on her shoulders a light shirt completely opened to expose the naked chest to the beneficent sun of the Côte d'Azur.

The orientalist impression is brought by the Persian harem pants which loosely cover the lower part of her body and by the screen behind her whose right panel is centered on two large magnolia flowers.
France
Matisse
Decade 1920-1929
1923

Completed in 1932 for Barnes, la Danse is a key step in the career of Matisse who appreciates that the simplicity of the drawing brings power and emotion to the artwork.

Coming back to a Fauviste expression, he then seeks to associate the rarest and most spectacular colors which he uses to display the clothes of his sitters and the wallpapers. The effect is more important than the image, and the composition has the audacity of a Degas.

This trend results in 1937 in a restart of the Odalisques as a series of five paintings.

The blonde Lydia is surrounded with decorative elements, without the titillation generally associated with the odalisques.. She looks with a close attention at a big bouquet of anemones which may be the major theme of the composition. Its vase is posed beside two oranges and one lemon on the top of a low octagonal column.
Tabletop
Bouquet
1937

Matisse's orientalist approach was the excuse for lush compositions where the balance of colors dominated over the detailed line. However, he was working with European and Slavic models.

Matisse certainly appreciated this gap in his art. In the summer of 1940, seeing by chance a young Turkish woman, he is seduced by the regularity of her oriental face. Nézy is 21 years old. Great-granddaughter of Sultan Abdul Hamid, she lives in exile in Nice with her grandmother who accepts that she sits for the artist.

Matisse became severely ill. Emerging from a long hospitalization in May 1941, he returned to his workshop at the Hôtel Régina. Considering his healing as an unexpected luck, he goes back to an intense work, realizing many drawings of his two muses of that time, Lydia and Nézy.

Painted in January 1942, the Odalisque au fauteuil noir is a portrait of Nézy. This oil on canvas 38 x 46 cm is the culmination of the oriental theme by Matisse. The realistic depiction is limited to the face and arm along with a vase of flowers on a small table. Clothing and decor are a symphony of colors that anticipates the researches of the abstract expressionism.

The Femmes d'Alger by Delacroix, by inspiring Picasso, had a role in the genesis of modern painting. Executed in Paris in 1907, the painting Les Demoiselles d'Avignon shows a group of women. Unlike in Delacroix, they are naked. They are not in the hot atmosphere of a harem but their offering is venal.

It is difficult to recognize the influence of Delacroix upon the Demoiselles because the tribal art that inspired the deconstruction of forms is the real origin of Cubism. Other influences have also been identified for this painting which is one of the most important breakthroughs of Western art : el Greco, Cézanne, Gauguin.

Henri Matisse died on November 3, 1954. Talkative about his own art but secret about his emotional reactions, Picasso did not communicate but it seems that the death of his old rival had deeply shocked him.

Matisse's Odalisques were famous. Picasso had not used this theme which exacerbated the colors and he had been somehow jealous of his late friend. His new muse, Jacqueline, resembles one of the odalisques in the Femmes d'Alger by Delacroix. The new project will be an amalgamation of that Delacroix and of the Nu bleu by Matisse. Les Femmes d'Alger by Picasso is a series of fifteen paintings numbered A to O.

From December 13, 1954 to January 18, 1955, Picasso painted six sketches 46 x 55 cm, sometimes limited to one detail. The day before the end of this first phase, he made an oil on canvas 54 x 65 cm which foreshadows the final work by its overall composition, its brilliant colors and the post-Cubist interweaving of forms.

The next phase is devoted to larger formats, including grisaille paintings which allow the details of the drawing to be worked out. The final version, 114 x 146 cm, is painted on February 14, 1955. The result meets what was undoubtedly Picasso's main objective : making a modern counterweight to the Demoiselles d'Avignon.

The fifteen paintings are exhibited together to be sold as a batch. For that purpose, they should not be considered as fourteen sketches and a final painting but as fifteen versions on the same theme, numbered from A to O in the chronological order of their execution.

Thus the dispersion will not be made under the control of the artist or his dealers but by the Ganz couple who bought the set in 1956 to Kahnweiler for owning the final version (O). The Ganzs will also keep for their collection one of the most complete sketches (C), a style typical of the time of Marie-Thérèse (H) and two grisailles of the final phase (K and M).

The selection of the Ganzs is much judicious. It does not include the 54 x 65 cm complete version of the first phase (F), arguably because it does not bring much beside the O version. The F version was sold for $ 29M by Christie's on July 10, 2020, lot 52. Please watch the video shared by the auction house.

The series of the Femmes d'Alger painted by Picasso between December 13, 1954 and February 14, 1955 does not belong to one single phase of the art of the master, but to many. Taking as a pretext Delacroix's painting, he produced 15 variations, very different from one another, numbered A to O.

The series is an imitation of the styles of Picasso's career starting from his invention of Cubism. The latest version, O, oil on canvas 114 x 146 cm achieved on 14 February 1955, appears as a synthesis of this rather disparate set, like the ultimate completion of Pablo's art on that date.

It takes much imagination to see Delacroix's influence in the Version O, but the comparison with the Demoiselles is obvious. The women are naked or half dressed but in a later cubism style that excites the imagination by blurring the vision. The standing woman on the left displays a much better readability that joins the then recent art of Pablo.

Pablo has always enjoyed to confront himself with the great masters. The large mirror anticipates his series of Las Meninas painted two years later. 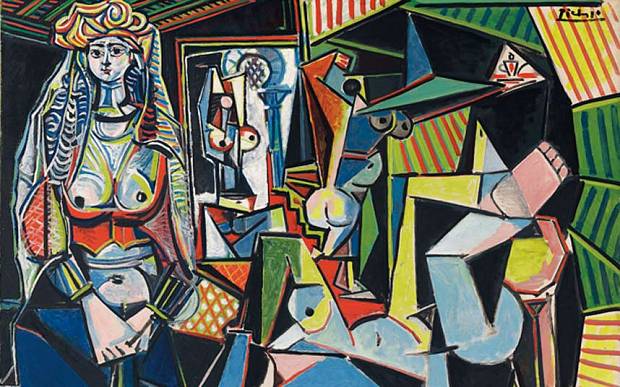 Matisse's death in November 1954 deprives Picasso of a friend with whom he liked to compare his ideas about the essentials of art. Little interested so far by Orientalism, Pablo begins on December 13 his series of fifteen paintings titled Les Femmes d'Alger.

The theme is ostensibly following Delacroix but Picasso leaves no doubt about his real intention by declaring not without humor that he got the legacy of Matisse's odalisques. Remind that Les Femmes d'Alger is a project probably unique in the history of art where the artist carefully imitated several styles used by himself during his long career.

A new series of paintings beginning on November 19, 1955 combines this orientalist fantasy with the exploration of the face and body of his new muse Jacqueline Roque, shown in clothes and attitudes of a Turkish harem from Pablo's imagination. The style resumes the normal course of evolution of Picasso's art.

Meanwhile in May 1955, Picasso and his muse had moved to the villa La Californie in Cannes.

It features Jacqueline as a half length portrait in an armchair. The new Odalisque is adorned with multicolored turban and vest. Her face is almost realistic.

The skin is deep black. The high fez and the costume are in gaudy colored patterns over white. Her crouching attitude with a straight back is in the follow of one of the women in Les Femmes d'Alger.

​This painting is one of the last two of the second and last series by Picasso on the theme of the odalisques.