Henri Matisse was a member of the Sociétédes Artistes Indépendants since 1901. In July 1904, the Matisse family is visiting Signac in his Saint-Tropez home. Matisse is not interested in the physiological theories of colors, and the two artists quarrel. After that stay, their mutual influence will become fertile.

With Luxe, Calme et Volupté painted in the fall of 1904 and acquired by Signac, Matisse tries the pure colors of the rainbow with a divisionist touch. The views of the Golden Horn painted by Signac in 1907 after his stay in Constantinople display similar Fauvist principles while adding in several works his signature search for an extreme brightness.

No painter is more typical of Victorian and Edwardian art than Sir Lawrence Alma-Tadema. We are therefore surprised to know that this artist, in fact, was of Dutch origin.

He followed a theme that appealed to the public of his time: the exotic antiques. He was amazed by the collections of the British Museum, and featured his characters amidst monuments for which he relied on photographs. He particularly liked the marble seats in which he showed languid ladies.

Strong personality, he had managed his career and became wealthy and famous. His name was Laurens Alma Tadema, which he adapted to be better positioned in alphabetical lists. He gave an opus number to each of his paintings, creating himself a record that protected his work against counterfeits.

He would not adapt to the trends of modern art, and was forgotten for more than half a century after his death.

Opus CCCLXXVII is best known in the art market, having been sold $ 2.7 million including premium at Christie's on May 25, 1995. This is a commissioned work for the benefit of the engineer who had invited him in 1902 at the opening of the Aswan Dam.

Completed in 1904, this large oil on canvas, 137 x 213 cm, shows a scene from the finding of Moses on the Nile. Pharaoh's daughter is surrounded by an opulent procession of servants and slaves. From the top of her carriage, she fondly looks at the baby in his basket, carried by two women.

This lot is again for sale, estimated $ 3M, by Sotheby's in New York on November 4.

Analyses will certainly be made to understand this shift in the market for a period that seemed difficult to sell. We can already say with certainty that some artworks will reappear on the market. Expect Gérôme, Béraud, Bouguereau, ... 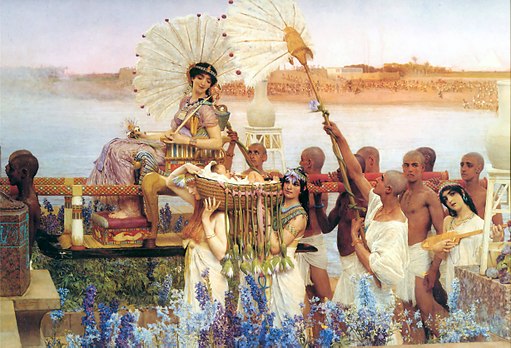 This oil on canvas 65 x 100 cm dated 1904 displays a moment in the early morning on the scenery of the bridge viewed from the East. The yellow bursts of the sunlit break through a misty haze in a radiant glow promising a brighter weather, rarely found in the Waterloo Bridge paintings. Golden reflections appear in the river. The far bank is nearly canceled by the mist.

Belonging since 1851 to the Bulova family of watchmakers, this painting had been recently on long term loan to the Basel Kunstmuseum.

Monet used to observe the Waterloo bridge in the morning when the sun was rising behind it. He considered Charing Cross bridge when the sun light had turned and Westminster from Saint Thomas's later in the afternoon.

This view displays three areas of bright yellow sun light, in the sky revealing the shore, under the arches of the bridge, and on the rippling surface of the river in front of the shadow of the bridge. 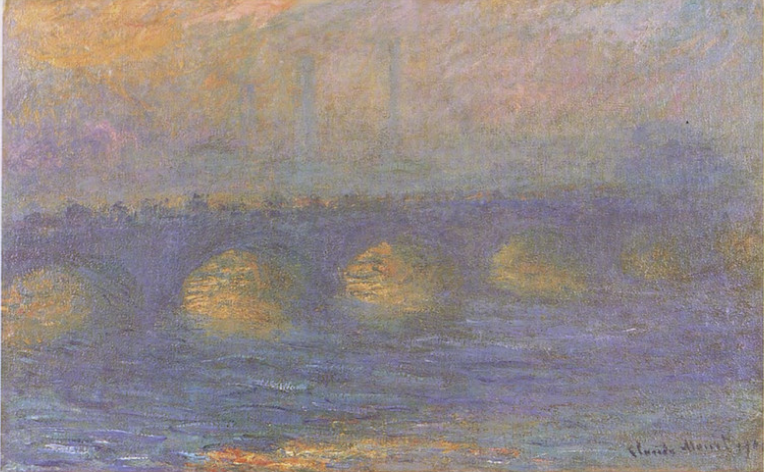 In 1893, when Claude Monet obtains the administrative authorization to create a pond in his garden at Giverny, he already knows that it will be a laboratory for his artistic creation. He was then interested in the reflections in the water of the tall trees and of the Japanese bridge.

Monet is an amateur but careful and skilled horticulturist. Without having his original preference, the water lilies impose themselves as his most prolific theme, up to obsession. Unlike the ivy on the wall, they will not cover the entire available surface. Spreading their leaves flush with water, they materialize in perspective the real surface of the pond.

From 1904 to 1908, Monet produced his first series of Nymphéas. With more than 60 paintings which he wants all different from one another, the artist expresses the most subtle variations of color and light, changing the distance and population of the flowers, the importance of the reflections from the trees and the expressive power of color.

The horizon disappears, the details become abstract but the botanical accuracy remains. An early example in this new figurative style, dated 1904, 81 x 100 cm, was sold for £ 18.5M by Sotheby's on 19 June 2007, lot 7. In this close-up view, the edge of the pond is already off the field, also providing an impression of infinity that anticipates Mondrian.

The cycle of life is the great obsession of Edvard Munch. The stages from love to death are an inexorable tragedy generating a growing anguish : illusion, despair, infidelity, jealousy, humiliation, separation. The artist himself fails to peacefully satiate his sex life.

His meeting in 1902 with Dr. Linde is a relief. Linde, a great fan of Rodin, immediately writes a monograph on Munch's art. In 1904 he commissions a series of paintings from the artist to decorate the children's room in his villa in Lübeck.

Munch achieves this project with about eleven pieces, mostly beach scenes. The artist's old demons have not been annihilated : Linde rejects the set because a few couples are too risque to be seen by his young sons. The paintings, which will be identified as the Linde frieze, are returned to Munch.

Sommertag, summer day, oil on canvas 90 x 195 cm, is an opus from the Linde cycle. Groups of girls symbolize innocence. Unlike Girls on the Bridge, the characters lose their individuality : white dresses and long blond hair are intertwined in blocks.

Munch reworks this painting at an undetermined date. The image becomes Omfavnelse, the embrace. A dark couple has been added to the foreground. The blurry man lowers his head to kiss the woman whose oversized black-rimmed eyes express partner rejection and fear. They are transparent ghosts through which we can see the sea and the shore. The Scream, in 1893, left the possibility of some rescue. Omfavnelse is the post mortem phase. Its terminus ante quem is the great breakdown of the artist in 1908.

From Les Joueurs de Cartes, peasants and country laborers represent the authentic figures of mankind for Cézanne. In 1902, when he opens his studio at Chemin des Lauves for facing the Montagne Sainte-Victoire, he is an ailing man of 63.

The property around the new studio is tended by a gardener named Vallier. The artist has a friendship for this elderly man who represents the last age of life. Cézanne now works very slowly, ever in quest of the suitable color and luminosity for every stroke. Although the portraits of Vallier are a major theme of this phase, he realizes only six watercolors and three oils, still working on one of them when he dies in 1906.

Portrait de Vallier, watercolor over pencil on paper 48 x 31 cm, was sold for $ 17.4M by Christie's on November 6, 2007, lot 31. Interestingly, in this ultimate phase of Cézanne's ever innovating process, the forms are created by the colors, the underlying pencil lines being used as a mere sketching.

Vallier is seated on a chair. His white shirt attests of summer's warm weather. He is stooped and his eyes behind the straw hat's rim and his mouth behind the long white beard do not bring an expression to this allegorical figure. The foliage envelops him with no details, like a halo. Interestingly, another theme of the same period is the still life of skulls.

This watercolor is a preparation to an oil painting made in 1906 with the same cross hands and cross legs attitude of the sitter, kept at the Tate Gallery. Christie's proposes convincingly 1904-1906 for the date range of the watercolor.

The famous reclusive heiress Huguette Clark owned a big cushion brilliant-cut fancy vivid pink diamond. Introduced as the highlight of her jewels, it remained unsold at auction in 2012 on a lower estimate of $ 6M.

Ancient diamonds have a potential for improvement. For example, Graff removed 4 carats from his Blaue Wittelsbacher to improve its clarity.

In her estate, the Clark diamond weighed 9.00 carats with a SI1 clarity that was indeed not exciting.

It is now offered by Sotheby's on May 12 in Geneva. It has been reduced to 8.72 carats to improve its clarity to VS2, guaranteed by GIA. Mounted on a ring between two small D color diamonds, this gem is estimated 13,65M CHF corresponding to US $ 14M, lot 460.

Its provenance was also researched and it received the name of Historic pink. This diamond had been bought by Dreicer at the auction of the estate of Mathilde Bonaparte in Paris in June 1904.

The Historic Pink Diamond, believed to have belonged to Princess Mathilde, Napoleon I's niece, sells for US$ 15.9m pic.twitter.com/sKfQPt92MY

In Greek mythology, Iris is the messenger of the gods. Her mission is to only forward good news. She is also the sister of the Harpies and logically gets a place in the proposed Porte de l'Enfer (Gate of Hell) by Rodin.

In an early version, she is lying on her back. She is a robust acrobat, a hand holding a foot and another ensuring the balance of her splits. Totally and explicitly nude, this woman is often compared with The Origin of the World of Courbet with whom Rodin shares an irrepressible desire to shock the bourgeois.

In 1891, Rodin works on commission on his monument to Victor Hugo. He designs a group of nudes in which the poet is originally surrounded by the three ages of life. It is a bit boring. The sculptor retrieves his Iris for bringing glory to Hugo by hovering over his head.

Iris bronzes made during the lifetime of Rodin are very rare. One of them cast by Rudier between 1902 and 1905 in the large size model, 83 cm high, was sold for £ 4.6 million including premium by Sotheby's in London on June 19, 2007. This example comes back in the same auction room on February 3, lot 22 estimated £ 6M.

Posthumous casts were also executed. A bronze edited in 1966 in the same size by the Musée Rodin was sold for $ 2.9 million including premium by Sotheby's on May 5, 2015.

In 1871, the Hayden survey explores and describes Yellowstone. Nature had created without human help some fabulous romantic landscapes. The scientists are accompanied by two young artists, the photographer WH Jackson and the painter Thomas Moran.

Photos are black and white at that time, so it was left to the paintings of Moran to display to the Americans the extraordinary colors of the Rocky Mountains. Even the Congress is charmed by these images. In 1872 the first national park is established in Yellowstone.

Moran was seduced by this theme that occupied him for his entire career. Inspired by Turner's art, he expressed the deep sensitivity of the landscape in a sharp line that respected the geological realism.

On May 22 in New York, Christie's sells a panoramic view in the Grand Canyon of the Colorado, expressive and contrasted. Painted in 1904, this oil on canvas 75 x 152 cm is estimated $ 8M.

The Bateau-Lavoir in Montmartre was an experimental workshop of modern art in which the residents, whose destiny was to become famous artists, met the harsh realities of life.

In 1904, Picasso's blue period ends when he appreciates that the clowns of the circuses cannot escape poverty. Le Repas Frugal (Frugal Meal) is his first trial in his mature period to create and distribute a pathetic and empathetic image with a universal impact. Its technical and emotional success is total.

​In addition to its extreme rarity, this first edition has another quality : it is also the best. When Vollard took over the plate and inserted it into the series of Saltimbanques in 1913, he strengthened it by electroplating so that it can support its production run of 250.
Prints
Prints by Picasso