In 1954 Mark Rothko is invited by the Art Institute of Chicago to prepare a solo exhibition. He selects eight of his works. The event will have a huge impact on his reputation.

Since several years at that time, he organizes his paintings in confrontations of colors for which the composition in stacks of rectangular blocks is always present but is no longer the essential element.

1954 No. 1 (Royal Red and Blue) is one of the eight works presented in Chicago. It is already  typical of the exceptional understanding of Rothko to achieve the maximum emotional level.

It is very large, 289 x 172 cm. Divided into several shades, the reds dominate. At the bottom of the canvas, the red hegemony is interrupted by an aggressive bright blue rectangle. This painting was sold for $ 75M from a lower estimate of $ 35M by Sotheby's on November 13, 2012, lot 19.

In subsequent years, the reds will increasingly be the major actors in the artistic drama realized by Rothko, taking drama in its etymological meaning of theater. They will now have less need to rely on opponents like the blue of that No. 1. 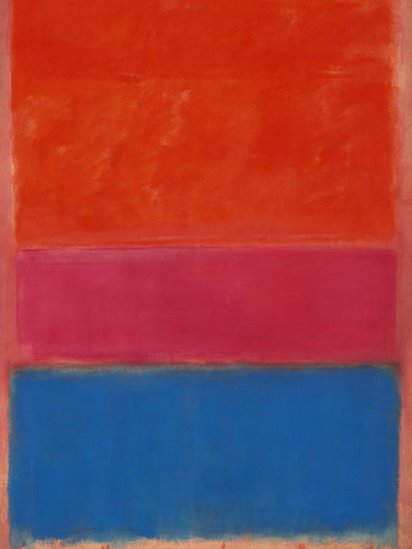 An intense blue can not leave indifferent the modern artists. This cold color brings a physiological feeling of remoteness. It does not mix with the other colors when they play creating harmonies together. When it is dominant, the blue is aggressive.

At the early stage of his signature style in abstract art, Mark Rothko made many proposals for positioning the blue. This color is far from appearing in most of his works but it brings in alternance with the black the very sense of tragic expression that the artist was endeavoring to forward.

When the blue rectangular area is in the lower side of the picture, it wins a stability that reduces the role of the other colors like if it is the monarch in the battlefield. Rothko seeks which color can resist.

The artist finds another competing color in the same year in a dark bright yellow. Blue stubbornly defends its position by invading almost the entire available width in an exception to the usual principles of the artist's composition.

This oil on canvas 243 x 187 cm was sold for $ 46M by Sotheby's on May 12, 2015, lot 11. After the death of Rothko, this painting belonged to the Mellon collection that once included the best set of works by this artist in private hands.

With his immutable pattern of blocks, Mark Rothko goes even further than Malevich in the elimination of the figurative and of the narrative. His colors seek to push away one another in a dramatic confrontation that is different each time. The exceptions deserve an explanation.

No. 7 is well described by its usual subtitle that does not announce a color : Dark over Light. Another subtitle which is sometimes used is White and Black on Red. Both blocks are centered but the black upper block is wider than the white lower block. This dark part is very homogeneous in density, which is also unusual.

Rothko composed his artworks very carefully but he also foresaw their respective roles. It was necessary to capture the visitor  as soon as he entered the room, without his attention being attracted by ambient decorations. In 1957 in Houston, Rothko hangs this No. 7 in the first room. The visitor is attracted by the intense light emanating from its fake white window. The black block is of lesser importance and serves primarily for the contrast.

Françoise left in September 1953 with the two children, Claude and Paloma. A distraught Picasso is looking for a new muse in Vallauris. In April 1954 he sees Sylvette with her long blonde ponytail. The shy 19 year old agrees to meet the artist but fears his flirtation.

Pablo already knew the brunette Jacqueline who has a job at Madoura. She accepts to live with him. In June Pablo paints his first portraits of Jacqueline. She is 28 years old and Picasso 45 more. They will not leave each other and will marry in Vallauris in 1961.

A quarter century before, Picasso sorted the blonde Marie-Thérèse from the the street for her physical features thet could help him in his career. It is not by chance that his new muse Jacqueline looks like one of the Femmes d'Alger by Delacroix with her black hair, dark eyes and straight nose.

On October 8, 1954 Pablo paints three oils on canvas in a single size, 146 x 114 cm. Jacqueline in long dress is crouched on the floor in an interior, hands clasped around her raised knees.

In this new series painted shortly before the death of Matisse, Pablo wants to demonstrate his skill as a colorist. It is sunny in Vallauris and the blue sky behind the window provides a bright atmosphere. Realism and proportions are not considered : the artist uses his signature style of simultaneous vision of two profile faces of the sitter and the limbs are too frail. The lozenges and half lozenges of the skirt provide a geometric element.

What sort of pictural frenzy caught Picasso on October 8, 1954, when he executed three large size Femmes accroupies in a similar composition, technique and size, 146 x 114 cm ?

The portraits of Jacqueline as the Femme accroupie did not stop after the frenzy of October 8, 1954.

The darker face is not displayed in a dual viewpoint, excepted for the nose. The expression of gaze and mouth is quiet up to some sadness. The hair is superseded by a white cap.

A few weeks later, Picasso started his own Femmes d'Alger starring Jacqueline as one of the characters. Matisse had died in the mean time. Afterward Pablo had no restraint displaying Jacqueline as his own odalisque in a tribute to Matisse.

The Giacometti brothers were inseparable, before the war, when they worked together for the decorator Jean-Michel Frank. Later, while Diego continues his career in furniture items, Alberto endeavours to express the mystery of man.

From that time the art of Alberto is double: he reached fame as a sculptor, but his paintings and drawings are similarly important to understand his creative act.

The drawing, in general, is an expression of spontaneity by the line. The paintings of Alberto are lines in oil on canvas, relentlessly modified with a range of brushes until he achieves the desired effect, usually in monochrome with a neutral background.

Now Alberto is a portraitist. Same as in his sculptures, he sees the head as the juxtaposition of organs, without giving an importance to the overall shape or even to the proportions. He explores one of the greatest mysteries: all men are similar, but each individual is recognizable.

In this painting, the work of the line is intense and meticulous, just like Alberto was still exploring the features of his own graphic style. For once, he also allows the use of color by adding some red to the Scottish shirt of his brother.
Giacometti

The post-war artists feel an irrepressible need to shout their disgust. Among them, Francis Bacon chooses a shocking representation. In 1948, he began his series of screaming Heads. The huge round mouth is an image inspired from the Battleship Potemkin film by Eisenstein.

The most powerful man on the planet is as weak as everybody. Head VI was Bacon's first work that was directly inspired by the portrait of Innocent X by Velazquez. The papal throne, not visible in the first image, has become a straitjacket, and the character has lost any freedom of movement.

Bacon executes many studies on this theme that soon makes him famous. A network of vertical or oblique lines more or less colored come to still more imprison that symbolic post-war Pope.

Executed circa 1954, the oil on canvas, 152 x 94 cm, was sold for $ 30M from a lower estimate of $ 18M by Sotheby's on November 13, 2012. The head and hands are the only clear spots in this dark composition. It is a masterpiece of the expression of anguish. Please watch the video shared by Sotheby's.
Bacon before 1963

Everything goes very fast, in any meaning of the word, for Mercedes-Benz at the beginning of 1954. Technology is the best asset to win competitions. For coming back to racing, the German brand aligns the 300SL model for endurance and the W196 single-seater model for Formula 1.

They must win. Mercedes managed to take the best driver, Juan Manuel Fangio, world champion in 1951 with Alfa Romeo, who had just won the first two grand prix of the season on a Maserati.

For their first collaboration, Mercedes and Fangio win the Reims grand prix on a W196 with enclosed wheels. Surrounding the wheel by a piece of bodywork is a theoretical advantage because it limits the impact of air friction. The top speed exceeds 200 km / h.

At that time, the skill of the pilot is prevailing on theories. The next grand prix, at Silverstone, is sinuous. Powerless against Ferrari, Fangio requires the withdrawal of the enclosing to improve his freedom of action. This is the right decision.

Thus are born the chassis 005 and 006 of the W196. With the open wheeled 006, Fangio wins the next two grand prix, in Germany at the Nürburgring and in Switzerland at Bremgarten.

The 006 has no rival for the title of most prestigious single-seater car of all time, formerly driven by the most skilful driver of all time. It was sold for £ 19.6M on July 12, 2013 by Bonhams.

An open wheeled W196 (perhaps the 006) is driven by Fangio himself during a demonstration at the Nürburgring in 1986. The image below is licensed under Creative Commons with attribution By Lothar Spurzem [CC-BY-SA-2.0-de (http://creativecommons.org/licenses/by-sa/2.0/de/deed.en)], via Wikimedia Commons. 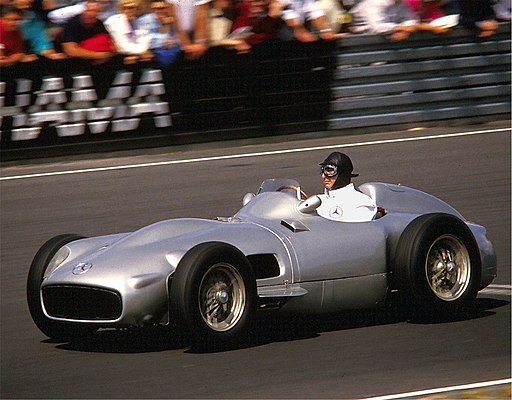 In 1954 Ferrari is once again increasing the power. The new model is the 375 Plus, with a volume of 4.9 liters which provides a tremendous power and earns it the nickname of Fearsome 49. Five cars are made.

Used extensively in competition in 1954 notably with Maglioli, this car was owned for a short time in 1955 by Kimberly. Dismantled by a subsequent owner, it was restored in a satisfactory state of authenticity including the reassembly with its original engine.

The technological achievement of this line of models is the 410 S, built in four units in 1955.
Early Ferrari