In Greco-Roman antiquity, knowledge was transmitted and enriched by compilers. Chronologically, Ptolemy appears between Pliny the Younger and Galen, in the 2nd century CE. His celestial compilation totaled 1,022 stars grouped into 48 constellations. His geography listed the positions of 8,000 localities. His proposed method for drawing maps was a new algorithm for projecting the sphere onto a flat surface, developed from Euclid.

This monumental work is ignored in the Christian world and rediscovered by astronomers in Baghdad at the beginning of the 9th century. Around 1300 CE the Byzantine scholar Planudes finds a Greek version of the Geography of Ptolemy, which then takes the name of Cosmographia, and reconstructs the maps. A Latin translation of the text in 1406 by Jacobus Angelus is used for the first printed editions.

The 26 maps based on Ptolemy's informations are engraved on copper plates prepared by Taddeo Crivelli. They are published with the text of Jacobus Angelus in Bologna in 1477. Each map occupies a double page 42 x 56 cm overall, which is the prestigious Royal folio format used in particular by Gutenberg in his Bible.

On October 10, 2006, Sotheby's sold a complete copy of the Bologna Cosmographia with in period hand-coloring and binding for £ 2.14M, lot 394. It most certainly belonged to the bibliophile Hieronymus Münzer, who started his collection of printed books in 1476 and was also a keen traveler. This undocumented provenance is made plausible by its later belonging to the humanist Pirckheimer from whom a letter containing a posthumous praise of Münzer is known.

The next step is the integration of the explorers' discoveries. From 1477 Nicolaus Germanus creates a terrestrial and a celestial globe. In 1482 the Ulm edition of Ptolemy's Cosmographia is the first modern atlas, integrating the maps of Nicolaus.
Incunabula
Years 1460-1479

The cartographer Battista Agnese produces in Venice handwritten maps to constitute composite atlases, the contents of which vary for different clients.

Although his nautical maps fully use the classic portolan representation, his customers seem to have mostly been sovereign princes and great prelates. For example, he assembled circa 1542 on commission from the Emperor Charles V an atlas for the use of Prince Philip, later Philip II.

Agnese takes great care to integrate the most recent discoveries. When Ulloa observed in 1540 that Baja California was a peninsula and not an island, Agnese immediately applied this information while also including the new place names defined by the explorer. The maps are illuminated with full-cheeked figures of the winds at the four cardinal points and at four or six intermediate points.

This collection, in a binding from the early 18th century, has the very rare characteristic of being considered complete. It consists of 15 bifolium vellum plates 18 x 25 cm with blank reverse, including twelve two-page maps.

The first ten maps are portolans from the three oceans (Pacific, Atlantic and Indian) and the seas, not to forget the Black Sea. The next one is a world map in oval projection which includes the parallels and meridians and the line of Magellan's circumnavigation. The last map displays the North Atlantic in globular projection.

The atlas is not dated but is dedicated to Adolf von Schaumburg during the very short period when he was administrator of the archdiocese of Cologne, in 1546. He was appointed in January 1547 archbishop elector of that city.
Ancient Maps

At the time of the great discoveries, the Cosmography of Ptolemy becomes obsolete. Geographers establish new manuscript maps. Specialized workshops print these documents. Rome provides the maps of Italy and Venice those of the rest of the world.

Unlike the Ptolemy-based compilations, the new maps are sold individually or in composite sets depending on customer needs. The first assembler to mark his name on the front page of a composite set is Lafreri, around 1570. In 1570 in Antwerp, Ortelius finally designs a book with constant content and standardized format. The word Atlas is used for the first time in 1595 for a posthumous edition of Mercator.

The Doria Atlas is a collection in the style of Lafreri, with maps of various origins and formats, the largest of which have been folded several times. It is made of two volumes for a total of 186 maps.

The first volume consists of printed maps, the latest date of which is 1570. The main contributor to the plates is the Venetian Ferrando Bertelli, who may have assembled the whole of this volume. The first map of the first volume, printed by Cimerlinus in 1566, is a reissue of the heart-shaped world map prepared in 1536 by Oronce Fine also known as Orontio. The image is shared by Wikimedia.

In the second volume the maps apply mainly to the commercial, military and political interests of the Doria family and to the French religious wars. One of the latest is a bird's-eye view of the Siege of Mantua in 1628. Several maps are manuscript.

This atlas has long belonged to the Doria family. It is assumed that the first volume was assembled for the use of the Genoese Admiral Giovanni Andrea Doria, grandnephew and adopted son of the condottiere Andrea Doria.

A copy of the Cimerlinus world map was sold by Arader Galleries for $ 310K before fees on January 25, 2020, lot 150 here linked on LiveAuctioneers bidding platform. 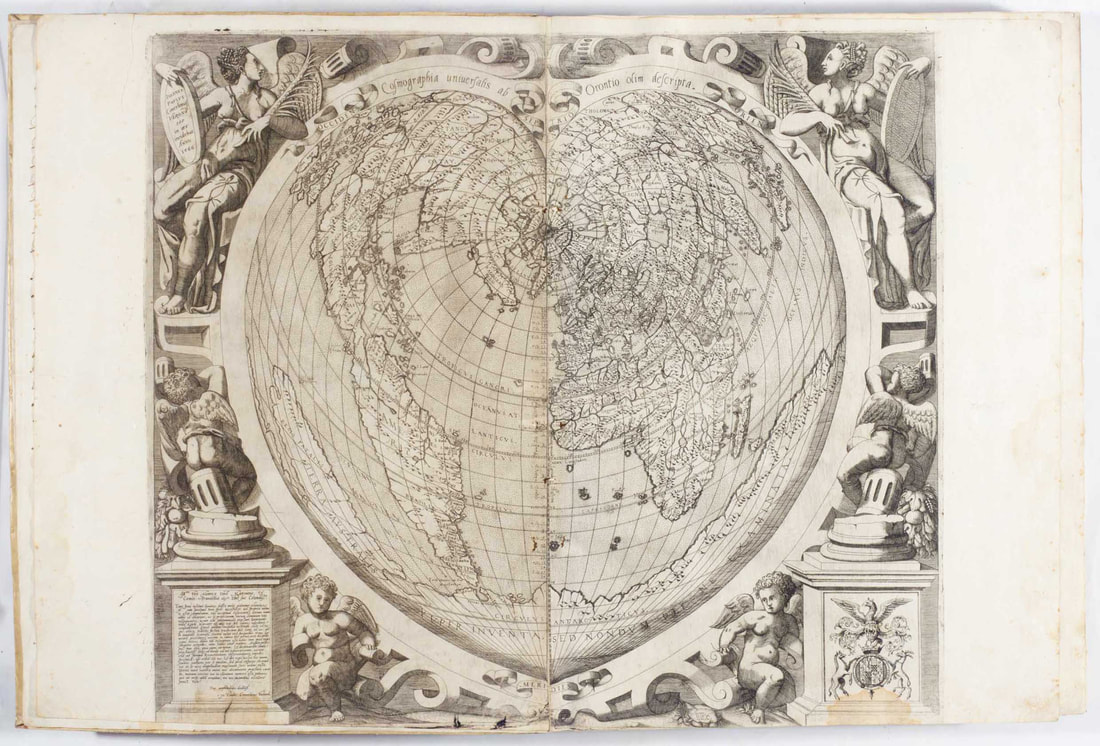 Abel Buell, a printer and engraver operating in Connecticut, was too skilled and too clever. He was sentenced to jail in 1764 for a counterfeiting of colonial paper money. The sentence is accompanied by a partial removal of one ear and tongue and a mark of infamy on the forehead, which are applied without excess by the executioner due to his young age, 22.

The Treaty of Paris, signed on September 3, 1783, ended the War of independence and defined the new external borders. It was ratified on January 14, 1784 by the US Congress and became applicable on May 12.

For Buell, this recognition of the United States is an opportunity. He prints a wall map, in four sheets with vertical joints for a total dimension of 115 x 129 cm, which he announces on March 31, 1784. McMurray's map, which refers to the same treaty, is manuscript and smaller, 67 x 96 cm.

Buell is not a geographer. His map reuses the work of colonial cartographers. The borders between the thirteen states are not yet fixed, and he takes the opportunity to extend his state, Connecticut, to Mississippi.

This map was only printed in two successive variants, before and after the copyright inscription. The first state is known in a single copy kept at the New York Public Library.

One of the six surviving copies of the second state was sold on December 3, 2010 by Christie's for $ 2.1M, lot 32. It has been hand colored and is one of the best preserved copies despite some misses on the edges of the sheets. The image of this specific copy is shared by Wikimedia.

The purchaser, David M. Rubenstein, entrusted its conservation to the Library of Congress. This philanthropist had bought three years earlier the last copy in private hands of the Magna Carta to lend it to the National Archives 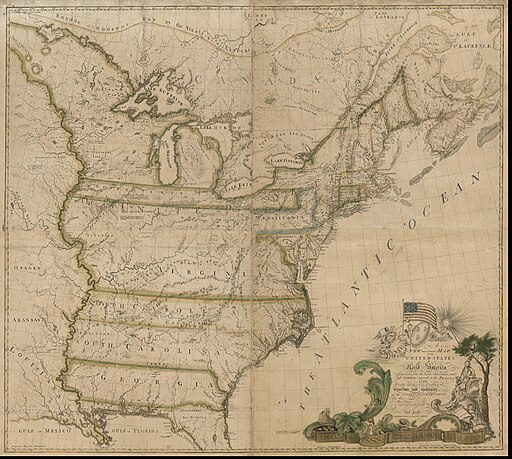 Artist in the abstract and lettrist styles, Alighiero Boetti wanted to express the globalization of time and space. The name of this universal minded Italian could be a pseudonym in tribute to Dante and Boethius, his two famous compatriots from ancient times. Not at all : it was his real name, sometimes used as Alighiero e Boetti.

In addition to his personal work, he managed from 1971 a fertile idea in the follow of his hippy trek in Asia. He chose then as a theme the Mappa, the map of the Earth, which he made hand woven by Afghan women, as a tribute to the endangered survivance of folk art within the modern world.

​The design is fixed : they are the continents. The choice of colors of earth and sea is made by the craftsman, along with his possible selection of a text for the border. The flags of the nations, embroidered at the place of their geographic location, follow over time the political changes in a lifetime output of 150 works.

A precursor by the same artist had been in 1969 a Planisfero Politico where he decorated some blank countries of a paper world map with their national flags.

December 1979 was a key date in Boetti's art business, for political reasons. The invasion of Afghanistan by the USSR deprived him from access to the Kabul workshops where his Mappe were woven.

To reflect these political turmoil, the Afghan flag is superseded by the inscription in farsi of the defeated Khalq party, demonstrating an increased autonomy of the weavers and a renewed interpretation of the role of the artist in his own art. It certainly pleased the former hippy keen to promote the multi-cultural dimension of his Mappe.

Also for political reasons, the Namibian flag has been removed. The ocean is a deep rose pink, possibly to avoid an extensive use of blue threads then under shortage in Kabul.

In 1984 the artist also began to work with weavers displaced to Peshawar, Pakistan, by the political events.

In the later 1980s, Alighiero Boetti's colors of the Mappe converge to blue seas, which effectively offer a nice contrast with the other colors.

It is dated in Persian script 1360 AH matching 1988-1989 CE and bears on the border among other inscriptions a motto of the artist revealing his desire to control the time despite the unstable contours of the political countries : a tempo, in tempo, con tempo, il temporale.

Another Persian inscription regrets the recent history of the beautiful Afghanistan which was had been no more accessible to his business for a few years after the 1984 Soviet invasion.

The tapestries would take from a few months to several years to complete. In the above example, the flags and borders keep their 1988 figures before the 1989 termination of the Cold War.

Its deep blue oceans distinguish it from the other examples. It is inscribed in Farsi in its border with a quote from the medieval poet Sa'di whose English translation is 'Of One Essence is the Human Race, Thusly has Creation put the Base', accompanied by a temporal Italian statement by the artist.

This encounter of mankind and time and of East and West reflects a new hope for the world as the termination of the Cold War is in view, to be formally assessed by Gorbachev and Bush in December of that year.

In this specific Mappa the written instructions of the artist for the colors have been incorporated by its makers into the woven design of each flag.

This embroidery on fabric is dated 1989, 90 and 91 and inscribed Peshawar Pakistan by Afghan People on the overlap. These three years saw the fall of the Berlin wall, in November 1989, the dissolution of the Soviet Union in December 1991 and the deletion of the iron curtain in Eastern Europe. This Mappa is indeed a swan song of the sickle and hammer as a national symbol.
Textiles
1989