In the history of industry, the merger in 1926 of DMG (Daimler) and Benz is an exemplary case. Their product lines took benefit from the quality of their manufacturing but the German crisis could lead both of them to bankruptcy. Their combination, including the creation of a single Mercedes-Benz brand for the group, provided the new company with the critical size needed for a restart.

Pushed by the prestige of the competitions, the power is gradually increased. The new Mercedes-Benz company introduces the Typ S (Sportwagen) in 1927 as the successor to the Mercedes Model K. A specialty of Daimler had been to equip their Mercedes cars with a Roots supercharger.

For the new brand, the chief engineer Ferdinand Porsche designed in 1927 the most powerful sports car of that time, the Mercedes-Benz 680S with a huge supercharged 6.8 liter engine. The supercharger was only engaged when the pedal was depressed.

In terms of bodywork the Sindelfingen factory offers the high-end but the customer may also buy the chassis and have the body realized by a craftsman.

This highly authentic Sportwagen is in matching number configuration and retains its original Sindelfingen body.
1927

Made in 1928 and sole survivor from three built with a low windshield, a Mercedes-Benz 680S 26/120/180 hp coachworked by Saoutchik as a Torpedo roadster is a great example of the perfection and modernism that could be achieved at that time.

Its mechanics are German but the elegance is French. It is an early masterpiece by Jacques Saoutchik, a former cabinetmaker inspired by the Parisian Art Déco who knew to combine style and innovation. Made on order for an American businessman who failed to take it after a reversal of fortunes, it was exhibited at the New York Auto Salon in 1929.

It is believed that its body has never been changed. The records of the brand state that the chassis has been shipped to Gläser. This coachbuilder was based in Dresden.

It was owned by one family for nearly six decades. https://t.co/H9CmD5Ci3n

Mercedes-Benz introduces the Typ S (Sportwagen) in 1927 and the short wheelbase Typ SSK (Super Sport Kurz) for competition in 1928. They were claimed by their manufacturer as the fastest sport cars in the world. The long wheelbase model was referred as Typ SS.

This car had been the lifelong cherished property of the British enthusiast who had acquired it in 1941. Due to the impossibility to find German spare parts in England during the war, he had joined to it in his garage a Mercedes-Benz Typ SS 38/250 from 1930.

At the first edition of the 24 Hours of Le Mans in 1923, Bentley achieved a satisfactory result with the 4th place of a 3-liter model. A car of that model wins this competition in 1927. The British brand develops the 6 1/2 liters in 1926. Problems of reliability of the 6 1/2 lead to finding a satisfactory compromise in 1927 with the 4 1/2 liters.

In 1928 Bentley prepares three 4 1/2 coachworked by Vanden Plas in Le Mans configuration for its factory team. The shortened shape of its engine cowling is one of the modifications necessary to meet the rules of the competition and brings to this rare variant the nickname of Bobtail. Impressive in its speed, the Bobtail # 2 leads the race for several hours before being forced to abandon by overheating.

The development continues with the Speed ​​Six, direct successor to the 6 1/2 liter, and with the supercharged version of the 4 1/2 designated as the Bentley Blower which becomes a formidable competitor to the Mercedes-Benz which were using a similar improvement of the engine.

A new era began in 1926 for Bentley Motors when Barnato acquires the financial control of that British brand of luxury cars created in 1919.

For sport and specially to win at Le Mans, two concepts were clashing. The founder W.O. Bentley is in favor of huge engines like his 6 1/2 liter model to get more power by an extension of the mechanical movements.

Pushed by the flamboyant team of the Bentley Boys, Barnato prefers supercharging the engine of the 4 1/2 liter model. This new model is known as the Blower Bentley. It had to overcome the reliability problems rightly predicted by W.O. The single seater version nevertheless met some racing success.

In addition to five works prototypes, fifty supercharged cars had been commissioned for complying with Le Mans homologation requirement.

Barnato had also founded a scuderia of champions symbolizing the daring of British sportsmen, the Bentley Boys. Prepared for racing, the heavy single-seater with a very long chassis is fast, strong and spectacular. Its main competitors, the Bugattis, were frail and light compared to this new monster of the circuits.

In 1931, this car had broken the lap speed record of Brooklands at 215 km/h (134 mph), driven by the most charismatic of the Bentley Boys, proudly wearing a military mustache, "Tiger Tim" Birkin.

Please watch the video shared by Bonhams, which includes extracts from silent films to remind the extraordinary speed, at that time, of this successful car.

​Its image is shared by Wikimedia with attribution | El Caganer / Craig Howell [CC BY 2.0 (https://creativecommons.org/licenses/by/2.0)] 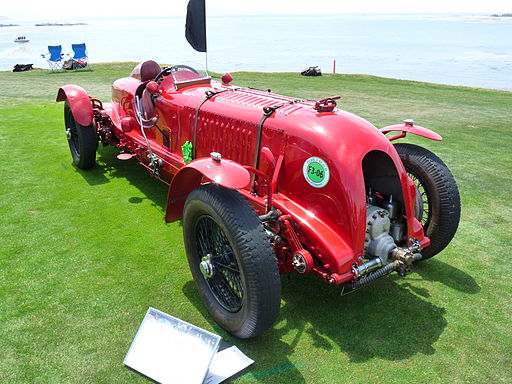 Ladies no longer want to be excluded from motorsport. In 1926 the dowager duchesse d'Uzès founds the French Women's Automobile Club, offsetting the ban on women to be members of the Automobile Club de France.

Automobile meetings, often organized by newspapers, are very popular. They consist of a wide variety of events, including feminine elegance contests that appeal the starlets. In 1929, commissioned by a fashion magazine, Tamara de Lempicka paints her imaginary self-portrait driving a green Bugatti.

Eliska Junkova, racing under the pseudonym Elisabeth Junek, is the first woman capable of competing with men in major races. With a Bugatti 35 B, she finishes 5th in the 1928 Targa Florio after having led the race during the second lap.

Janine Jennky was a performer in Pigalle vaudevilles. In 1927, she bought a Bugatti 35 C with which she won the hill climb race at Gaillon.

In 1928 she sold her first Bugatti and bought another 35 C which had been entered in the works team in the Targa Florio. With this second car, she wins the Coupe de Bourgogne. She thus becomes the first lady to win a Grand Prix, and will remain the only one to ever achieve this feat. Wikimedia shares an image published by Le Sport Universel Illustré featuring Mme Jennky in action during this competition, ahead of the Bugatti 37 A of Mme Schell..

She failed to return to competition in 1929, probably for health reasons. She disappears from history after having sold her second 35 C to Jean de Maleplane who will win in 1930 the Grand Prix d'Oran.

This 35 C is a typical example of the legendary robustness of the Bugattis. Despite significant use in competition by its first three private owners, it is still in perfect working condition with its original engine, chassis, bodywork and pieces of equipment.

Released in 1927 the 35B is a culmination of the highly successful Bugatti 8 cylinder Type-35, associating the biggest engine volume of the range, 2.3 liters, with a Roots type supercharger.

Nevertheless the 35C remains the most successful in racing with its top speed of 202 km/h quite comparable with the 210 km/h of the 35B.

The day of fame of the 35B went on June 30, 1929 at Le Mans when a newly built works car driven by William Grover-Williams won the Grand Prix Automobile de France after leading from start the 37 lap 4:30 hour race. Its image with its driver is shared by Wikimedia from a press agency photo.

That competition was managed by the Automobile Club de France which had some specific rules concerning the fuel consumption. Back from Le Mans, the winning car was fitted with the usual pointed tailed body of the Type-35 Grand Prix. It was sold to Louis Chiron who drove it to victory in the Spanish Grand Prix at San Sebastian a few days later, on July 25, 1929.

Returned in 2006 to a period appropriate appearance using much of its Molsheim Grand Prix bodywork, this twice Grand Prix winner is still fitted with its original engine, chassis frame, supercharger, gearbox, rear and front axles. It is painted in French blue. 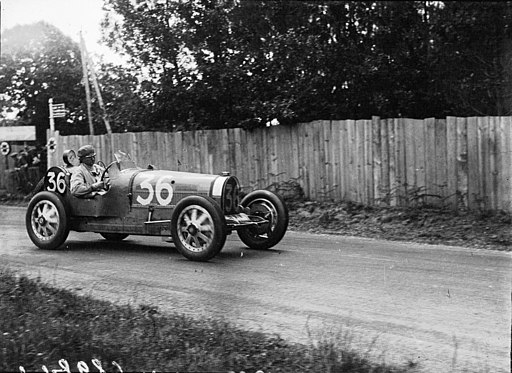 Sporting a powerful 2.3-liter, eight-cylinder engine fitted with a Roots-type supercharger, this 1929 #Bugatti Type 35B was the winner of the 1929 French and Spanish Grand Prix with Williams and Chiron. #PebbleBeachAuctions
-
Learn More: https://t.co/9KpoRDWITw pic.twitter.com/UIke7oE95p

In 1926 Duesenberg became a subsidiary of Auburn, owned by Cord. During the next ten years, the three brands manage a concerted effort to master the full range of American luxury cars. In this association, Duesenberg targets the rich and famous.

1929 is a breakthrough year for many reasons. The creation of Cord Corporation streamlines the legal structure of the group. Released in December 1928, the Duesenberg Model J chassis emerges as the best in its class. The Lycoming 420 cubic inch straight-eight engine is producing 265 hp at 4,200 rpm. The dual cowl phaeton bodywork is a spectacular novelty.

The Model J rolling chassis was based on a sturdy ladder frame in alloy steel designed for top performance. Conceived as a competitor to Rolls Royce and Isotta Fraschini, it targeted the wealthy US customers from Hollywood and elsewhere.

​Various leading coach builders including Murphy in California, LeBaron in New York and Derham in Philadelphia prepared open bodied cars suitable for enjoying the roads under the American sun and for being better visible by the public.

​Various body types were offered by the Walter M. Murphy Company, located in Pasadena in the vicinity of Hollywood. The bodies were handcrafted and no two were exactly alike.

The pinnacle of the 1929 Model J by Murphy is the Disappearing top torpedo convertible coupe, different from the basic coupe by its tapered speedster boattail. Only two were fitted with a lightweight coachwork in polished bare aluminum.

​One of them is in beautiful condition, featuring much of the original aluminum carefully restored for a maximum saving. Its chassis is original but the engine has been replaced by a period correct Duesenberg engine. It was sold for $ 5.7M from a lower estimate of $ 3.5M by RM Sotheby's on May 22, 2021, lot 156. Please watch the video shared by the auction house.
Duesenberg
Cars of the 1930s
Cars 1930-33