From 1948 to 1953, Barnett Newman expressed his conception of the creation of the world in a series of six paintings titled Onement and numbered from I to VI. These monochrome works are crossed in the middle by a narrow vertical strip visible in another color after removal of a sparing tape. The strip is identified as the 'zip'.

The impression of homogeneity is false, as different techniques are used for applying color until the differences become almost imperceptible. Through his painstaking care, the monochromes of Newman precede the pop art flags of Jasper Johns.

The apparent simplicity of the result expresses the false uniformity of the universe. The central zip is designed as an assault by an all-powerful force.

In 1953, Onement VI is the apotheosis of the series, in the metaphysical meaning of that word. The space, still dark blue, becomes huge and almost square, 300 x 260 cm. The light blue zip is the first in the series to have sharp edges, predicting the victory of the disturbance on the established order.

Onement VI is estimated $ 30M, for sale by Sotheby's in New York on May 14. It is illustrated on the summary shared by Art Market Monitor.

I invite you to watch the video shared by Sotheby's.

Onement VI is an iconic work, able to propagate at their best the messages and searches of abstract expressionism. It was sold $ 44M including premium.

In 1952 Mark Rothko needs to redefine his creativity. He now has a better workshop that allows him to consider larger vertical formats. At the same time, the rise in popularity of the abstract expressionist movement generates jealousy from the other artists including Newman and Still. It is true that Rothko's blocks simulating mystical confrontations are really understandable only by himself.

The new workshop is close to the MoMA. The contemplation of Matisse's Atelier Rouge is a new starting point for Rothko. In this oil on canvas painted in 1911, Matisse has limited the image to a very saturated dark red wall to which a few small objects bring their contrasting colors. Despite the presence of the table and floor, the perspective is almost annihilated.

In 1953 Rothko continues his main theme of assembling rectangles of bright colors. Yet some paintings are directly inspired by the Atelier Rouge. This is undoubtedly the case for Blue over Red, oil on canvas 163 x 89 cm. On an orange background modulated with ochre and yellow, the blocks separated by strips of light are not very contrasted, with the exception of a bright blue band in the upper part of the image which could be a painting on Matisse's wall.

Blue over Red was sold for $ 5.6M including premium by Christie's on November 8, 2005. It is estimated $ 25M for sale by Sotheby's in New York on November 14, lot 26. Please watch the video shared by the auction house.

This influence has been fruitful for the artist. He will now look for illusions of the pulsation of light by the contradictory forces of dilatation and contraction, and will soon replace the garish colors with dark hues.
Early Rothko

A Dadaist and a Surrealist, Max Ernst enjoyed fancy. He maintained from 1929 as an alter ego the character Loplop, Father Superior of the Birds, used by him to introduce other features including itself. He began to sculpt in 1934 with his then fellow surrealist Giacometti.

Ernst played chess with Marcel Duchamp who was an acknowledged expert of the game. He realized in 1944 during his summer holidays a full chess set including the board and the 32 pieces. He played also with his partner and future wife Dorothea Tanning.

Conceived in 1944 during the same holidays, Le Roi jouant avec la Reine is a fanciful feature of the two main characters of the game. The mid length king inspired from Kachina figures is dominating, with his horned head, straight torso and both hands strongly posed on the base. His attitude reminds a player studying the game. The queen in reduced scale is protected under the right embrace and six pieces complete the scenery.

Ernst presented the plaster to fellow artist Robert Motherwell. Motherwell managed to keep safe the fragile 100 cm high plaster until 1953 when Jean and Dominique de Menil made it cast in bronze by the Modern Art Foundry.

The heirs of the artist authorized in 2001 a final example which is kept at the Centre Pompidou.
Man and Woman
Sculpture by Painters
Germany - 2nd page

The artists of the twentieth century have greatly admired Velazquez. Francis Bacon goes further: his many studies of Innocent X are a great example of appropriation. Any pope is a human, and therefore has the ability to scream, but which message does he screams so? His social position does not allow such an arrogance.

In the artistic language of Bacon, a man who does not scream may be even more terrible because he does not eject his tensions. Painted in 1953, the Study for a portrait for sale by Christie's in London on June 28 anticipated by a few months the Man in Blue series.

On this large oil on canvas, 198 x 137 cm, the anonymous man is sitting in an armchair, like a pope. Attention is drawn to the ageing serious face and to trivial attributes of social success like the glasses and the tie. The rest of the subject melts into the dark and sinister atmosphere.

This portrait is like a mirror where the viewer sees his own banality charged by empty feeling. This is a key work in the artistic development of Bacon.

POST SALE COMMENT
​
The price, £ 18M including premium, is consistent with the fact that it is a key work in the art of Bacon.
Bacon before 1963

Françoise Gilot was 22 years old when Picasso, 40 years older, took her as his mistress, superseding Dora. They had two children, Claude and Paloma. She is an artist and a strong personality. She early knew that she would leave when she gets bored of him.

At 71 in 1952 Picasso had certainly believed that his artistic skill would be sufficient to keep Françoise with him at Vallauris, and he was still looking elsewhere for affairs with other women. In late 1952 and early 1953, he made a series of portraits of Françoise, in a high variety of styles that anticipate by two years the fifteen versions of Les Femmes d'Alger.

A thread of the Françoise portraits is the color green, symbolizing this woman whom Picasso had nicknamed La Femme Fleur at a better time.

In this opus the contrast is striking between the uncolored stylized face drawn in the signature double angle of view of the artist, and the vegetal green clothing. The seated Françoise is not Dora : Pablo did not even try to lock her in the armchair. She left in September and restarted her artistic career.

The woman was a major theme of De Kooning from the early time when he was looking along with Arshile Gorky for the border between figurative and abstract. His third series of Women, from 1950 to 1955, is the most innovative, marked by alternating enthusiasms and discouragements of the artist.

De Kooning is in quest of the eternal woman who inspired artists since the age of the stone idols. More than her femininity, he expresses her fertility in a standing attitude characterized by opulent breasts. The head is only a useless excrescence in this slightly down-up vision. His drawing is reminiscent of the synthetic cubism.

The result is at the opposite of the aesthetics of his time despite an expressionist use of color. An art critic said in 1953 that De Kooning "had gone too far, but that is the only place to go".

The inspiration goes on a same path for the idols of ancient times and for the modern naive artists : the series of Corps de Dames by Dubuffet, the prophet of Art Brut, is also starting in 1950 and offers a similar vision of morphology.

A hanging mobile 150 x 204 x 89 cm executed by Calder in 1953 is made of 21 metal elements, all painted in a resplendent pure white. The difference with the Snow Flurry is the varied shape of the plates.

The concept car is a marketing operation promoted post war by Harley Earl for General Motors. Production chassis are fitted with futuristic bodies and displayed in the Motor Shows to elicit reactions from the public and the journalists.

Franco Scaglione is a stylist with an experience in clothing. The car is his passion. Before the war, he had a training in aeronautics and his project is to design an aerodynamic car. Of course he will have to cooperate with a coachbuilder.

Manufacturers have their own design offices and their sub-contractors and are reluctant to hand over such major tasks to an ambitious newcomer. Bertone finally accepts. On the Fiat stand at the Turin Motor Show in 1952, the Abarth 1500 Biposto is a concept car designed by Scaglione and built by Bertone.

In the same year, Alfa Romeo chooses Carrozzeria Touring over Bertone for the design of its new racing car, the Disco Volante. The Bertone-Scaglione team persevers however and develops the B.A.T. (Berlina Aerodinamica Tecnica) based on the road going Alfa Romeo 1900.

These performances are all the more remarkable as they are solely due to Scaglione's pencil and Bertone's know-how, without wind tunnel tuning and of course without a computer. With such simplification of forms, the three B.A.T. are works of art.

Each of these prototypes was sold after its Salon. They were brought together for the first time in their history at the Pebble Beach Concours d'Elegance in 1989 in the presence of Bertone, following which a keen collector managed to acquire all three vehicles. The trio is estimated $ 14M for sale on October 28 in New York by Sotheby's in cooperation with RM Sotheby's, lot 38. Please watch the video shared by Sotheby's.

The image is shared by Wikimedia. The licensing tag was added to this file as part of the GFDL licensing update. 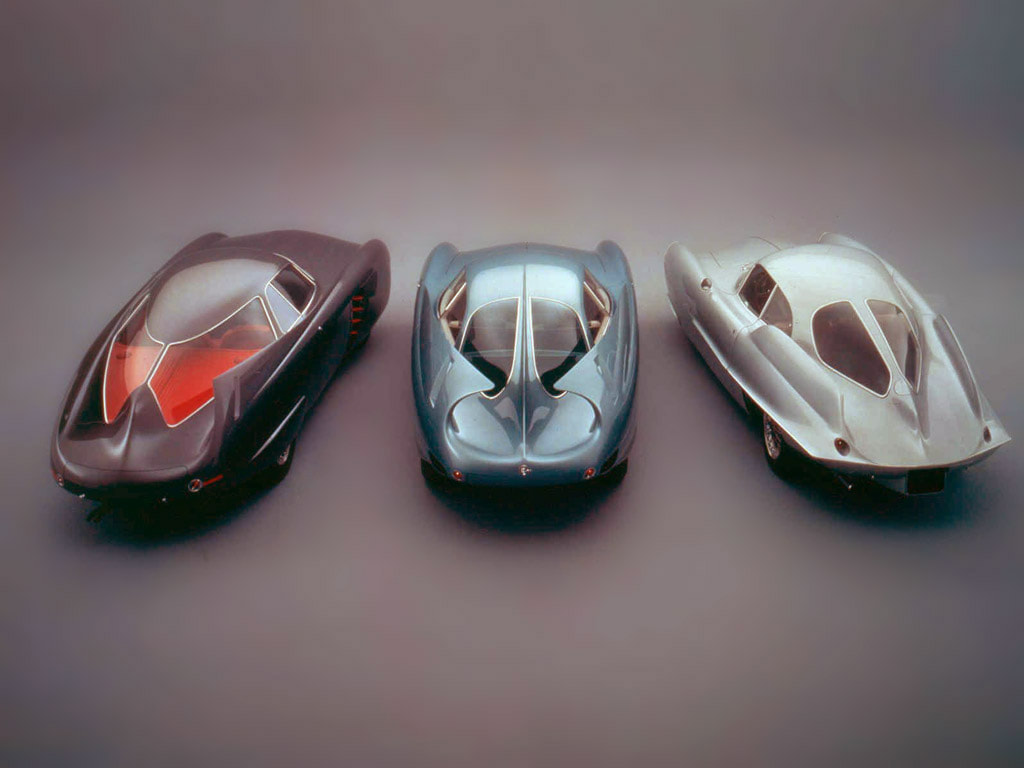 In June 1950 in Le Mans, Jaguar executives are delighted. They had allocated some cars to private pilots and one of them showed a good behavior of his XK120 before dropping at the 21th hour for a braking issue. Jaguar is then resolutely committed to the technological challenge of competition and launches the study of the XK120C soon known as the C-Type.

In 1951, success is achieved for the first official attempt by Jaguar at Le Mans : a C-Type wins the race. In the following year, the failure is scathing. To counter Mercedes-Benz, Jaguar had modified the aerodynamics without appreciating that it would cause an excessive overheating.

The option taken for 1953 is innovative, with a lightweight body made of aluminum and some equipment improvements. The unique target of the brand is Le Mans, and only three cars are assembled. They will be the last three in the C-Type. Success returns : the new Jaguars brilliantly occupy the first, second and fourth final positions.

This variant of transition is the rarest Jaguar, made obsolete by the development of the D-Type.

Jaguar is not totally uninterested in the fate of its C-Type Works Lightweight since they managed to sell all the three cars to the Ecurie Ecosse after the 1953 season. The three cars are getting high successes throughout 1954 before being sold again.

The best overall record of these Lightweight comes to the car that had been fourth at Le Mans in 1953. It then will undergo major transformations including changing its coachwork. Its current owner has fitted a new body that scrupulously meets the 1953 configuration, excepted that it is metallic blue painted in the colors of Ecurie Ecosse.

The C-Type Lightweight is the rarest Jaguar. This newly restored unit is estimated $ 9M for sale by RM Sotheby's in Monterey on August 14, lot 235. I invite you to watch the video shared by Petrolicious.
British Cars
Jaguar
1954