Francis Bacon enjoyed confrontations. Having become famous, he despised the deference of his interlocutors. In 1974 in Soho, he was aggressed by the bartender John Edwards who criticized his selfishness after a missed visit to his London pub. John was right. Francis returns to his studio and begins to paint his first portrait of John Edwards.

John was handicapped by a severe dyslexia which had ruined his education. He could barely read and write but his behavior was direct and sociable. Francis will say of John that he was the only true friend he ever had. The age difference was 40 years. John will be the sole heir of Francis and keeper of his estate.

Such a trust was new to the old artist. John became his photographer. This strong boy could also be his bodyguard. On happy days, he had the privilege of entering the workshop while Francis was painting. He was the only witness to the lifelong drama of the artist who constantly seemed to be fighting with his canvas.

Francis painted more than twenty portraits of John. Their friendship changed his style. No more caricatured faces and deliquescent bodies.

John is gently seated on a stool and normally dressed. He is recognizable by his prominent jaw which the artist reinforced with a white line in the two side views. The face is made expressive by his usual range of colors, from flesh to crimson. The sitter is enclosed in Bacon's signature threadlike cage which was a tribute to Giacometti. The large empty room with the concave wall is the arena in which the artist exhibits his model.

The originality of this artwork in Bacon's corpus is that the face is realistic, peaceful and confident. Francis stated that John's triptych is one of his most successful works. It certainly means that his empathy with the disabled model was complete.
Bacon
Later Bacons
Decade 1980-1989

Link to catalogue.
may also be included in 1983.

In March 1983 Larry Gagosian exhibited artworks by Jean-Michel Basquiat in his West Hollywood gallery. A few months later the artist tries the Californian adventure and installs his studio in Venice. He thus temporarily escapes New York where he felt the difficulty of transforming his skill into a lasting fame. Basquiat mingles little with the surrounding worldly life : he came to Los Angeles for working.

One night in the yard of his studio, Jean-Michel meets a tramp. The palisade was therefore useless. It would be more useful as a support for his paintings. He disassembles it and reuses the slats until that source is depleted. It is a simple and clever way to give his work an additional feature of street art. Later in New York he will purchase boards to continue this new practice while including tags therein.

On May 17, 2018, Phillips sold as lot 5 for $ 45M from a lower estimate of $ 20M Flexible, acrylic and oilstick 259 x 191 cm painted in Venice in 1984 on horizontally stacked wood. The low resolution image is shared by WikiArt "for fair use" under the copyright of Jean-Michel Basquiat.

The larger-than-life African-American character with transparent skin is an alter ego of Jean-Michel. The left forearm is disproportionately lengthened to reach the right hand, forming a flexible frame above the head. The very straight head is proud, expressing the desire for glory of the artist.

Flexible is the masterpiece of this transition phase. A photograph of 1986 shows the artist sitting on a decorated cube with the towering Flexible on the back wall of the workshop. This painting had been preserved in his estate by his sisters. 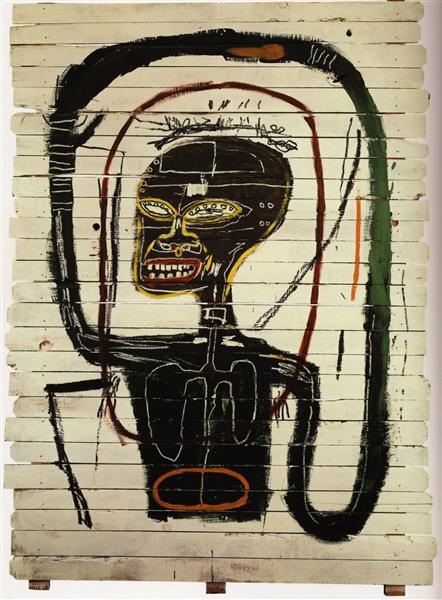 This work has all the qualities of execution of the masterpieces of 1981 and 1982. Made in acrylic, silkscreen ink and oil stick on canvas, it is a blazing mingling of red, yellow, purple and green all around and inside the central character. Yet Pyro is dated 1984.

1984 is the first difficult year for Basquiat. At the beginning of the year, he is in Los Angeles for his brief second stay under the patronage of Gagosian. He escapes for trying to set up his studio in an isolated ranch in Hawaii and returns to New York City in March. At the end of the year his friends are worried about his growing dependence on drugs.

Basquiat always seeks to understand and express his exacerbated relationship to the world. The title Pyro must be correlated with the fury of the central character who does not control his own explosion.

Pyro includes symbols of New York City like the Empire State Building in a choice position at the top right of the image. The pagoda tower is a symbol of the cosmopolitan diversity of the big city. The hopes and threats of technology include the space shuttle and graffiti evoking the polonium industry.

The work is dated but not located. Considering its exhibition history which begins in the following year, it was probably not made before Jean-Michel came back to New York.

From 1967 to 1985, the series of paintings titled Ocean Park is the interpretation by Richard Diebenkorn of the atmosphere and colors of Santa Monica. Seeking the dazzling light as de Staël had done, he goes further by sublimating the landscape in abstract compositions.

During these two decades the emotions of the artist were changing. He interrupts Ocean Park in 1980 after opus 125. He feels the need for a greater realization of his vision on large canvases and composes opus 126 to 140 in 1984 and 1985.

Most of the paintings of this ultimate Ocean Park series leave a significant place to the colors of the shore. The starting opus of the new style, # 126, is an abstract landscape in many colors with a structured geometry. It was sold on May 17, 2018 by Christie's for $ 24M from a lower estimate of $ 16M, lot 26 B.

This oil on canvas 236 x 206 cm painted in 1984 displays the shimmering sun-filled colors of a Californian mid-day without shadows. Although the lowest stripe reflects the saturated blue of the sea, it is not a landscape. The two pairs of oblique lines have different vanishing points. A subtle reference to a reality is however provided by a small transparent triangle filled by the blue sky and small white clouds near the top of the image. The sun is a very elongated rectangle close to the upper edge.
Los Angeles

Chu Teh-Chun arrived in Paris in 1955. Far from denying his origin, he wanted to draw inspiration from Western painting to modernize the Chinese art. He decided to use abstract art.

The Cultural Revolution had broken the ties between China and its diaspora. Liberalization terminates Chu's cultural isolation : he meets in Paris his former professor Lin Fengmian in 1979 and his old friend Wu Guanzhong in 1982. In 1983 Chu Teh-Chun and Zao Wou-Ki make separately a trip to China. Zao meets Zhang Daqian.

On July 8, 2020, Sotheby's sold as lot 1014 for HK $ 114M a pentaptych 162 x 650 cm of oils on canvas by Chu Teh-Chun. It is dated 1983-1984, the period of reinvigoration of the Chinese culture of the artist. His most important works are the result of a development which can last several months, even several years. He does not have the creative impetuosity of Zao and enjoys working while listening to Beethoven's Hymn to Joy. Please watch the video shared by Sotheby's.

The title, Les Eléments confédérés, explains this division into five parts which is unique in the art of Chu. The five elements that constitute nature according to Chinese conception, wood, earth, water, metal and fire, are basically distinct, but there is nothing to attribute one of them to a specific panel. They create an undifferentiated harmony together, like yin and yang in a diptych. Green and blue, traditional colors of landscapes in Chinese art, are dominant.

One of the five elements is facetious : water, which can turn into falling snow and whiten the landscapes. In December 1985 the train in which Chu crosses the Swiss Alps is caught in a snowstorm. The artist will translate into his art this additional complexity of the world, which is not limited to a mere confrontation of the five elements. Vertige neigeux, diptych 2 x 4 m dated 1990-1999, was sold for HK $ 92M by Christie's on November 26, 2016, lot 2508..

A world class wonder is found by a girl in the early 1980s in the rubble of a former mine near a family home in Zaire. This 178 g amber colored piece of rick is a rough diamond of 890 carats. Exhibited in 1984 at the Smithsonian, it is in period the fourth largest rough diamond ever found, far below the Cullinan and just below the Excelsior and the Star of Sierra Leone.

Its shape was irregular with one striped face and one hollow face. Its cutting required four years of difficult work. The wonderful gem had a near perfect clarity in a variety of colors. The biggest finished diamond named The Incomparable was an internally flawless fancy deep brownish yellow shield shaped weighing 407.48 carats.

It is renamed the Golden Canary. The GIA acknowledges it in 2022 as the largest Flawless or Internally flawless, and largest pear shaped diamong graded by them. It was sold for $ 12.4M by Sotheby's on December 7, 2022, lot 75.

A large, glittering yellow diamond, known as ‘Golden Canary’ and valued at about $15 million, was unveiled at Sotheby’s in Dubai pic.twitter.com/0kohTNJm4L

​Brice Marden started as a minimalist. Also inspired by Jasper Johns, he made paintings in oil and wax composed of colored stripes of equal size strictly juxtaposed. He abandoned the fragile wax in 1981 by developing a mixing of terpineol with oil enabling a flat drying without reflective luminescence.

His series of Post and Lintel provides a highly stylized figure of a typical antique Greek temple in Hydra in the Aegean islands where the artist also built his studio. The lower register provides the columns, below the rows of the lintel.

Number Two displays a set of twelve elements in three panels of four. Each segment has a monochrome T shape made of one in the row and one in the column, with its complementary color filling each lower side column for dual red and green, purple and yellow, and blue and orange.

This oil on canvas 214 x 276 cm dated 1983-1984 was sold for $ 11M by Sotheby's on November 14, 2019, lot 9. It was executed in 1983-1984 beside three similarly constructed paintings conceived to offer a spiritual link between antique and current civilizations. The use of six colors refer to the six days of the Judeo-Christian creation and to the six elements of Buddhist universe.

Each monochrome hue is built up from a high number of paint layers in a brush and scrap process. The imperfections provide a gestural impression comparable to the disturbed lines in the abstractions of Agnes Martin or to the fringed edges of Rothko's rectangles. Each monochrome is a re-mix, in the opposite to Ellsworth Kelly's pure colors.

After the 1982 candles (Kerzen), Gerhard Richter explores the extreme limits between abstraction and figuration. The titles refer to the form of an object that introduces a three dimensional effect which may be compared with Kline's beams.

The series 553 painted in 1984 in oil on canvas 225 x 200 cm has three opus titled Vase, Besen (broom) and Aufzug (elevator) in a variety of bright colors. Abstraction is already dominating : there is no correlation between the three titles.

Going into pure abstraction in the 1980s, Willem de Kooning felt that he had reached his top maturity. The independent artist was now happy to understand the expressivity of the pure colors in the follow of Matisse, Cézanne and Monet.

His new style is made of intermingling colored curves in a spaced composition over a white or light background. The curves may be underlined.

On May 16, 2022, Sotheby's sold at lot 16 for $ 9M from a lower estimate of $ 7M the Untitled XIII of 1984, oil on canvas 178 x 203 cm.  The crimson cascading lines, sometimes underlined in a paler crimson, and smaller blue lines are enclosing or not some large pale yellow areas on a white background.