Picasso is married to Olga and madly in love with Marie-Thérèse. The two lovers do not live together but maintain their passion in daily letters with inflamed phrases. Marie-Thérèse will continue to write to Pablo for many years, even when the artist had left with new muses.

On June 27, 2017, Christie's sold for £ 35M from a lower estimate of £ 25M Femme écrivant, oil on canvas 81 x 65 cm painted on March 26, 1934 at their nest of love in Boisgeloup, lot 8.
​
Painted with joyful colors, Femme écrivant is one of the most emotional portraits of Marie-Thérèse. Beyond the beauty of her face and body that triggered the eroticism of the 1932 paintings, beyond also the contemplation of a sweet and sleepy woman who made herself gently admired, this painting expresses the authenticity of their relationship.

Turning her back to the window, Marie-Thérèse is focusing on her writing. Pablo knows that at this moment she thinks only of him. Her unstructured head becomes transparent before the blue of the sky. The eyes have the romantic shape of moon crescents.

Pablo is in full creativity. From the next day 27 of March he begins La Lecture which will be a series of six paintings demonstrating the variety of his styles. Breaking the secret intimacy of the Femme écrivant, Marie-Thérèse is accompanied by another woman.

Picasso knew that Femme écrivant was one of his masterpieces among the many portraits of Marie-Thérèse : he kept it until 1961. Please watch the video shared by Christie's in which the artwork is discussed with sensitivity by Diana Widmaier-Picasso, the granddaughter of Pablo and Marie-Thèrèse, as blond haired as her grandmother.
Picasso later 1930s

Picasso made in 1934 a series of six paintings portraying Marie-Thérèse and a woman looking together at a book or a letter in an atmosphere of mutual trust.

It is close to a child's drawing but with flat areas of color that compete with Léger and Matisse. One of the women, with a blue sky skin, is Marie-Thérèse. Or so we are told : the unstructured face is not really recognizable.

Who is the woman? The subtitle of the sixth painting, Marie-Thérèse et sa soeur lisant, provides a key that does not close the issue because Marie-Thérèse had two sisters!

What then does the artist wish to tell with this intimacy that does not relate to him, if not expressing his desire to create a new family ? In the following year, Pablo left Olga and Marie-Thérèse gave him Maya. In the same period, he began to identify himself with the Minotaur. Times change, and also his artistic themes.

The styles of the Deux Personnages series are a review of the art of Picasso in an increasing complexity.

The juvenile portrait of the reader does not require Cubism to express her studious involvement. The other woman, shared between the desires to help and to let go, is Cubist. The strong parts of the image are enhanced by a working of color with the knife.

The sixth painting, on April 10, 1934 offers the latest style of the artist with a priority to the attitude. All realism was replaced by a bizarre symbolism.

Tête de femme endormie displays the head of the snoozing woman reclining on sand. The filtered sun light is an excuse for a radiant geometric figure that echoes the lines of the beach tent. A breast is nude. A necklace of round gems adds to the balance of the composition. The palette includes a variety of bright colors : yellow, violet, blue and soft rose for the flesh ahead of the red and yellow of the tent and the pattern of deep red lines of the sea.

The house is for Hopper the theme that ensures the continuity of civilization. It symbolizes the past by surviving after the move or death of its residents. The 1929 crisis could only exacerbate his reluctant vision of the modern world.

Hopper is the most famous car user in the history of art. He tirelessly revisits the same places to perform sketches which he then reworks in his workshop in the form of large oil paintings.

Painted in 1934, East Wind over Weehawken, 86 x 128 cm, shows houses viewed from a small crossing of streets in suburban New Jersey. This place should support life but the streets are empty. These houses are promoted to the rank of major characters in the drama and wait for who knows what.

In the foreground, a tall unsightly city lamp divides the picture as if it were the keeper of nothingness. Seeking other marks, we see a sign at the limit of readability announcing For Sale. The moment before or after can reveal life. Two very small spots on far left edge are characters. Or not. Mankind does not matter. 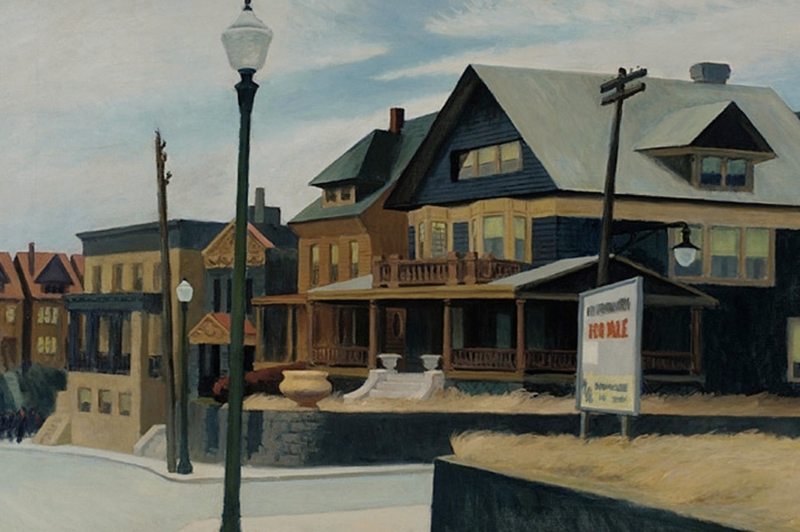 The era when Bugatti was invincible in the Grand Prix is ​​over. Faced with the Alfa Romeo Tipo B supported by the Italian government, the Types 51 and 54 are not competitive. To stop this decline, Bugatti develops the Type 59. Six cars are built in 1934.

The 59 only wins two Grand Prix : at Spa because the Alfa Romeos had a crash and, more deservingly, in Algeria. The traceability of the Grand Prix Bugattis is based on the engines and not on the chassis, and it is impossible to discriminate between the individual cars their participations in the competitions.

These discouraging results could have been anticipated : the 59 is too heavy, too rigid, not powerful enough, with an outdated gearbox and poor brakes. It will not be replaced : following the success of his high-end sports car, the Type 55, Jean Bugatti gives priority to the roadsters.

In 1935 four 59 were sold to English customers. The car with the No. 5 engine undergoes a long series of modifications at the factory. Accustomed to its presence in their premises, the mechanics affectionately nicknamed it Grand-Mère.

Grand-Mère is now a Bugatti 59 Sports, bodyworked as a two-seaters for competitions on French roads where the Alfa Romeos do not come. Driven by Wimille, it achieves many successes in 1937. Significantly, its new chassis had been numbered like a 57, ultimately erasing the page of the 59s.

A great lover of luxury cars and an outstanding patron of the brand, Léopold III of Belgium acquires this one-off 59 Sports in 1938. Rediscovered in the former royal garage in 1967, it remains authentic in the configuration of its delivery by Bugatti to the king.

Grand-Mère was sold for £ 9.5M by Gooding on September 5, 2020, lot 4. Please watch the video shared by the auction house. Its image at Goodwood in 2012 is shared by Wikimedia with attribution : David Merrett from Daventry, England [CC BY]. 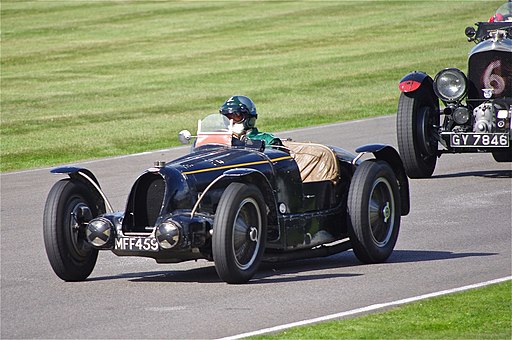 On December 18, 2017, Aguttes sold for € 8.8M from a lower estimate of € 3M a recently rediscovered still life painted by Sanyu showing a peony plant in a flower pot, lot 12.  Please watch the video shared by the auction house.

After the termination of his co-operation with Roché in 1931, Sanyu stops dating his artworks, perhaps because he shall give more attention to his creativity than to trade. The chronology of his art is uneasy to analyze.

This pot of peonies is made in minimalist colors consistent with the Roché period : the black and grays of the calligraphic line and the pink of the nudes. The staging of this plant with sharp lines is both effective and strange, like a colored negative succeeding his previous positive compositions on a light background. Leaves lined and ribbed with white are transparent in front of the black background like the skeletal leaves of a memento mori.

Two other elements converge to date this still life on the early 1930s although a slightly later date is also possible.

The oil 92 x 74 cm is painted on canvas. After the war Sanyu will prefer to work on masonite panels. It is visible in the undated photo of an exhibition wall, possibly from events organized in Amsterdam in 1933 and 1934 by a group of friends of the artist around the musician Johan Franco.

At the end of 1933 the Spanish Republican government lost the legislative elections, won by a coalition of small right-wing parties. In the same year Hitler came to power legally in Germany. Against the threat of a fascist dictatorship in Spain, the left and the unions are preparing the revolution.

Miro will later observe that at that time the discomfort created by social events was more physical than conscious. The antidote for the artist is the use of colors.

Indeed his style and technique changed in 1934. He worked more with gouache or pastel on paper, to better highlight the brightest colors than on canvas. He put aside his ethereal poetic vision to recreate a surrealist universe adapted to the anguish of social tensions. Used for pastels, velours paper also brings a tactile effect.

Miro liked to express his art in series, such as the 18 Peintures made from collages in the previous year. At the end of the summer 1934 he designs a series of 15 pastels on velours paper of large size, which he will date October 1934. These pastels display deformed humans in childish style in front of glaucous backgrounds. The arms are often atrophied to mark the unconscious impotence of the angry people in the face of the social crisis.

On November 12, 2018, Sotheby's sold for $ 7.3M Figure, pastel 108 x 73 cm, lot 33. Please watch the video shared by the auction house, in which this series is rightly discussed as a premonition of the Spanish Civil War.

Lyonel Feininger, engaged in the major artistic movements of his time, spent many years in Germany. In this country he painted Der Rote Geiger (The Red Fiddler), oil on canvas 100 x 81 cm, sold for $ 7.3M from a lower estimate of $ 5M by Sotheby's on May 5, 2010.

He had been a caricaturist before being an artist. His giant violinist, whose realistic profile fits the cubist buildings of the city to dominate them, might seem like a trick of illustrator, but there is one annoying detail: the smile of the musician is too ecstatic.

Here's why. This work was painted in 1934, the year when political power is persecuting the  "degenerate" artists related to the Bauhaus, where Feininger was a professor. The artist, also a violinist, tries to persuade himself that music can still help the threatened peace. This cheerful art is hiding a nightmare.
1935