A footstool 40 cm high made ca 1750 in Philadelphia was sold by Sotheby's on September 26, 2008 for $ 5.2M from a lower estimate of $ 200K, lot 117. Made in walnut, it displays a dark rich possibly original surface and has been reupholstered in a period correct fabric.

It has all the Queen Anne features including the paneled foot pads. The serpentine shape of the seat rail is unique of its kind in colonial and world furniture.
Colonial Furniture

1765 The Dundas Suite by Chippendale

Lawrence Dundas made a fortune in the logistics of the British army in Flanders during the Seven Years' War. He was named a Baronet in 1762 without waiting for the end of the war and was nicknamed the Nabob of the North, no doubt by reference to his Scottish origin.

The new baronet buys and arranges several sumptuous residences, thus giving work to all the best British architects and cabinetmakers of his time. He does not refuse any style as long as it is luxurious and he highly appreciates the Palladian architecture and the decorative art of the Gobelins.

Dundas acquires in London a mansion very strategically located in Arlington Street in the business district. To enlarge this house to his taste he calls on the architect Robert Adam who was a great connoisseur of ancient architecture after a long stay in Rome. To ensure the most perfect harmony between architecture and furnishing, he commissions Adam to design the furniture.

The drawings of the sofas and armchairs were made by Adam for Dundas in July 1764. They have been preserved. The manufacture of these seats and of several other pieces of furniture is ordered to Thomas Chippendale. The designs of the Adam seats are similar to a figure prepared in 1759 by Chippendale and included in the third issue of his Director in 1762.

Chippendale's suite of seats made in 1765 for Arlington Street's great room is composed of two pairs of sofas and eight armchairs sculpted in an abundant style inspired by reliefs of Roman sarcophagi including sphinges and griffins.

The two pairs of sofas have a different width. An example 252 cm wide was sold for £ 2.17M by Christie's on June 18, 2008, lot 5. It had retained traces of its original gilding. It is illustrated in the tweet below.

The pair of shorter 218 cm sofas was dissociated in 1997. These two pieces listed as separate lots passed at Christie's on July 5, 2018.

As a #furniture maker who understood the important relationship between #design, function, #craftsmanship and beauty, it’s no surprise #Chippendale is one of #Britain's most cherished #designers:

Bergères and marquises are the comfortable chairs of the Louis XV style. A fauteuil is a chair with armrests. A bergère is a fauteuil with full armrests. It has a low seat and an additional cushion. A marquise is a larger bergère that could in theory accommodate two persons. Royal seats are exquisitely carved in rococo style and gilded. In a later phase the decoration was made of garlands of flowers in a repetitive rhythm.

Four legitimate daughters of the late king survived him. The château de Bellevue in Meudon was then transferred to three of them as a private residence. They had redesigned the interior and created a jardin anglais in the style of Chantilly and Trianon.

For the use of their Salon d'Eté, Mesdames commissioned in 1784 a sumptuous set of eight marquises and a canapé for an extravagant price which was paid by their nephew King Louis XVI. The marquises were referred in period as fauteuils en tête à tête.

The detailed bill survives in the royal archives. The furniture was ordered to Blanchard who subcontracted the menuiserie to Jean-Baptiste II Tilliard. The carving was made by Rascalon, the gilding by Dutemp and the silk upholstery and cushions was supplied by Nau. The execution was supervised by the Garde Meubles Royal and the whole was delivered to Mesdames in 1785. They are stamped by Tilliard.

The canapé survives dressed in a Gobelins tapestry at the Gulbenkian Foundation in Lisbon. A pair of marquises 107 cm high, 104 cm wide and 90 cm deep was sold for € 3.7M from a lower estimate of € 800K by Sotheby's on October 11, 2022, lot 53 in the auction of the furnishings of the Hôtel Lambert.

#AuctionUpdate An extraordinary discovery and ranking among the most important examples of Louis XVI seat furniture to have survived, a pair of royal giltwood marquises by Jean-Baptiste II Tilliard (c. 1784) sold for €3,665,000 (est. €800,000-1,200,000). #HôtelLambert pic.twitter.com/nmCHbmXINW

The estate sale of the collection of the fashion designer Yves Saint-Laurent was jointly organized by Christie's and Pierre Bergé et Associés from 23 to 25 February, 2009. The furniture of the 20th century was led by an armchair made by Eileen Gray around 1920-1922, sold for € 22M from an estimate of € 2.5M. The low resolution image below is shared by Wikimedia for fair use.

This seat is only 61 cm high. The sitting height is normal, but the back is small. It is large (91 cm), making it a comfortable chair. It is named the Fauteuil aux Dragons for the sculptures of its armrests.

On June 1, 2005, Camard had separated a suite of six armchairs à la Sirène. They had belonged from 1923 to Damia, the music hall singer woman with whom Eileen had a love affair. From a very different model from the fauteuil aux dragons, their sculpture of the women fish was enhanced by an open back. The highest result was € 1.75M. 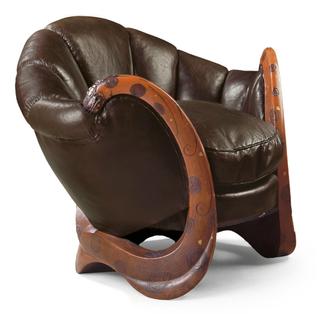 The Exposition des Arts décoratifs in Paris in 1925 opens new paths for luxury. The creators amend traditional furniture with new forms, search the world for the most splendid materials and desire to confront the legendary wealth of India.

In the following year, one of the richest Hindu rulers, the Maharaja of Indore, resigns after a scandal. His son and successor, aged 18, is assisted by a regency council. While waiting to exercise his responsibilities, he travels Europe. His name is His Highness Maharajadhira Raj Rajeshwar Sawai Shri Yeshwantra II Holkar XIV Bahadur.

The young man is passionate about modernism and wants to furnish an avant-garde residence of which he entrusts the design to Eckart Muthesius. All the Parisian designers expect to be his suppliers.

At the Salon des Artistes Décorateurs in 1929, Ruhlmann exhibits an important suite of furniture under the title of Studio-Chambre du Prince Héritier d'un Vice-roi des Indes, which leaves no doubt about the identity of the targeted client. His innovations are the use of black lacquer and chrome-plated bronze, and the replacement of the base of several pieces of furniture by curved end metal bars similar to a pair of skis.

The Maharaja visits the exhibition but his advisers, Roché and Muthesius, do not rush. Among the Ruhlmann furniture in this Salon, he orders only a copy of the desk with its armchair and some bookshelves. This partial disavowal is to the delight of the president of the Artistes Décorateurs, Prime Minister André Tardieu, who buys several original pieces. The Bureau Tardieu accompanied by its armchair was sold for € 2.3M by Christie's on March 29, 2011.

This furniture has been the subject of ingenious designs in terms of functionality. The chaise longue aux skis offers four possible backrest inclinations and an electric heating of the footrest. The lounge chair of the Studio-Chambre is the only complete copy of this model, so being one of Ruhlmann's rarest productions. The only other known example, incomplete, is not localized.

We are honored to announce ‘Modern Masters: Chefs-D’œuvre D’une Collection Privée‘, an auction this December in #NYC that will present a superlative collection of art and design by top European masters. Learn more about two exceptional highlights: https://t.co/Ek5nDdr37h pic.twitter.com/YuIV8zT4xe

from 1965 Moutons by LALANNE

An unusual idea can provide an overnight fame to an artist. In 1965, François-Xavier Lalanne creates a sensation in Paris at the Salon de la Jeune Peinture.

He designed a small bench in wood and aluminum, covered with wool, with four feet. All furniture manufacturers run their models in multiple copies: Lalanne standardizes the quantity to 24. Thus was born his flock of life size sheep, worthy of the best ideas of surrealism but in an extreme simplicity of interpretation.

The set is funny. The sheep with a proudly raised head is a bench with a hat holder and the headless sheep is an ottoman. This is a clear invitation to leave the pieces together : headless animals are considered occupied to graze within the group, protected by the external figures.

His first flock of 24 sheep is entitled Pour Polyphème. The artist's goal was to exhibit an innovative, utilitarian, monumental and modifiable work.

A complete herd of seven white sheep, one black sheep and sixteen ottomans was sold for $ 5.7M from a lower estimate of $ 4M by Christie's on November 14, 2012, lot 43. This set had been purchased in 1976 by an American couple to fill a barn.

The success of the Moutons de Laine gives rise to new variants : the ram, the ewe, the lamb. The Mouton de Pierre appears in 1979 for use in the garden. It is in epoxy concrete and bronze, without wheels and without wool. It is first edited in 250 numbered units, later in small series of replicas.

The lounges by Marc Newson are an important milestone in contemporary creation. Just out from his sculpture training, he executed in 1986 his first prototype named LC in homage to Le Corbusier.

Australians love surfing. Newson appreciates that the manufacturing techniques of the surfboards may be used for more complex and modern structures. The shape is achieved by covering the foam with fiberglass. Then comes the finish.

The sculptor Newson wishes a metallic finish. After various tests in his garden in Sydney, he manages to keep the convex and concave curves of the cast by hammering sheets of aluminum joined by many blind rivets. The texture is similar to an aircraft fuselage. The new model in 1988 is named Lockheed lounge without the involvement of that industrial company.

The Lockheed Lounge is abstract art applied to furniture, with unprecedented materials and techniques. In 1990, ten units plus four artist's proofs are edited, bringing their figure to a final fifteen.

We do not sit on a Lockheed lounge but may recline on it for a social activity. The new Madame Récamier is the entertainer Madonna. A Lockheed Lounge appears sporadically in 1993 in the video Rain, a song from her highly successful Erotica album. Newson's chair becomes an icon of contemporary lifestyle.