The portraiture by Lucian Freud is unprecedented and one of a kind. He manages to offer to the viewer an intimacy with the sitter, including with himself. A male or female nudity gets rid of man-made artifacts, providing another entry into the soul.

In the portrait heads of their friends, Freud and Bacon had an opposite approach. Bacon relied on photos without the physical presence of his model. Freud caught the model in interminable sessions in his studio during several months. He had to overcome his or her impatience by his chat, made of wit and gossip. He is a Western Scheherazade. Famously, by temperament, Bacon could not play that game. His portrait by Freud in 1957 was left unfinished.

Freud could indeed not use photos. He was peering through repeated close up inspections all the dissymmetries, stains and defects of the skin, on the face and on the nude body. He added layer over layer without erasing up to a deep impasto, creating a sort of paint sculpture on the canvas.

Viewed in photo without that tridimensional effect, the face lines are harsh. In a 2002 picture, Kate Moss does not look like a 28 year old supermodel. A figure by Freud is impersonating without being realistic. This Naked Portrait in pregnancy was sold for £ 3.9M by Christie's on February 9, 2005, lot 28.

Also in 2002, Freud added David Hockney to his sequence of head portraits of friends. At nearly 80, Freud was at the culmination of his signature style. Hockney was 65. His gaze is penetrating and he his ready to add his contribution to the talking. The spectacles were necessary but not so important : Freud added them at the last session. As an artist, Hockney later made clever comment about that experience and on the artistic practice of Lucian Freud.

Damien Hirst has built his career on the psychological impossibility of death, which is nevertheless a real and inevitable fact. By 1992, only one year after his first immersions of animals in formaldehyde, he worships pharmacy considered as a beneficial link between life and death.

The twentieth century had experienced the development of abstract art. The basic symbol of his pharmacy is the pill whose geometry and color may vary on artist's discretion without imposing a realistic structure. It is estimated that the artist created about 23 pill cabinet between 1999 and 2010.

In the following of impressionism and expressionism, Hirst appropriates the seasons for a symbolist variation in the colors of his pills. This phase of creativity culminates with four models of pharmaceutical cabinets made in 2002 in stainless steel and glass. Each of these installations, 183 x 274 x 10 cm, displays several thousand of pills painted in various colors with a visual effect doubled by a back mirror wall.

Robert Ryman is the artist of white on white. Feeling of himself as a non narrative experimenter, he offers a variety of brush strokes on monumental canvases. A thick impasto creates surface asperities and generates brightness variations under the light.  He perceives his art as unlimited.

His quest for the absolute purity of the white is enhanced by the use of staggering square or near square canvases.

The leading thread of Wayne Thiebaud's pictures is an association between forms and colors. He is not interested in realism. The cakes are one of his preferred themes because manufactured artifacts have no standardized shape.

He also used these concepts in cityscapes and landscapes. His series of large scale bird's eye views of rivers, begun in the mid 1990s, are directly inspired by the meanders of his beloved Sacramento River Delta, splitting the countryside in a variety of agricultural textures. The emotional effect of his colors reminds Diebenkorn's Californian abstractions.

Its flexible forms separating a variety of textures remind the abstract paintings of sinuous lines in de Kooning's last period. Phillips offers also a convincing comparison with the winding road of Nichols Canyon painted by Hockney in 1980.

From the same series, Delta Water, acrylic on canvas 122 x 183 cm painted in 2003, was sold for $ 3M by Christie's on November 8, 2011, lot 78. The water channels take the daring shape of an octopus, with smaller rivers falling into a sharp meander.

For 2002 Ferrari prepares the F2002. Inspired by the F2001, it is largely modified with a lighter body, a new specification of the V-10 3 liter engine and significant improvements in the gearbox, aerodynamics, cooling, balance of weights.

The development of the F2002 is a bit late. Schumacher drives an F2001 in the first two grand prix, winning one of them. For the fifteen grand prix of the rest of the season, he uses the F2002 with which he records ten victories. The same model brings four wins to his teammate Rubens Barrichello. The only failure of the F2002 in this phase is the Grand Prix of Monaco where Schumacher is 2nd behind a McLaren-Mercedes.

On November 30, 2019 in Abu Dhabi, RM Sotheby's sold for $ 6.6M an F2002, lot 117. This car won the 2002 Grand Prix of San Marino, Austria and France. The victory at Magny-Cours secures Schumacher's World championship title with six races still remaining. Such dominance of a car model and a champion is unique in the history of Formula 1.

Please watch the video shared by the auction house. The image is shared by Wikimedia with attribution:  I, SilverArrows [CC BY-SA 3.0], via Wikimedia Commons

In the following year this model is already out of date. Schumacher still wins with a F2002 the fourth grand prix of that season which he will continue with the F2003-GA. 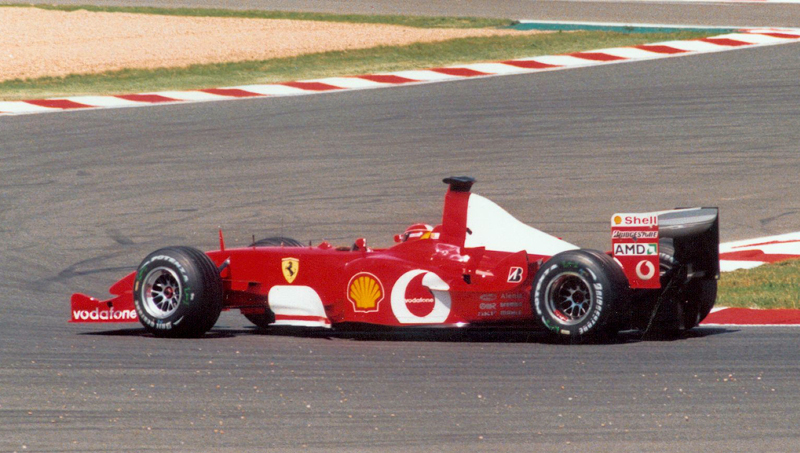 The Marlboro Man by Richard Prince was a mockery of the virility. From 2000, many years after the termination of the tobacco advertisement campaign, the availability of the digital techniques enables large size photos of the cowboy.

In 2002 the series of Nurses brings a female companion, now selected by the artist by re-appropriating jackets from dime-store medical thrillers. The technique is changed to inkjet print finished in acrylic on canvas. They display the basic elements of modern pictorial success : large size, sex, death and often wealth. Their hospital mask must appeal the people from the 2020-2021 health alert.

Most of these earliest Nurses are gently appealing from behind their mask.

Nevertheless Prince's women are criminals, not victims. If there were some remaining doubt about the morality of these girls, it is cleared by a sex appealing Intimate Nurse made in 2004, sold for $ 910K by Christie's on November 8, 2005, lot 11.

Some of the early Nurses bear along the folds of their uniforms unexplained drippings from the various acrylic colors used by the artist.