Except otherwise stated, all results include the premium.
​See also : Turner
Chronology : 1840-1849

Based on a sketch made in 1802 during his first visit in Switzerland and executed ca 1804-1806, it features the Lake of Thun below a dramatic stormy sky.

The English Romantic #artist passed away #onthisday in 1851.

From his beginning Turner had understood that watercolor could bring beautiful effects comparable to oil, and even better for sunrises and sunsets. He will be the greatest experimenter of this technique throughout his life.

He had predecessors and friends. A stopper varnish to limit the expansion of a color was used before him. Girtin obtains atmosphere and light by his washes on large surfaces. Cozens adapts oil techniques to watercolor for his romantic chiaroscuro.

Turner's great contribution to the art of watercolor is his almost systematic use of wet in wet from around 1815. The color diluted on a wet paper allows to easily prepare the background of the image, offering by simple movements of paper and brush the gradual hues that will make the beauty of the final artwork. After drying, it will of course remain to draw and color the figures that animate the scene. This technique enables to make very large watercolors.

On the other hand, his ambition to reconcile his extreme subtlety of contrasts with the techniques of printing has certainly disconcerted his most benevolent editors.

This view of Margate at sunrise displays a strong animation of fishermen in the taste of the previous English scenes of the artist. It was conceived as part of a series of Marine Views that was not published following a disagreement between Turner and his editor. A mezzotint engraving of this specific image of Margate was however printed in 1825.

Like so many other artists, Turner was dazzled by the one of a kind atmosphere of Venice mingling sun and mist. He developed a new pictorial style for highlighting it. He executed about 150 watercolors during and after his last visit in that city in 1840.

This view displays the white splendor of the Dogana and San Giorgio Maggiore with a storm approaching. The thick mist nearly cancels the tall ships on the basin.

A watercolor 24 x 30 cm displaying the Dogana under the New Moon was sold for £ 960K by Christie's on July 10, 2014, lot 209. The view had been taken by Turner from the steps of his hotel. Its drawing is based on a picture from an earlier visit. The new moon is a reference to a canto about Venice by Byron.

Such an ethereal rendition served as a model for oils on canvas including the Giudecca painted in 1841, sold by Christie's in 2016, and a Dogana closer from that original in 1842.

Turner is the finest illustrator of the European landscapes. In 1840, the engraver Thomas Prior commissions him for a view of Heidelberg. The small town on the Neckar is one of the most enchanting sites, with its bridge, its church, and the ruins of its palace on the hillside.

At 65, Turner is at the top of his art. He expresses in his watercolors the exceptional light and iridescence from poor weather conditions. The landscape is always identifiable and improved with small characters engaged in their daily tasks.

To respond to the order, he sketches Heidelberg when the rain has stopped and the rainbow is just beginning to rise. This large watercolor, 35 x 53 cm, was probably made ​​in 1841. It will be published in 1846 by Prior.

The artwork presents a curiosity that is not a fantasy. Several characters are in medieval costume. Turner remains a witness of his time : in Heidelberg, university students used to dress in that way.

Turner travels a lot, sketching the figures of the landscapes in his notebooks. He wishes to express the sublime while respecting sufficiently the topographic balance so that the location is immediately recognizable. He adds the atmosphere by the colors of the extreme hours of the day highlighted by the lightness and spontaneity of the watercolor.

He is a great innovator of color pictures. He succeeds in applying to oil painting the technique of overlapping wet colors that he had previously developed for watercolor. On his return from his 1840 trip to Venice, he achieves in both techniques the hues halfway between mist and dream for which he is rightly regarded as a precursor of impressionism.

The mountains appeal this idealist by their paradox between the aesthetic beauty of a calm day and the unstoppable power of its storms. From 1841 to 1844 he travels Switzerland in four successive trips. Murray's travel handbook does not leave his pocket : the legends created by the interaction between men and mountains nourish the creativity of the artist.

During the first of these four trips, Turner radically changed his business strategy. Previously he aimed at editing his images by printers. He now considers that watercolor can become a high quality product, providing the customer with an illusion of presence that exceeds that of oil painting. The large format allows him to add with his subtle touch and fine line the details that animate the scenery.

Back again in his workshop after his 1841 trip to Switzerland, Turner prepares fifteen 24 x 30 cm views of Lucerne and its surroundings for demonstrating the light effect to his clients, with the project of copying each sketch in a larger 30 x 45 cm as a single piece. This uniqueness enables him to raise the price of these "finished" watercolors to 80 guineas each, a very high figure at that time.

In the spring of 1842 his commercial agent Thomas Griffith organizes in London the sale of ten artworks of which only four were completed at that time. The other eleven sketches enabled to appreciate in advance the effect of the final work.

Three of the exhibited scenery show the Rigi beyond the Lake of Lucerne at different hours of the day. The mountain is dark before dawn, blue at sunrise and red at twilight. These pictures precede Monet's variations of light on the Poplars and on the Cathedral of Rouen by half a century, although Turner did not conceive them as a series.

Griffith selects four clients for this operation. Three of them are great collectors of modern art. The very young John Ruskin whose reputation as an art critic is already established is the fourth. He will later rightly recognize that this series of watercolors is the best of Turner in his entire career in that technique.

The most ancient collector does not accept the invitation. The most motivated is Munro of Novar who in 1836 had the rare honor of being accepted as Turner's traveling companion. He leaves with three finished watercolors and buys two of the future works. Ruskin also chooses two future works.

The other customer is the whaling tycoon Bicknell who had bought in 1841 the view of the Giudecca. He had a good taste : his oil on canvas was sold for $ 36M by Christie's in 2006.

In the sharing of the Swiss views, Bicknell takes the Blue Rigi, one of the four immediately available watercolors 30 x 45 cm.

​This picture of the mountain against the light at dawn is a masterpiece of pre-impressionist art with the clarity and luminosity of a watercolor on paper. Warm and varied colors cancel the drawing, in the admirable blur of a sunrise. In the foreground, sharp tiny characters observe the landscape from the shores of the Lake of Lucerne.
​
It was sold for £ 5.8M by Christie's on June 5, 2006, lot 53. This stunning drawing is now owned by Tate Britain. The image is shared by Wikimedia. 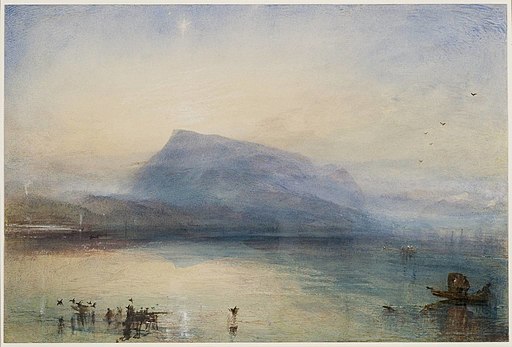 To have a pendant view to his Blue Rigi from the watercolors still to be achieved, Bicknell chooses a view of the Lake of Lucerne from Brunnen. He enjoyed the contrast between the quiet atmosphere of the lake and the brutal force of the rock.

#Rubens, #Turner, #VanDyck - our flagship #OldMaster sale on 4 July will offer masterpieces by some of the biggest names in art history. https://t.co/dQdCHbFIkb pic.twitter.com/Rv7rYxdYnX

Shortly after supplying the finished view of the Lake of Lucerne to Bicknell, Turner provides its preparatory watercolor to Griffith. The dealer will keep it in his collection. Indeed the sketches were not intended for trade and Turner will retain all the others that will be part of his legacy to Tate Britain.

For a long time, watercolors of Switzerland by Turner are considered as masterpieces, among the most perfect precursors of modern art. Take as an example the auction made by Christie's one hundred years ago, on 5 July 1912.

On that day, the Blue Rigi, 30 x 45 cm, was sold for 2700 guineas. A smaller watercolor, 23 x 33 cm, was sold at nearly the same price : 2500 guineas. Based on a sketch made in 1841, it shows Lausanne from the West. Colors explode within this remarkable landscape. Small farmers are busy with their daily work. The Grand Pont in the background had just been constructed.

After 1844 Turner suspends his mountain trips. He reuses his sketches around 1848 in flamboyant colors over a loose drawing that make him one of the best precursors of modern art.

It is painted in watercolor over dipped pencil with stopping out heightened with watercolor and with touches of gum arabic, The 38 x 56 cm wove paper is watermarked J. Whatman 1846.

The Wellhorn is snow covered in the distance. The cloudy sky is centered by a moon crescent which is also reflecting through the mist in the lake. While a natural lake, the water level of the Lungernsee had been lowered by 6 m by engineering in 1836. Cattle are walking on that new drainage.

Unknown in Turner's lifetime, this view had long been mistaken for an Italian lake. In 2001 an expert reconciled it with a couple of line drawings of the Lungern See in Turner's 1844 Lucerne to Thun sketchbook.