The lots below do not currently have a position in a thematic page.

The very young Marie-Thérèse Walter was a beauty. Picasso, who had met her by chance in a Paris street, was dazzled by her body and face.

Pablo was married and waited five years before turning into art his passion for Marie-Thérèse. The art market has already twice acknowledged these portraits made in 1932 as major works of modern art and masterpieces of eroticism.

The beautiful blonde was at once voluptuous and innocent, and Pablo loved to see her in her sleep. She is naked and lying asleep next to the image of her carved bust, in the painting sold for $ 106.5 million including premium at Christie's on May 4, 2010.

Lightly dressed, she dozes in an armchair in the painting titled Le Rêve (The Dream), 130 x 97 cm. Steve Wynn wanted it to become the world's most expensive artwork, but the transaction foreseen at $ 139M was set aside when he accidentally damaged the canvas in October 2006.

La Lecture (The Reading), oil on panel 65 x 51 cm painted on December 11, 1932, has a composition similar to the Dream. Marie-Thérèse, a little more undressed, forgets the book on her lap and sleeps chastely and candidly, her head turned upward. The same sinuous lines surround the head and body, getting a remarkable realism by a geometric drawing of great simplicity. The solid colors are close to a Matisse or a Léger.

On May 7 in New York, Sotheby's sells an enigmatic painting by Picasso, estimated $ 14M, lot 24 in the catalog. Titled Le Sauvetage, this oil on canvas 97 x 130 cm made ​​in November 1932 is the ultimate piece in a small series that Picasso explained. But must we ever believe what artists say, especially when they have the wit and humor of Pablo ?

The composition juxtaposes pleasure and tragedy, by staging a group of young women similar to the ideal image of Marie-Thérèse in all roles: player, swimmer, drowned, lifesaver, rescued. Without any man.

This work was born from the rivalry of Picasso with Matisse who was at the same time preparing for Barnes the huge mural triptych La Danse II. It is not a coincidence that the bodies of Matisse's dancers and of Picasso's bathers are similarly contorted.

Nudes painted by Matisse in La Danse II are decorative and stylized but not at all anecdotal. Picasso wants to stay at the forefront of artistic expression and adds a narrative and even philosophical effect by this opposition between life and death.

If we consider in Le Sauvetage the variety of occupations and the desire for drama, we may state that this bizarre painting is as an epic precursor to Guernica.

POST SALE COMMENT
Picasso fans loved the unusual style and the narrative theme of this painting, sold for $ 31.5 million including premium.

Edward Hopper is a director of the world around him. He is shy, laconic and conservative. His marriage to Jo, who is sociable, open and liberal, will last their lifetime. The notebooks scrupulously kept by Jo are often the only entry to understand Edward's creativity.

Jo becomes Edward's only model, which avoids jealousy, but he positions her against her own temperament. She lets go, and becomes the symbol of the loneliness felt by the artist. In 1942 in Nighthawks, Edward and Jo are the diners in the deserted restaurant. This famous painting is a great example of the atmosphere of a thriller in major art.

Edward carefully observes his surroundings : the hotels, restaurants and theaters of New York City, the road to Cape Cod and the gas stations. He takes sketches before making his paintings in his workshop. Often the realization, as in Nighthawks and Hotel Window, goes beyond his original intention in the gloomy.

Hotel Window, oil on canvas 102 x 140 cm, was painted in 1955. In the lobby of a hotel, a gray-haired woman absent-mindedly looks through the window at night. The room is poorly furnished and no one will disturb this old woman who has the same hard facial features as the Jo from Nighthawks, but 13 years older. 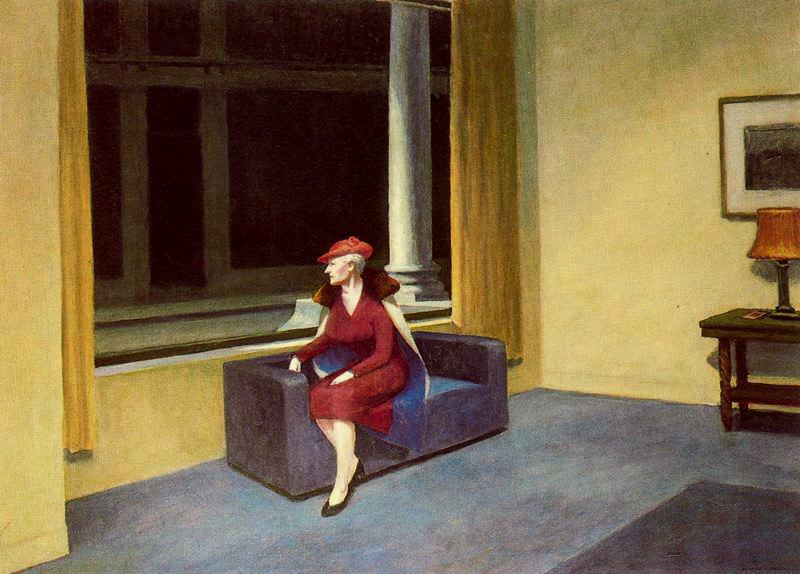 The series of twelve single Marilyn 51 x 41 cm are made with a single screen printing over acrylic paints of various colors. Two of these paintings are monochromatic. They are the precursors of the global imaging desired by Warhol.

An Elvis 2 Times 207 x 180 cm in silkscreen ink and paint was sold for $ 37M by Sotheby's on May 12, 2021, lot 4. The silver paint of the background provides a high reflectivity. Please watch the video shared by Sotheby's.

The catalogue includes a photo in period featuring the actress Jean Seberg, aged 25, nicely playing a terror in front of two double Elvis's in Warhol's studio, including the piece narrated above.
Plus 1962-64 Warhol

Another Double Elvis 208 x 122 cm deliberately displays an extreme difference of contrast between the two overlapping printings which creates an illusion of flicker.

The first Marilyns from 1962 are experimental. Andy's idea is to mix the techniques of acrylic and silkscreen. He makes his hand in a variety of processes, dimensions and positioning of the image that is sometimes already multiplied in juxtaposition on a single canvas.

The Liz selected during the summer of 1963 opens the use of paint for a multiple reproduction with fixed dimensions. She is first seen on a background of silver painting, referring to the movie screens. A first pass of screen printing provides a mark for the colors: pink skin, red mouth, turquoise eye shadows. A second screen printing brings the deep black lines and hair.

In November 1963, Andy is preparing an exhibition of 101 x 101 cm Liz's which will be similar excepted the background color. The paintings used in this exhibition are numbered from 1 to 6. Seven additional specimens were not numbered. The series is identified as the Early Colored Liz.

In the following year, Andy uses his Liz in printed editions, again with backgrounds from various colors.

Liz Taylor died on March 23, 2011. The next day Phillips de Pury announced in a press release that her portrait by Warhol will be included in their contemporary art auction on May 12, 2011. Of course the negotiations with the seller had taken place before the death of the actress, but the media effect was very strong. It was sold for $ 27M.

This number 5 is the turquoise example from the group of six prepared for an exhibition at the end of 1963.

Unfortunately for her, Liz was sickly. Warhol used an expressionist technique for paying tribute to his idol. The violet contour of the eyes up to the eyebrows, the too dark red lips accentuate the appearance of pale face. The turquoise background of this serial number 5 has a chilling effect.

The series of Jackies by Andy Warhol was using eight different images taken from the press coverage before and after the President's assassination, reused as emotional portraits without their context.

The individual screenprints from the recuperated images were serially made on 50 x 40 cm canvases prepared in flat blue, gold or left in white, before being assembled as composite items.

​This work was executed in 1964, the year after the death of the President, as a good example of the application of Death and Disaster in US life, including the fall from an ephemeral celebrity. 24 multiplied Jackies were exhibited in Philadelphia in October 1965. Their composite structure enabled them to be reconstructed from one installation to the next.

This 4 x 4 grid is using six images in respectively 4, 3, 3, 3, 2 and 1 examples, equally mixing eight blue and eight black and white reproductions without the rare gold variants.

As soon as he was invited to work in Annina Nosei's basement in 1981, Jean-Michel Basquiat gathered the elements of his personal mythology. An acrylic, oilstick and spray enamel on canvas 173 x 262 cm is typical. The character is an African warrior in the rough who wields a huge sword and a handful of radiant arrows or lightnings. This artwork was sold for $ 35M by Christie's in 2014.

On November 12, 2013, Christie's sold as lot 15 a simplified version of this image for $ 29M. Just as deliciously terrifying, this 183 x 122 cm acrylic and oilstick on wood painted in 1982 for Annina Nosei brings a better readability of the character, almost life-size in a surrounding of more vivid colors.

The main biomorphic features are retained, such as the skull-shaped head and the opening of the torso to internal organs. He is a tribal leader or an African American champion, with boxer shorts and gigantic feet that provide stability and triumph. The three-pointed crown is larger and in a shining golden yellow. The blood-red eyes are replaced with a gold plating.

Unlike the example of the previous year, the character no longer needs tags to convey his message. The weapons are replaced by a gigantic golden femur brandished like a scepter by this king of high fantasy. He is both winner and victim, ridiculous and autobiographical, in line with Basquiat's scathing humor of the time.
Plus Basquiat