Henri, the only surviving son of the comte de Toulouse-Lautrec, had lived his childhood in the castles of his family. He wanted to be an artist and arrives in Paris in 1882. He enters the studio of Fernand Cormon, a very influential painter and teacher who brought a psychological dimension to prehistoric scenes inspired from La Légende des Siècles by Victor Hugo.

Toulouse-Lautrec follows his master when he sets up his workshop near Montmartre. The young provincial was overwhelmed by the social difference between his family and the humble and hard-working life of the popular classes. Cormon teaches him to look at people with sensitivity.

Lautrec soon went to the cabarets of Montmartre. The fashion is for the chansons réalistes in which innocent girls in later teen age are watched over by pimps to the delight of the bourgeois who come to debase themselves in this world of bad life, among thieves and rapins.

In the fashion for girls is the dyed red hair, with abundant buns. The best known example will be the prostitute Casque d'Or, a few years later. In 1885 Lautrec wrote to his mother that he painted the portrait of a woman whose hair was an absolute gold.

He makes several sketches of his new model. Although very young, she had previously posed for Alfred Stevens. Her name is Carmen. Her face is very recognizable with her upturned nose, square jawline, and the locks falling in front of her eyes. 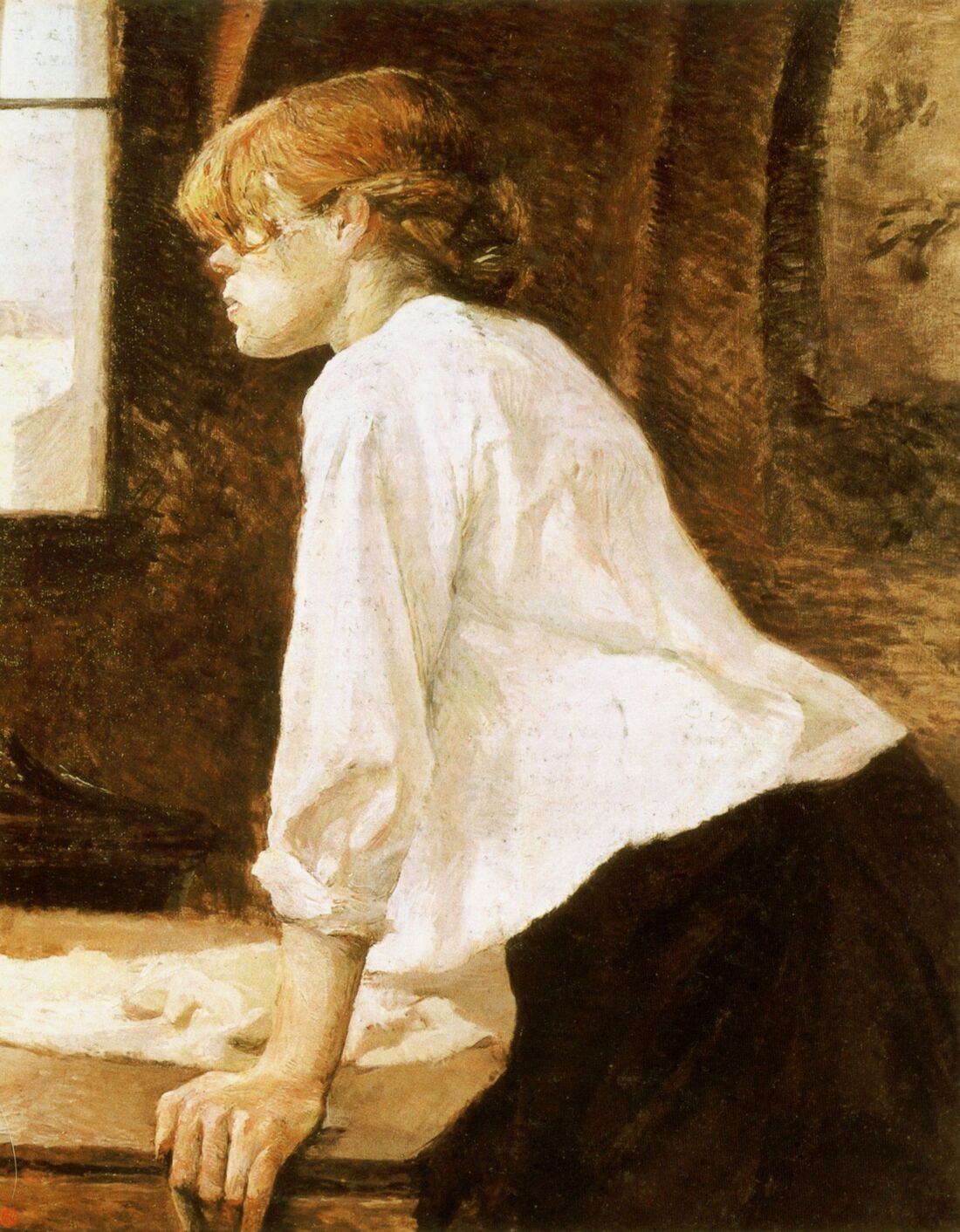 Henri de Toulouse-Lautrec admires the pretty gamines of Montmartre. In 1885, he sketches the portrait of the golden haired Carmen. In 1889, he has a friend taken photos of the Grecian profile of Hélène, his neighbor, aged 18.

Two allegorical works painted in 1889 deal with the extreme attitudes of these young adults, wisdom and bad life. The formats are similar but the technique is different. He recreates the atmosphere of the chansons réalistes of his friend Aristide Bruant, who makes his fortune by titillating the bourgeois in his cabaret Le Mirliton. Both artworks are signed HT Lautrec, hiding the aristocratic origin of the artist.

Carmen "la Rousse" looks at something off-screen, attentively, without paying attention to the strand of hair that runs down her cheek. The title gives the key : in the language of Montmartre, the pierreuse was the prostitute of the lowest rank who solicits while walking in the streets. This painting was originally owned by Bruant and much later by Sacha Guitry.

Henri de Toulouse-Lautrec was fascinated by graphic art, and liked to take as subjects his family and friends. In 1889, he admires the fresh beauty of his neighbour, Hélène, aged 18.

The artist, 25 years old, had already developed his technique of painting à l'essence, which favors pastel colors while retaining the qualities of oil paint. The intimate portrait of Hélène is a good example.

The girl is at home, dressed in a night blouse. Seated at a table, she reads a book carefully, like a schoolgirl. The image is focused on the face and on the long light brown hair. In a great demonstration of the possibilities of post-Impressionism, the rest of the scene, less important, has little contrast.

Lautrec worked from photographs, which had the advantage of avoiding tedious sittings for the model and encouraged spontaneity.

In the late nineteenth century, the maisons closes are on the decline. The holders rely for their business on a fragile and ephemeral respectability compared with the street walkers, young provincial girls who transmit their diseases in an uncontrolled freedom and who are referred as the insoumises by their customers.

Henri de Toulouse-Lautrec appreciates that his cripple prevents him from starting a family. His dwarfism which had been aggravated by an accident to the legs could indeed be hereditary.

An observer of sensuality like Degas and Rodin, Lautrec is excited by the transgression of the bourgeois prohibition of the homosexuality. When they are not working, the brothel girls live their intimacy between them, without a man.

In 1892, the madam of the rue d'Amboise takes some interest in that small chap who is different from the other customers and whose artistic skill is already recognized. She commissions him with small portraits of her residents. Lautrec quietly observes them in their daily occupations.

The artist takes advantage of his whereabouts in the maison of the rue d'Amboise for capturing scenes of female couples in bed in his own technique à l'essence that imitates the pastel.
​
On February 3, 2015, Sotheby's for £ 10.8M Au Lit : Le Baiser, peinture à l'essence on panel 39 x 58 cm made in 1892, lot 18.

A more tender scene also painted in 1892, 46 x 59 cm, was sold for $ 12.5M by Christie's on November 9, 2015, lot 16A. The two young brunettes, with their bodies comfortably laying within the linen, are closely embracing and make a sustained kiss on their shared pillow.

This picture is known with the same title as the example above, Au Lit : Le Baiser.

As evidenced by his 1891 poster for le Moulin Rouge, Lautrec is a keen observer of his friends in their lively amusement. That included the new craze of that time for masked balls.

Painted in 1893, Au Bal de l'Opéra features two groups separated by a balustrade at the top of the famous stairs of the Opéra de Paris. The social classes are not mixed : five comedians and friends are in the foreground, and an old dandy and his partner behind. A blurred crowd is dancing in the great hall.

The men keep their top hat in the fashion of the time, excepted one who is in his comedian's make up. A full bearded lustful face is the most detailed, with wide open eyes, ostensibly arched eyebrows and ambiguous smile. He has been identified as a frequent drinking companion of the artist. Another participant is the Moulin Rouge dancer Jane Avril. The other characters are also identified excepted a masked woman.

In 1894 Geffroy used this picture to illustrate an article on Le plaisir à Paris.

Art is inviting to debasing. Henri de Toulouse-Lautrec is an aristocrat from one of the oldest French families. He jumps without stopping across the too conventional world of the bourgeoisie for accessing the Parisian pleasures of his time where stars and vamps are poor and ephemeral : café-concert, circus, brothel.

The clownesse Cha-U-Kao is one of his preferred characters. Like for the other women featured by the artist, we will not consider her as a sitter. Lautrec was a discrete witness of their life which he expressed with an incomparable spontaneity.

Cha-U-Kao is a contortionist who performs at the Moulin Rouge and the Nouveau Cirque. Like for many artists of the demimonde, we will not know her identity nor her past. She is not young and has the good taste not to exhibit herself any more in the nude. She is openly lesbian and such a female environment pleases Lautrec. In 1896, the series of prints Elles is designed by Lautrec around her intimate life.

In 1895, Toulouse-Lautrec executed several portraits of Cha-U-Kao in his signature technique of diluted oil which brings the delicacy of pastel hues. Lautrec is a follower of Degas excepted that the cabaret superseded the Opéra.

On November 4, 2015, Sotheby's sold for $ 12M one of these portraits à l'essence on board, 81 x 60 cm, lot 68. The entertainer is standing thoughtfully, probably concentrated before performing. She does not appreciate that the artist is watching her and she does not hide her opulent curves. Please watch the video shared by the auction house.
1895

An important artist optimizes the chemistry of his painting based on what he wants to show. In 1895, only 31 years old, Toulouse-Lautrec uses a peinture à l'essence, reducing the proportion of oil to provide his paintings with the pastel flavor that fits so well in his intimate paintings.

In this scene caught in a well known brothel which the artist frequented often, two girls are side by side in light shirts. One of them is lying, eyes half closed. The other is leaning on her elbow, the eyes directed toward her colleague. Complicity or homosexuality ? They are alone, no customer being awaited. Alone? No no, we may imagine that the peeping painter is here also to record the scene.

The Montmartre entertainers had picturesque and appealing names. La Goulue and Valentin le Désossé are the leading couple of cancan dancers at the Moulin Rouge. Other local personalities were La Clownesse Cha-U-Kao or La Môme Fromage.

Lautrec was a keen participant in this bohemian life which he featured in advertisement posters for Le Moulin Rouge, Le Mirliton or Les Ambassadeurs. He made also portraits of these nearly destitute Ladies of the Parisian underworld. An essence on board of Cha-U-Kao painted in 1895 was sold for $ 12M by Sotheby's in 2015.

Painted in the same year as an oil and essence on board 69 x 48 cm, La Goulue en Almée features the locally famous entertainer as an Egyptian dancer, painted in soft colors.

She is standing with a raised head topped by an exuberant bun. The face of the 29 year old woman is aged by the artist as a complacent observer the life in debauchery and addictions which he so enjoyed. In his posters he had spectacularly made ugly in the previous year the face of the 30 year old Yvette Guilbert.

La Goulue will soon give up the cabarets for becoming a lion tamer in her stands of the popular fêtes foraines. In 1904 she and her husband survived an attack by a puma.

In 1897 Lautrec restarted a frenzy of painting. He was happy that a prostitute was accepting to be his hired model. Moreover she was red haired. This anonymous woman was identified by him as Madame Poupoule. Confronted with ill health, he soon retrenched in a new studio to better exercise his artistic skills.

The artist featured his new muse in the nude or semi-nude in the intimacy of an apartment, without a male or female partner.

Le Lit was painted à l'essence with the usual rich palette of Lautrec in 1898 on panel 41 x 32 cm. Madame is reclining on the bed with her legs under the blanket in the foreground. Semi nude in her nightdress rolled up to expose the bare buttocks and thighs. A feeling of quietness is brought by a sleeping position on the cozy pillow while the eyes are open in daydream.