The Beatles liked the Gibson ES-175 guitar of their friend Tony Sheridan. John and George desired to own guitars from this US brand. Their choice went on the Jumbo Electric J-160E that was not regularly available in England. This acoustic-electric hybrid model can be used unconnected, which is nice when you are traveling.

The two identical marvels are delivered to them on September 10, 1962 through a specialized shop in Liverpool. These instruments meet their needs and they make a regular use of them for composition and recording, at home and in the studio. Their collaboration is so close that they swap their Gibsons, certainly unknowingly.

A few days after a Christmas show in 1963, John observes that his guitar has left. He will never see it again.

For the last 45 years, a guitarist living in San Diego owned this instrument without identifying its glorious past. In 2014, he realized the likeness of his Gibson with its widely documented twin which had been kept by George. Serial numbers are very close together.

The veins in the wood allow the identification of a guitar with the same certainty as fingerprints for a human. The best expert of equipment used by the Beatles compared the instrument with period photographs. He is formal and admiring : half a century after being pinched, John Lennon's Gibson has resurfaced in its unmodified configuration, like a time capsule.

This historic guitar is estimated $ 600K for sale by Julien's in Beverly Hills on November 7, lot 278.

Its photo in an exhibit at Austin in 2015 was offered to the public domain and is available on Wikimedia: 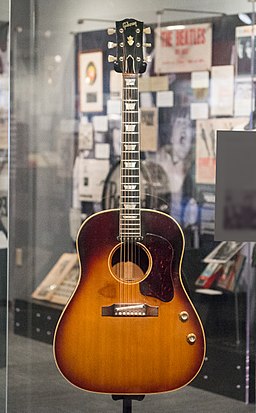 Electric guitars play a key role from very early in the career of The Beatles up to becoming a symbol of the music of the new generation. After the first purchase by John Lennon of a Rickenbacker guitar in 1960, the Beatles frequently use the instruments made by this US brand.

George Harrison had been the first solo guitarist of the group. In 1963, during a private visit in the United States, he bought a 1962 Rickenbacker 425. He soon made it painted in black and white in imitation of the guitars of John, always keen to provide the Beatles with a look different from the musical groups of the past.

This guitar was the preferred instrument of George in the heyday of the Beatles. It had a great career, was once photographed with the four boys, took part in the recordings at Abbey Road Studios and was also occasionally played by John.

This prestigious guitar is estimated beyond $ 400K, for sale by Julien's Auctions in New York on May 17. It is illustrated in the release shared by Reuters.

Three days of sales will be needed by Julien's Auctions in Beverly Hills to disperse the collection of Ringo Starr and Barbara Bach, from 3 to 5 December. No less than seven drum kits used by the musician with the Beatles or in his subsequent career are offered in this auction.

The Beatles reach the top position in the hit parade in February 1963. They now require the best instruments, not only for guitars. In April, Epstein and Starr choose together a three piece drum kit of Ludwig brand in a London specialized shop.

Ringo takes possession of his new instrument on May 12. The activity of the Beatles is intense and even frantic. Between that date and February 4 of the following year, Ringo uses his Ludwig drums in 200 live performances and 180 studio recordings, covering all titles from this period of great enthusiasm preceding their trip to America.

The Ludwig Oyster Black Pearl kit was retained by Ringo and has not been seen in public for half a century. However, it was used in part in 1969 and 1970 by Paul McCartney when he recorded his first solo albums.

The prestigious drum kit of Ringo Starr is estimated $ 300K, lot 696 for sale on December 4. I invite you to watch the video shared by Julien's.
Musical Instrument 2nd page

When the Beatles became a worldwide phenomenon, the manufacturers of guitars were extremely sensitive to the needs of the group. In 1964, the Rickenbacker 325 that was used by John is damaged. The importer of the brand in England, Rose-Morris, rushes to offer to the star a Rickenbacker 1996.

The gift is promotional. The new Rickenbacker receives the nickname Beatle Backer and John's effigy is used in the advertisements of the brand.

In 1968, the same instrument is the subject of another gift. Epstein had died in the previous year and the boys are not trained to run their own business. Relationships are strained for personal reasons. Ringo leaves the group at a key stage of their recordings in progress.

Ringo needed two weeks of holidays for keeping quiet again, during which he composed songs. The other three are worried about a possible termination of the group and the come back of Ringo is warmly welcomed. John gives his Beatle Backer to Ringo.

Ringo Starr had kept the instrument. It is estimated $ 600K for sale by Julien's Auctions in Beverly Hills on December 4, lot 778. I invite you to watch the video shared on YouTube by the auction house.

Riddle: Who is the poet whose double side autograph may reach or exceed $ 500K, oh boy?

In 1967, the fame of the Beatles is already huge but still contested. John Lennon wrote in bulk on a sheet the lines of "A Day In The Life" and brought many reworks. Happy with his work, he copied his poem in a more structured manner on the back of the same sheet. This original piece, so typical of the spontaneous creation of John, is for sale by Sotheby's in New York on June 18. The image of the draft is clearly legible as shared in an article in The New York Times.

The words are simple but the thought is dark enough to generate dream and interpretation. After an addition by Paul McCartney, the final version of the song will be banned by the BBC which saw therein a hidden apology on LSD, the serious bone of contention between the generations at that time. Such a case of censorship is extremely rare in England.

Anything that directly affects the creation of a Beatles song has the value of a relic, as I explained in one of my first articles. On July 10, 2008, Christie's had sold 420 K £ including premium a manuscript of Give Peace a Chance, which was not even autograph. John had problems to read his own poem and made it being copied by a girl.

This autograph, sold $ 1.2 million including premium, has got a much better price than the sheet that I had taken as a reference, and thus has greatly exceeded its estimate. Good.
Poems and Lyrics

Returning to the matrimonial home, Cynthia Lennon finds Yoko Ono in a bathrobe, having tea with John. She says : "Oh hi". Adultery is obvious and separation is inevitable.

Paul McCartney was close to Cynthia and Julian. He hums Hey Jules with the idea of ​​comforting the five-year-old boy. He visits Cynthia in June 1968 with this song project. It will be Hey Jude, for a reason of sound. John lets it go. It will be the Beatles' biggest 1968 hit. It was bringing tears to Cynthia's eyes, and Julian was very grateful to Paul for it.

The autograph manuscript was listed for auction by Christie's for April 30, 2002. Paul successfully opposed it in court by disputing the ownership.

There are two almost identical copies of a 33 x 20 cm lyric instruction sheet. Both are unsigned autographs by Paul. The poem is limited to a few lines of the four verses, interspersed with the instructions Break, Middle, and Ending or Ending-Fading.

This piece of paper may seem ridiculous, but nothing stops the fans of the Beatles. Just married, John Lennon and Yoko Ono organized a happening in Amsterdam, where they received their visitors in their room in night clothing for a continuous week. The success was such that they repeated it two months later with the same scenario on the other side of the Atlantic, in Montreal at the end of May 1969.

Of course, these events were also a pretext to create a fetish song, which was in Montreal "Give Peace a Chance". In eleven irregular lines, John scribbles in the text, very short, but where he still manages to pay tribute to Timothy Leary, Allen Ginsberg and twice proclaim Hare Krishna. The Woodstock Festival was to be held in August the same year, the tone is set (with virtually no pun).

His work being unreadable, John had it copied by a young girl who had managed to be accepted inside the room. She recovered the autograph that day or later, whatever.

Still being quite wise, nearly 40 years later, the depositary of this relic went to Christie's. The auctioneer considered it to 200 K£, for sale under number 250 on July 10 in London.

Christie's does not take its customers by surprise for such important pieces: the press release was published more than two months ago. Christie's is right: some feast lovers of 1969 have become rich.

POST SALE COMMENT
​
Sold 420 K £ including fees. Therefore this type of object has buyers, as anybody knew.

For young people, the Beatles songs express the hope for a better life, with more peace and brotherhood. Mark David Chapman, whose life is miserable, is disillusioned by the media information about the gentrification of John Lennon, which he says would be an unforgivable treason. He travels to New York to assassinate Lennon.

The crime takes place on December 8, 1980 at 10:50 p.m. when Lennon returns with Yoko Ono to the Dakota Building where they reside. Chapman, who had been waiting for them in the shade of the porch, fires five bullets in Lennon's back. The murderer is disarmed by the doorman but ostensibly holds a copy of J.D. Salinger's Catcher in the Rye, which tells the inexorable drift of a marginalized teenager.

Later that night, an album autographed by Lennon is found in one of the flower planters in the porch and brought to the police. He bears Chapman's fingerprints, as if he wanted to provide proof of his premeditation. Five hours earlier at the same location, a fan had photographed Lennon signing this album for his future killer.

The album is returned after Chapman's trial to its discoverer who hides it under his bed for 18 years before selling it through the specialist broker Moments in Time Inc. It will be sold by Goldin as lot 9 in an online sale closing on December 12.

Chapman is still in prison forty years after his crime. Suffering from the Erostratus complex, he had not wanted to plead insanity.

​1990 The Beatles Portfolio by AVEDON

The 1960s appear half a century later as one of the most creative periods. With Pop Art, the themes are close to everyday life : the consumer society, of course, but also comic book and celebrities.

In terms of show business, it was a time for pop music and rock and roll. When the top photographic artists are still balancing between black and white and color, the stars do not hesitate : they want color, and as much psychedelic as possible.

A leading photographer follows the trend : on August 11, 1967 in London, Richard Avedon meets the Beatles and shoots portraits of each of the four boys. The boys posed with their beloved attributes : flowers for Paul, a white dove for Ringo, the eye of wisdom in the palm of George's hand and John's round spectacles.

Four selected photos were solarised for a psychedelic effect. The prints range from realism (for Ringo) to a figure close to abstraction (for John). Poster were edited in 1968.

The portfolio of four dye transfer prints 55 x 44 cm each is edited in 1990 in six copies plus three artist's proofs. The colors match the 1968 editions.