Captain Whittell was an exuberant American who had preserved his immense fortune by selling his shares just a few days before the financial crash of 1929. Such a character would have some Duesenbergs : he owned no less than six model J's.

At that time, customers bought the chassis and selected the body shop. The choice was great, which gives an infinite variety to Duesenberg vehicles.

Whittell bought a long wheelbase in 1931 and made it equipped as a coupe by the stylist Franklin Hershey. The result is a surprising example of American Art Deco, including a folding roof that makes this car look like a convertible. The general shape is aerodynamic, anticipating the trend of the automotive design of the later 1930s.

The image is shared with attribution : Arnaud 25, CC BY-SA 4.0, via Wikimedia Commons. 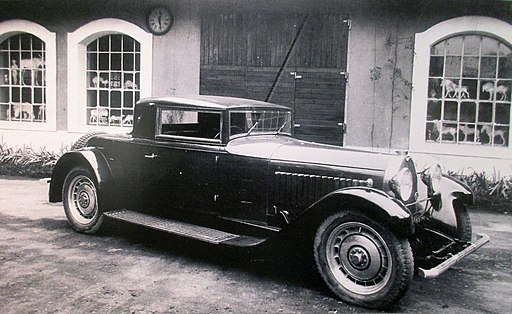 For sport and specially to win at Le Mans, two product lines were clashing at Bentley. It was of course one too much and the company went to bankrupt in July i931.

The choice of the founder of the brand, W.O. Bentley, was for big engines along with the maximum length of the mechanical transmission. He upheld that conviction against his own officers who preferred supercharging smaller engines.

W.O. introduced in 1928 the Speed ​​Six as the sport model on the 6 1/2 chassis. Events proved him right when the 24 hours of Le Mans were won by a Speed ​​Six in 1929 and 1930. The 6 1/2 litre model with front engine and rear wheel drive was otherwise the suitable support for the oversized front covers of a limousine, berline or sedan.

Released in October 1930, the handsome 8 litre with a stronger chassis and enlarged bore is competing in power and comfort with the Rolls-Royce Phantom II. It is often bodied in limousine or saloon. 100 were built.

At that time, the client chose the coachworker. For example a two-seater open-top coupe cabriolet by Barker is the only Bentley 8 litre of its type. This car almost 6 meters long pushed its huge mass to 170 km/h guaranteed by the manufacturer. It passed at RM Auctions on August 16, 2014, lot 233.

A Bentley Eight was made in 1931 on a short chassis with a two door four seater sports tourer body by Vanden Plas for the personal use of Barnato, beside two other Eight in his garage. Keeping its 6 cylinder inline engine in matching numbers and its original  body, it passed at Gooding on August 20, 2022, lot 142.

Its outstanding feature is its original Le Mans-type chassis, consistent with the rules of the time for this endurance race. Its original bodywork had been made ​​by Vanden Plas also in a Le Mans configuration. It was replaced in 1938, probably due to wear, with a nice Brooklands-type racing body with which it is still equipped today.

Bentley was too fast. The Blower had not won at Le Mans against the other models of the brand. The Blower Bentley for sale was one of the last to carry the hopes of this model that the crisis was to wipe out : in 1931, Bentley was bought by Rolls-Royce.

Within eight decades, most cars have been repaired and transformed. One of them however, bodied in boat-tail shape in 1931 by Gurney Nutting, has been preserved in its original state and is considered as the closest copy of what Barnato was wishing. It has even kept its original fabric covering, probably somehow worn.

This car is known by the friendly nickname Green Hornet which was given to it by one of its former owners. It was sold for $ 4.5M by Gooding on August 19, 2007 and passed on August 19, 2012 at the same auction house.

Reputed to be a traditionalist, Ettore Bugatti was perfectly right to trust his son Jean. The skills of the young man both as designer and engineer certainly saved the brand throughout the economic crisis of the 1930s.

The situation is uneasy. In racing, the glorious Type 35 is no more competitive and its successors Types 51, 53 and 54 do not reach the performance of their Alfa Romeo competitors. Too expensive, the Type 41 La Royale limousine appealed only three customers and its target of 25 units in production will never be achieved.

Fortunately the commercial success is maintained by a deluxe coupé designed in 1929 by Ettore and Jean, the Type 46 nicknamed La Petite Royale. Jean is 20 years old.

The Bugatti brand introduces in 1931 the Type 55 sports car with three factory bodywork options : coupé, cabriolet and roadster. Only 38 cars were made overall.

​Designed by Jean, this roadster introduces an increased elegance within the Bugatti range while the top speed is just shy of 180 km/h. In the following year, Jean gets inspired by this avant-garde experience to equip in roadster the La Royale purchased by Armand Esders.

From 1931 to 1936, 14 of the Type 55 chassis are equipped with Jean Bugatti's roadster. One of them made in 1932 was sold for $ 10.4M by Gooding on August 21, 2016, lot 135.
​
Despite the differentiation between sports and competition models, the car for sale had entered the Mille Miglia in 1932. Piloted by Achille Varzi who was then an official driver to Bugatti, it had to stop after the piercing of the fuel tank by a rock.

This car retained a high level of authenticity. It was completely dismantled for a careful restoration. The original engine and gearbox, replaced by replicas during the re-assembly, are included in the auction lot.
Bugatti

At the time of the gentlemen drivers, in 1932, the Bugatti Type 55 bodied as a Super Sport roadster without doors by the factory in the design of Jean Bugatti combines the legendary robustness of the brand with an elegance of an unprecedented refinement. Fourteen are made.

Victor Rothschild, heir to the barony of the British bankers, is not mistaken. Aged 21, he is a student at Cambridge where he leads a playboy life. He does not order La Royale or La Petite Royale but a Super Sport Jean Bugatti, which is assembled in August 1932. In 1936 he will be the very first of the three customers of the Bugatti Atlantic.

The 55 Super Sport generates passions up to current day. In 1985 Dr. Edmonds, a physicist at Boston University, learned that the Type 55 ex Rothschild was going to be auctioned at Sotheby's in London. He jumps into a Concorde and becomes the owner of the wonder for £ 440K, at the extreme limit of his financial possibilities, beyond the maximum price he had himself set.

Edmonds puts the car back into working condition with all its original equipment. In 1993 his Bugatti is First in class at Pebble Beach. He will never part with it. It was sold from his deceased estate, for $ 7.1M by Bonhams on March 5, 2020, lot 123.

To remain competitive in Grand Prix racing, Bugatti replaces the Type 35 with the Type 51 in 1931. The Type 55 is the road version of the 51 with the same 2.3-liter 8-cylinder straight engine, but slightly detuned.

The production of the 55 begins in 1932. One of the very first customers is Guy Bouriat, who targets Le Mans. His car, ready just in time for this competition, is viewed as the best representative of French industry against the Alfa Romeo 8C 2300 which has the same engine displacement and is also supercharged.

A stone from the road pierces the tank, ending this first outing. Bouriat sells the car immediately to Jacques Dupuy. The new owner is the son of the late Paul Dupuy, a press boss who organized motor sport events in the 1910s for Le Petit Parisien and created in 1920 the weekly Miroir des Sports.

Jacques does not want to keep the original bodywork that had been specially built to meet the demanding regulations of Le Mans. He also does not want the doorless roadster designed by Jean Bugatti. His car is bodied according to his drawings as a two-seater Supersport by Figoni.

The contests of feminine elegance are not waived. With this Bugatti driven by a mechanic in livery and accompanied by two dogs, the comtesse de Rivals-Mazères is awarded a gramophone at the Concours d'Elégance du Bois de Boulogne sponsored by the newspapers Fémina and L'Intransigeant.

This one-off 55 Figoni has kept a very good authenticity despite a serious accident in 1994. It is fitted with the original engine of another 55. After 56 years devoted to the happiness of an enthusiastic owner, it was sold for € 4.6M by Bonhams on February 6, 2020, lot 268. Please watch the video shared by the auction house.

Beginning in 1931 the Alfa Romeo 8C 2300 supercharged sports model is ahead of its time with its 2,300 cc straight 8 cylinder engine on a stiff chassis.

This Alfa Romeo is in an original condition which is quite rare for a car from that time, including its matching number engine and a great traceability of the other elements.

The qualifier Monza applied to the short chassis version of the 8C 2300 after a victory in the Italian Grand Prix in the first year of the model in 1931.

The build of many early Monzas had been entrusted to Scuderia Ferrari which was a subsidiary of Alfa Romeo. It is not the case for the car for sale which is a rare factory built of 1933 coachworked by Brianza. It belongs to the third series when the 8C 2300 Monza had become a regular variant with a further shortened frame.

1933 had been a pivotal year for Alfa Romeo.

The 8C 2300 model begins to be replaced by the 8C 2600. Alfa Romeo goes under the effective control of the Fascist government desiring to make it a flagship of Italian industry. The brand does not maintain any more a works racing team despite the great success of the two previous years and a repositionment of the Scuderia Ferrari will be necessary.
Alfa Romeo
Cars of the 1930s
1933

A 8C 2300 Drop head cabriolet by Carrozzeria Castagna in Milan was sold for $ 4.2M by Gooding in August 2009, lot 139. It is illustrated in the story shared by ConceptCarz.

This car displays the top signature elegance of the 1930s. It is a highly authentic example with an engine in matching numbers. It comes from the third series of the 8C 2300, built in 1933 on a long chassis.

Luxury touring cars are a specialty of Packard. During the financial crisis the competition involving Duesenberg, Cadillac, Packard and Pierce-Arrow becomes a matter of life and death for these brands.

In 1932 Packard fitted a 7.3 liters V-12 engine on the DeLuxe Eight chassis usually equipped with an 8-cylinder in-line engine. Originally named Twin Six, the new model becomes the Packard Twelve in 1933. It is a great success despite its fuel consumption over 25 liters per 100 Km : 5,800 Packard Twelve are produced between 1933 and 1939.

A few top luxury cars are bodied by LeBaron or Dietrich. Dietrich realizes small series around a dozen units whose finish is made when he receives the order from the client, allowing to incorporate some ultimate custom variants.

Sold in late 1933 to its first owner, a chassis from the 1934 titled Packard Twelve eleventh series was bodied by Dietrich as an Individual Custom Stationery Coupe.

This two passenger car displays the most stunning elegance of the 1930s style. It was indeed rewarded as the most elegant closed car at the 2005 Pebble Beach concours.