The analytic Cubism was a deconstruction, not far from the Futurism and the later Suprematism. The synthetic Cubism is a reconstruction. The more defined shapes of an object and its bright colors do not match a reality but respond to the imagination of the artist. Arrangements of hermetic symbols anticipate Kandinsky's abstraction.

Juan Gris is a pioneer of synthetic Cubism in mixed media and a direct influencer of the six year older Picasso. Gertrude Stein later commented that "Juan Gris was the only person whom Picasso wished away".

The Spanish guitar is a favorite theme to this artist hypersensitive to its music, born in Madrid and living in Paris since 1906.

Guitare, oil and collage on canvas 73 x 60 cm is a very early example located and dated Paris 12-13 in the reverse. In the center the stringed musical instrument is made of a garish yellow wallpaper overlapped by a painted music sheet.

Juan Gris is close to the artists who develop Cubism : Braque, Léger, Metzinger. He first earns his living with satirical drawings for magazines. In 1911 he begins to paint in oil. Kahnweiler signs in 1913 a contract by which he buys all the current and future work of this young artist, as he had done previously with Braque, Picasso and Léger.

Juan can now devote himself to his art with a freer spirit. He stays in Céret from August to November 1913, without crossing the border because he had escaped his military service and was considered a deserter in his native country.

The choice of Céret is not by chance : Picasso conceived Cubism in that village with Braque in 1911 and was staying there for the third consecutive summer. Juan declares himself as a disciple of Pablo and tries to claim to anyone all the secrets of Cubism. Very annoyed, Picasso avoids this overly enthusiastic young man.

Yet Juan is also an innovator. His works painted in Céret offer the transition between analytical cubism, defined as a flattening of forms, and synthetic cubism, by which objects receive again identifiable contours and bright colors.

Kahnweiler is satisfied with Gris's progress and Picasso can no longer ignore his rival, while maintaining his unilateral animosity. Picasso wanted to be seen as the leader of this cubism which indeed could only appeal the theorists. Shortly afterward Picasso, Braque and Gris will try simultaneously but in vain to save the analytical cubism by inserting on their canvases some newspaper clippings, ultimate avatars of the destruction of perspective.
1913

The first cubism which is called analytical cubism is a search for the integration of the volume of objects within a flat surface. Led from 1910 by Picasso and Braque soon followed by Juan Gris, this technique leads to an explosion of forms that hinders the readability. Perspective and even color become non-existent or secondary.

This hermetic art does not satisfy its own inventor Picasso. In 1912 he sticks real ordinary materials in a composition : ropes and oilcloth. Curiously he does not exhibit this first experience that nevertheless launches the cubist collages. Braque, Picasso himself and Gris continue this exploration of a new artistic language conducive to show the everyday surroundings of table settings and still lifes.

The collage of newspaper clippings is a basic element of the new compositions. Easy to simulate also with the brush, the piece does not break the coherence of the work. It draws the attention of the viewer who seeks some meaning to the words in the context of the image, long before the Dada and Merz revolutions. It is also a fun method to date an artwork.

From December 1913 Juan Gris is the champion of this new evolution of cubism which finally retrieves perspective and color while respecting the primary objective of assimilating the represented object and its support. In the following months Malevich reaches the most extreme abstract art : the uselessness of the image in its support is another seminal advance of modernism.

The table is the support of the arrangement. It is shown at an angle in an aerial view. In a subtle balance the collages participate in three different ways : the newspaper on the table, the wall paper and the stylized musical staves drawn on a white paper. The perspective effect allows the drawings of bottle and violin to overlap the painted and glued areas. Transparency effects disrupt the surfaces.

The war stops this playful phase when Kahnweiler with whom Gris was in contract in Paris is obliged to leave for Switzerland. In the following year Gris gives up his mixed technique and returns to oil on canvas with brilliantly colored compositions that imitate his collages. Nature morte à la nappe à carreaux, 116 x 90 cm, was sold for £ 35M by Christie's in 2014.

Cubism was the most fertile source of modern art, capable of producing completely opposite trends such as Suprematism and Surrealism.

In 1914, Picasso and Gris tried the techniques of collage. They quickly appreciated that the loss of perspective was antagonistic to the will of the artist to express his vision of the world.

Titled Le Livre, an oil on canvas by Juan Gris, 73 x 60 cm, is perhaps his first work of the following year, 1915. Gris wants that his art is no more limited to a raw accumulation of objects, for creating sensations. He puts on the table an open book and a bottle of wine : knowledge and fun.

The wine is readable, it is one of the best Burgundies. The book is not readable, and you will find therein what you are seeking. It is curiously barred with a colored crease, reminiscent of the period of collages. The perspective came back, especially bold. The message allows multiple interpretations: Gris is already quite close to the future spirit of the Surrealists.

Another painting made in the same year on a similar theme, slightly larger with a somewhat more complex composition, was sold for $ 21M by Christie's in 2008.

Dada was created in 1916, but it is indeed by evoking Picasso that Apollinaire coined the word "surréaliste" in 1917. The moods of Juan Gris had a significant role in the development of the new languages of art.

The Cubism of Juan Gris experienced a rapid and powerful development. At first, the analysis of forms is deconstructing the figurative subject. The loss of the third dimension leads to collages.

In 1915, the art of Gris suddenly separates from Picasso and Braque. Gris gathers the objects of his everyday life. Arranged on the table, they make up his universe. Outside, in Paris, it is war. His objects are playing to constitute a new theater, like Cézanne's apples or Arcimboldo's vegetables.

In this sense, Gris is a precursor of surrealism. Painted in March 1915, Nature morte à la nappe à carreaux is a complex and colored composition, where the arrangement in a triangle forms a mask over the comforting support of the tabletop. This oil on canvas 116 x 90 cm, was sold for £ 35M from a lower estimate of £ 12M by Christie's on February 4, 2014, lot 9. Please watch the video shared by Christie's. The image is shared by Wikimedia. 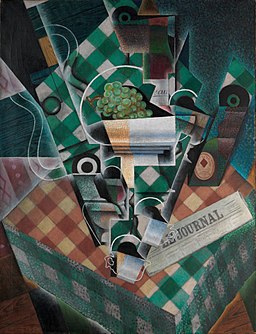 The years 1907 to 1915 lead the art from Cubism to Suprematism. Creativity was remarkable, and we may imagine what were the mutual incentives that enabled artists to travel this evolution (or revolution) finally in such a short time.

The painting by Juan Gris sold for $ 21M from a lower estimate of $ 12.5M Christie's on November 6, 2008 at lot 7 is an interesting example. This oil on canvas from 1915, 73x91 cm, is titled in French "Livre, pipe et verres" (book, pipe and glasses). In a Cubism inspired from Picasso and perhaps from Braque, it is figurative. On an entablature where plans are entangled by the subtlety of color, an open book in the foreground contrasts by its sharpness and clarity. Seen from far away, it seems to be possible to read it, but when we come nearer we see that all lines of the book are scratched.

This painting should be compared with the "pot of geraniums", 81 x 60 cm, similarly inspired and made in the same year, that Christie's sold $ 18.5 million including expenses on 9 May 2007. A folded newspaper was there at the same place as the book on our painting. In the notice of the new catalog, Christie's said that the newspaper symbolized the art of collage, that Picasso and Gris practiced until the previous year. In 1915, Gris seeks to represent a spatial effect that collages that did not enable him to obtain. He uses the effects of stacks and textures, and according to my interpretation (not found in the catalog), the three-dimensional graphic strength of the open book.