Except otherwise stated, all results below include the premium.
See also : Coins 1776-92

April 30, 1789 is the inaugural day of George Washington as the first president of the United States. The creation of a coinage system is becoming increasingly urgent. Throughout 1791 the debates are intense between the creation of a federal factory under close governmental control and the outsourcing to private workshops.

Several craftsmen offer their know-how by producing test pieces in copper for the 1 cent. The similarity of pieces of various origins adorned with the effigy of the President suggests that a guideline was provided. The most active is not American but English : the Westwood workshop in Birmingham for which Hancock is the engraver.

Trials in multiple denomination appear to be a common practice. Pieces are made from the same dies with various metals without worrying about the circulation value. This observation makes incomprehensible the expected use of the 1776 Continental Dollar.

On January 12, 1792 the Senate approves more detailed requirements for the design, triggering a new debate on a possible monarchical interpretation of the portrait of the president. Washington's position on this point is unclear but he does not seem upset when the Mint Act of 2 April 1792 removes his effigy and replaces it with Liberty.

A unique gold coin dated 1792 bearing the portrait of Washington is known. It was struck with dies that were also used with silver and copper. Described for the first time in 1855, this piece has long been attributed to Hancock. It is now re-attributed to the American inventor Jacob Perkins working in Newburyport MA, author of a medal where the drawing of the portrait is unquestionably identical.

This gold coin is close to the Eagle as defined in the Coin Act. It does not meet all the prescriptions of January 1792 and may have been engraved earlier and post-dated. It is graded XF-45 by NGC. Its traces of wear are typical of a transport in a purse that the imagination of numismatists identifies as the President's pocket.

It was for 75 years the favorite piece of Eric P. Newman's collection for its connection to the first President in the most valuable metal during the preparation phase of the US currency. It was sold for $ 1.74M by Heritage on August 16, 2018, lot 5010, for the benefit of institutions designated by the Eric P. Newman Numismatic Education Society. Please watch the video shared by the auction house.

George's Coin, the 1792 Gold Piece that Jingled in George Washington's Pocket, will be Unveiled Tomorrow in Los Angeles!https://t.co/soAlfE3HAV pic.twitter.com/u4IMmmUPVq

An independent state must control its currency. In the early years of the United States, the confusion is total : the majority of circulating coins are British colonial or Spanish issues. An independent goldsmith named Brasher even started to strike his own currency in 1787.

Progress is slow at the beginning. They had to wait until July 6, 1785 for a congressional resolution to promote the dollar in place of the pound, and the Mint Act (or Coinage Act) of April 2, 1792 to decide the operation of a federal plant.

President Washington personally engaged in the first production. The first Federal issue was the half disme, worth half a tenth of a dollar. The urgency was to demonstrate that the State department knew to replace the most common and most useful currency, the shilling worth one twentieth of a pound.

The biggest break with the past and with foreign powers was the adoption of a decimal currency. Disme is a contraction of the French word dixième.

On July 9, 1792, Washington authorizes the first series of half dismes, for which he himself deposits the silver bullion for a total value of approximately $ 100. The Philadelphia plant is not yet equipped, and the production is carried out in the workshop of a blacksmith. The installation of production equipment in Philadelphia's official factory was made on September 7, 1792.

These first half dismes were not signed but an attribution to Birch is plausible.

These early coins were used as a presentation currency for demonstrating the US sovereignty, but most of them started circulating along with the first half dimes (the useless central 's' having disappeared) two years later.

Only one of these half dismes has a special feature. Selected from the origin for the success of its centering, it has been improved by polishing. Remaining in mint condition, this unit is graded SP (specimen) 67 by PCGS.

Its image was shared by the auction house in 2013 on Ow.ly : 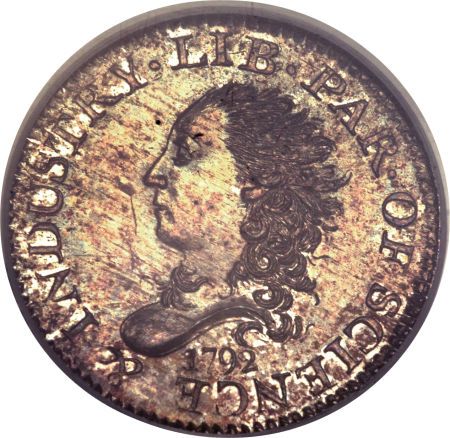 The Coinage Act of April 2, 1792 established both the US currency and the Philadelphia Mint that had to produce it. The first released value, issued in July 1792, was the half disme because it was the smallest silver coin. This operation which directly involved President Washington was essentially political as the small produced quantity did not allow an effective circulation.

Much effort was then applied to the cent, worth 1/100 of a dollar, authorized in copper by the Coinage Act. US people were impatient of possible delays in the currency promised by their Congress but on the other side  the unexpected rise in copper prices could turn to political disaster

This panic of copper is the cause of experiments of bimetallic copper-silver pattern cents : the silver-center cent and the fusible alloy cent. These unusual designs were both unsuitable for mass production.

Projects for full copper coin patterns are not abandoned. The Birch cent is certainly tested at the Philadelphia Mint at the end of 1792, of which it is bearing the date. Two copper variants are described by Judd and Pollock.

Similarities in the design enable to consider that this cent was prepared by the same engraver who also made the half disme. The Birch name is engraved down the neck of Liberty in the so-called Birch cent.

The sudden increase in the price of copper terminated this first federal cent before the production phase. Bimetallic copper-silver trials of 1792, which could not be industrially viable, were probably made in December.

The solution will be political. On January 14, 1793, the Congress is devaluing from 264 to 209 grains the weight of a copper cent. 264 grains correspond to 17.1 grams. The enigmatic Mr Birch disappears from the history of coinage, possibly in the 1793 yellow fever pandemic. The first 1 cent released for circulation will be the chain cent, in March 1793.

1792 Birch Cent sold for $2.585 mm making it the #recordholder for the most valuable penny ever sold! @FUN_Convention pic.twitter.com/Ovpewrni2e

There is no doubt that the Eagle on Half-Globe is a test of dies made with copper and white metal planchets at the Philadelphia Mint in 1792. However, it does not comply with the rules of the Congress Act of April 2, 1792 according to which copper coins must be inscribed with their face value on the reverse.

The archives of the Mint are very incomplete for that first year. We will probably never know what the purpose of this test had been : to qualify a designer or to prepare a new model in copper or silver, which would have been a one cent or a quarter dollar. There was no follow-up.

It is undoubtedly an artist's piece, with on one side a dynamic and domineering eagle and on the other side a Liberty with bun more pleasant than the usual versions of that time with floating hair. The eagle on the globe had been since 1778 the interpretation chosen by the State of New York for the symbol of the USA.

The work is attributed to Joseph Wright, considered at that time to be one of the best portrait painters and whose mother was a wax modeler. He made tests for the Mint, as evidenced by the list of unpaid bills he established on his deathbed in September 1793. It is supposed that Washington and Jefferson, desiring a pretty artistic coinage, had pushed the candidacy of the young Wright, aged 36.

According to the Coinage Act, the quarter dollar is a silver coin. The two surviving copper specimens of the eagle on half  globe weigh between 175 and 180 grains and are thus much lighter than a cent even after the copper devaluation of 1793. The diameter, 29 mm, is almost consistent with the future quarters.

It was not uncommon to test the dies with various materials. The copper coins could be the product of a satisfactory test in copper before a failed trial in silver of which no evidence is available.

The finest copper coin, graded MS63 Brown by NGC, was sold for $ 2.23M by Heritage on January 8, 2015, lot 5511. Please watch the video shared by the auction house. The other piece, graded AU50, is preserved at the Smithsonian.

Prior to 2003, two pieces in white metal of the Eagle on half globe pattern coin were known, with weights of 345 and 242 grains, respectively. The composition of one of them was analyzed by NGC : 50% lead and 48% tin.

In 2003 an inventory at the New York Historical Society revealed two other previously unknown specimens in white metal, weighing 247 and 216 grains, respectively. They were both graded AU58 by NGC. No archive concerning them has been found. The lightest has been de-accessionned. It was sold for $ 1.26M by Heritage on April 24, 2021, lot 4960.

For the establishment of the federal currency, the major problem is not the dollar but the cent, which is used for all transactions of daily life. In the monetary anarchy of that era, it was easy to melt copper coins to recreate them with less weight. In 1787 the Fugio cent is an attempt at federal control over this denomination.

In 1789 George Washington becomes the first president. It is high time to define the federal currency. In the same year, the Fugio cent, directly impacted by the collapse in the price of copper, is terminated.

The feasibility of using copper for small change is questioned. In the entourage of Secretary of State Thomas Jefferson, a bimetallic system is suggested, with a proportion of 3 to 1 in value between silver and copper. Technologically, three solutions are possible : the alloy, the silver coating and the plug.

Bimetallic tests are performed by the Chief Coiner Henry Voigt. Two processes are tried. The silver coating is not tested and the alloy is forgeable.

The Fusible Alloy cent goes straight to failure. The silver is in a too low proportion to alter the color of the copper and the coin would be very easy to counterfeit. It is one of the scarcest US pattern coins.

The Silver Center cent do not have this inconvenience. Slightly conical silver plugs are prepared in a thickness of 1.2 mm and an average diameter of 4.26 mm, providing the required proportion for a metal value of one hundredth of a dollar in a 23 mm copper piece. Inserted in the center of the piece of copper, the silver is quite visible, at least in a brand new coin. It is not acceptable because the production, which includes a melting after the insertion, induces an excessive cost of production.

On December 18, 1792, Jefferson reports to the President. He joins a prototype with a plug and a prototype made by fusion. His conclusion is clear : the cent defined by Congress will be made of copper alone. The risk linked to the instability of the copper price is thus accepted de facto. This statement is ratified by Congress in January 1793 with a decrease in the weight of the cent from 264 to 209 grains.

#HeritageLive: We kick off several days of FUN with some Important Selections from the Bob R. Simpson Collection, including this 1792 Silver Center Cent, SP67 Brown. Bidding opened at $1,875,000. It just sold for $2,520,000.https://t.co/SY2aqMz8e1#HACoins #numismatics pic.twitter.com/EQ9hEn3d6p

Twelve units of the silver center cent survived, to which we may add another one announced by the press in 2009 and a specimen without the plug.

The finest unit from this unusual and prestigious variety, is graded MS67 by PCGS.