From Vétheuil to Giverny

The untimely death of Camille in 1879 rushes Alice Hoschedé into the arms of Monet.

In 1881 he features Alice in the garden of Vétheuil. He remembers the time when the white dress of Camille was expressing purity. Alice is quietly sewing in a rich surrounding of foliage. The sunlight filtering through a large tree provides a continuity in texture between the green and the woman in light blue.
​
This oil on canvas 81 x 65 cm was sold for $ 34M from a lower estimate of $ 25M by Sotheby's on November 4, 2014, lot 29.

That year marks the peak and the end of the first impressionist period of Monet. He is watched by scandal when he can no longer hide his affair with Alice, a married woman. In the following year, his long lonesome trip in Normandy makes him wish to express the variations of light in the landscape at various times of the day.

Claude married Alice in 1892, after the death of Hoschedé.

Monet traveled extensively all along the 1880s in search of the most spectacular scenery of the French countryside. Better than anyone, he observed the light. At the end of this creative phase, he enters into communion with the agrarian landscape, beginning to escape the need to locate the view.

Impressionism considered by Monet is not only a new technique suitable for painting landscapes. It is also a life style far from social conventions and preferring the pleasures of the countryside to the noise of the city.

Monet moved further away from Paris. He settled in 1883 in Giverny with Alice and the eight children of this recomposed family. The difficult period that followed the death of Camille is finally over.

The control of his art is total. His impressionist manner is reinforced by a thick paint and the colors, as always, are beautiful and expressive. A similar view is held at the Staatsgalerie in Stuttgart. They are identified as the rural landscape in Limetz, not so far from Giverny.

This is in some way the culmination of the landscape art in France. Monet believes that his maturity is total. In the next year, he will be disappointed when the light and the wind of the Mediterranea will be too violent for his technique of outdoor painting. A new phase begins for him with more systematic studies of tiny variations of light in structured series: Haystacks in 1890 soon followed by the Poplars and by the Rouen Cathedrals.

After the Impression Soleil Levant it took nearly two decades for Monet to jump to a still more decisive step, with the Meules.

He had been very active throughout that period. His paintings of the Gare St Lazare in 1877 constituted a series that displayed the variations in color depending on the intensity of sunlight and on the thickness of smoke from the trains. His solitary travel in Normandy in 1882 for comforting after the death of Camille is very important : Monet demonstrates to himself that lighting is better than topography for expressing a mood.

Every year the grain stacks will remain alone in the middle of the fields as temporary semaphores that break until the wheat threshing of the spring the monotonous ground devoid of its plants by winter. They will be the suitable support for Monet to perform his observations of colors through all weather conditions and at all moments of time.

Monet loves this theme that is typical of country life without the need to add humans or birds. He begins at the end of summer 1890 with five landscapes in which two haystacks are distant from each other.

According to the sequence established by Wildenstein, the next sub-series is composed of two oil paintings on canvas 73 x 93 cm executed during the autumn of 1890. The alignment of two haystacks leads to the tall trees on the horizon, against the light in the last rays of sunset. For the first time the rest of the image is minimized. The predominance of the expression of colors over theme and form opens the way to modern art.

The second of these pictures, W1273, goes even further by managing to avoid the shadows of the two stacks. All that remains is the light that plays with the contours of stacks and trees and reveals the shimmering colors of the field. It was dated 1891 by the artist, certainly by reference to the year of the first public exhibition of the series, in the gallery of Durand-Ruel.

An enduring symbol of Impressionism from Claude Monet's iconic Haystacks series will lead an important private collection of 8 Impressionist works on offer in #SothebysImpMod Evening Sale on 14 May in #NYC. Learn more: https://t.co/B4xVl8QWFA pic.twitter.com/SMDorfOowE

The deep nature of a landscape can no longer be expressed by a single snapshot. In this series which ends in January 1891 and totals 25 paintings, Monet has captured 25 moments of light of a wide variety : morning, evening, full sun, snow, mist. In the last pictures the color also comes to sublimate the perspective with the reduction of the theme to a single haystack..

Three of them have been specifically grouped as a ultimate achievement of the Meules in the catalogue raisonné prepared by Daniel Wildenstein. Only one stack is visible in front of a retracted landscape. It is truncated either from top or from one side. The color emotion is not challenged by that figurative feature reduced to nothing more than a bulky triangle. In 1896, in front of one of these paintings, Kandinsky was dazzled. 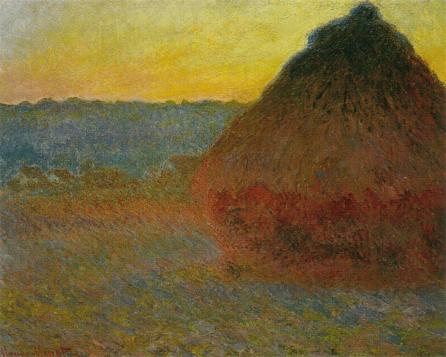 A stretch of poplars alongside the Epte river two kilometers upstream of his home inspired Claude Monet in the spring of 1891 with one of the most fruitful ideas of impressionist art. The sunny or cloudy weather, the time in the day, varied the feeling offered by this humble theme. The arabesque of the waterway elegantly brings a farther row of trees.

The artist created a first series of thirteen paintings, viewed from one single point angled to the left from the other bank of the river or from his bateau atelier. He was working on all these canvas in parallel, looking for the whole variety of light through the trees.

​The tall trees of the nearer row are reflected in the foreground water. The decorative pattern of their regularly spaced vertical trunks was possibly influenced by Japanese woodcuts. The absence of horizon made suitable the vertical format for this scenery viewed upwards. 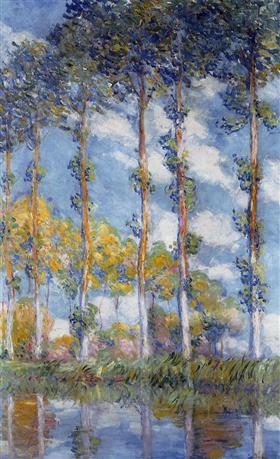 Monet made in 1891 a second series of eleven views of the Peupliers, showing the variety of seasons in a overall total of 24.

During summer Monet had to purchase temporarily these fully grown trees for avoiding their falling before he completed his series.

After this exciting self training, the artist was ready for his systematic study of light effects on the cathedral of Rouen which amazed all art lovers in 1892.

The achievement by Monet with his Meules series in the winter 1890-1891 is a breakthrough. He now desires to concentrate in the instantaneous effects of light, ever changed by season, weather and hour. Les Peupliers, painted outdoor near his home in 1891, is the first experiment in which he offers different views taken from the same exact viewpoint.

Monet dedicates most of 1892 to the facade of the Cathédrale de Rouen. He will rework his paintings in the meantime between his visits and afterward until 1894. He selected his 20 preferred opuses for an exhibition by Durand-Ruel in 1895.

In his first visit in Rouen, he takes two views from the street. The rest will not be a homogeneous series but four sub-series successively taken from the window of different apartments or shops.

The next stay is a great demonstrator of the new conception of the series. The subject is the changing light on the stone of the portal from midday to twilight, with only a limited area left to the sky. Le Portail (Soleil), oil on canvas 100 x 65 cm, is arguably the most luminous of the series beside the other example kept at the Met. It was sold for $ 24M by Sotheby's on May 10, 2000, lot 15. The image is shared by Wikimedia. 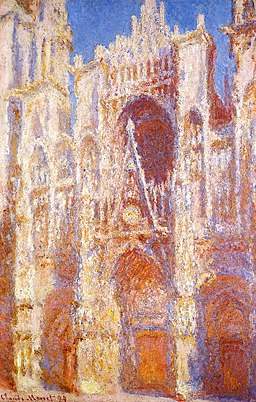 After the views of the Meules throughout the winter 1890-1891, the Peupliers painted in 1891 mark a turning point in the creativity of Claude Monet now attentive to express the tiny variations of light in a single composition.

In January 1893 Monet is working outdoors at Bennecourt, not far away from Giverny, and watches the ice blocks drifting on the Seine river. He prepares his series carefully until the thaw before finishing the paintings in his studio according to his usual practice. Very similar at first sight, these artworks display significant variations of the atmosphere.

The view numbered 1337 by Wildenstein is titled Glaçons, Effet blanc. The artist shares the chilly mist of that winter which he likes so much. This oil on canvas 65 x 100 cm was sold for $ 16M by Sotheby's on November 6, 2013.

On November 14, 2017, Sotheby's sold for $ 23.4M the Wildenstein 1336, lot 25. In the same size as the 1337, it is colored by an attenuated sunlight. The thaw is less advanced and the ice blocks closer to the observer define the water plane above the reflections of the tall trees.

The art of Claude Monet is a continuous progress. 1336 anticipates the magics of the Nymphéas plane marking the surface of the pond that will occupy him from 1905 to 1919.

Please watch the video in which Sotheby's also shows another landscape coming at the same auction sale.

Claude Monet is obsessed with the most subtle variations in colors. The nearby river of his Giverny property offers the total tranquility needed for his unprecedented experiences. With the series of Peupliers in 1891, he installs several easels in parallel and passes from one canvas to another according to the modifications of the light.

Les Peupliers, like Les Meules in 1890-1891 and Les Cathédrales de Rouen completed in 1894, address all the hours of the day, offering too much contrasts between the paintings of the series. The success of these three sets is considerable with the public but the aesthetic result cannot fully satisfy the demanding artist.

During the summer of 1896 Monet gets up every day at 3:30am, operates up to 14 canvases in parallel with the help of an assistant always at the same place at the confluence of the Epte and the Seine rivers, paints the mists when they dissipate at sunrise and leaves for the rest of the day. The title of the series is Matinée sur la Seine. Some paintings are panoramic but others are square, which is bold for a landscape.

He has no luck. Summer and the beginning of autumn are very rainy. He finishes only four paintings at the end of this season. One of them, 89 x 92 cm, was sold for $ 20.5M by Sotheby's on May 14, 2018, lot 15 . The poor weather brings soft contrasts without saturating the shadows.

​Please watch the video shared by the auction house.

A highlight of #SothebysImpMod Evening Sale in #NYC, Claude Monet's Matinée sur la Seine is now on view in London. Stop by 34-35 New Bond Street through 5pm GMT tomorrow to visit this dreamlike scene and head over to our website to learn more: https://t.co/5MHWXEdwzu pic.twitter.com/cSZJwSAYcf

Monet returned to the same river bank in 1897 without changing anything in his creative process from the previous year, bringing the total of the Matinées to 22 paintings.