Except otherwise stated, all results include the premium.
​See also : Sciences
Chronology : 1987  2007
Fossils are classified in the chronology of the species.

The allosaurus was the king of its land during the Upper Jurassic period around 155 million years ago, but its geographical distribution was apparently limited : most skeletons are excavated in Wyoming. The silting up of a river or a mudslide had buried these dinosaurs before the bodies were dislocated and the fossilized bones were kept in excellent condition.

The allosaurus has a remarkable similarity with its much later successor the Cretaceous tyrannosaurus but it is smaller. It has all the characteristics of the most formidable predators. The claws gripped and lacerated the prey and the 7 cm long teeth were curved backwards to prevent the victim from escaping. The very tall hind legs attest to its frightening power.

An adult specimen can reach ten meters. A specimen with that length and mounted 3.50 m high ready for an attack was sold for € 3.07M from a lower estimate of € 1M by Binoche et Giquello on October 13, 2020, lot 140. Three ribs have traces of wounds, certainly in a fight with another beast.

The inhabitants of the Earth sometimes have difficulty in supporting one another. I take the example of a terrible battle that was fought in the Jurassic.

The techniques of discovery and excavation of fossilized dinosaur skeletons are improving, and recent findings supplement and amend our knowledge. It is a matter for professionals, of course. Wyoming is their preferred ground, for the abundance of such remains.

In spring 2007, researchers at International Dinosauria were excited by the discovery of an allosaurus, whose dentition is well preserved. As they progressed in the recovery of bones of this flesh-eating dinosaur, they make a stunning and unprecedented discovery : a stegosaurus skeleton is mingled with the bones of the allosaurus.

There is no doubt that the animals killed one another 155 million years ago. Their corpses did probably fall into a river or were quickly buried by a mudslide, and the skeletons were not dispersed by other predators of the time.

It was anticipated that the dinosaurs were fighting. Grass-eating specimens were often the losers, as already shown by the bite of an allosaurus in the neck plate of a stegosaurus. But the discovery of two skeletons together was a considerable scientific novelty.

When paleontologists begin to release a new fossil in 2013 they immediately believe that it is an allosaurus. After the completion of its excavation in 2015 and of its preparation in 2017 they observe that this beast was different from allosaurs by a slightly larger quantity of teeth. The bone structure also has a few unprecedented characteristics including an extended shape of the pubis.

This dinosaur 2.60 m high, nearly 9 m long and 70% preserved was an old adult. It probably died by a fall in the river and not in a landslide because its bones were not compressed during the fossilization, allowing for example to construct with accuracy the three-dimensional shape of its muzzle. Its bone pathologies are discernible.

It has been inspected by specialists but it remains to find its actual place in the evolution of theropods. Its next owner will be invited to contribute to its scientific designation.

After a public exhibition on the first floor of the Eiffel Tower, this fossil was sold for € 2M from a lower estimate of € 1.2M by Aguttes on June 4, 2018, lot 1. Please watch the video shared by the auction house.

Juvenile specimens are extremely rare, perhaps because their death was often due to predators that showed poor respect for the integrity of their bones. They are interesting by the proportions of their limbs still in growth phase. The first excavation of the bone of a young allosaurus in Wyoming was performed in 2006.

Since 2002 in Paris, la Nuit Blanche is an annual cultural event during which activities are offered free to the public for much of the night. With a sense of media, on the Saturday of the 2010 event, Sotheby's opened until midnight the exhibition of its sale of natural sciences. The auction took place on October 5, 2010.

On this occasion, the comfortable room of Sotheby's was occupied by one of those antediluvian horrors that excite both imagination of adults and passion of children: the fossil skeleton of a carnivorous dinosaur.

The happy tenant is a large size allosaurus, 10 meters long, which further strengthens the likeness with a tyrannosaurus. It is 70 % complete. It was sold for € 1.3M.

During the Jurassic around 155 million years ago, the quadruped herbivore diplodocus was  facing the allosaurus in the muddy lands of current day Wyoming. Its giant size may have discouraged the predators. The neck and the stabilizing tail are extremely long, allowing the dinosaur to feed on grasses or leaves as it fancies.

A skeleton fossil 13 m long passed at Aguttes on June 13, 2019, lot 1, despite a pre-sale exhibition at Heathrow Airport.

A specimen of fossil skeleton from the species Kaatedocus Siberi was sold for € 1.44M by Binoche et Giquello on April 11, 2018, lot 72. This small diplodocus is 12 m long and 3 m high.

Dame Nature created twice the most terrific beasts, the allosaur in the Upper Jurassic 155 million years ago and the Tyrannosaur at the end of the Cretaceous 66 million years ago. Elderly specimens from both species could grow up to more than 10 m from muzzle to tail's end.

In the mean time the carnivorous dinosaurs had not lost their domination over their territories in current day Wyoming and Montana, in a favorable environment of tropical and sub-tropical forests, lagoons, swamps, and river deltas. One of them, living during the early (lower) Cretaceous 110 million years ago, was the 3.40 m long deinonychus, a wording describing its 5-inch impaling claws.

A detailed study of a deinonychus in the 1960s led to reconsider the opinion about the behavior of the carnivorous giants, from then considered to be agile and fast in their horizontal running posture with stretched tail, so obsoleting the slow standing of the previous popular imagery. Its unusually long stretched arms were used in the attack and the large optic lobes attest for a sharp eyesight. Wrongly identified as the Velociraptor, this species became one of the star dinosaurs in the Jurassic Park franchise.

Further research on the physical capabilities of the deinonychus could help to model the transition from reptile to bird through the archaeopteryx, in the Jurassic, 40 million years earlier.

#AuctionUpdate In an exhilarating end to our Evening Sales, THE RAPTOR sold with a price realized of $12.4 million pic.twitter.com/uaVEkGtOmk

The successive discoveries of tyrannosaur fossil skeletons allow us to better understand the characteristics of this beast which lived at the end of the Cretaceous just before the final disaster of that era 66 million years ago. Stan is one of the specimens which provided the most elements to these analyzes.

We have to face the facts : the tyrannosaurus, a distant successor to the allosaurus, had characteristics much more efficient than humans, in terms of sight and smell, running speed, strength and appetite. I have no reliable data about its intelligence.

The deposits are mainly concentrated on the Hell Creek Formation, an island continent bordering Montana, the Dakotas and Wyoming. In the lifetime of the terrible lizards, it was a coastal plain filled with swamps, forests and estuaries. The sediments had been displaced by the slow rising of the Rocky Mountains down to a width of 100 m or more in which the discovery of fossils is virtually unlimited.

The distribution of the species was possibly wider, but the swamps of these Badlands originally limited the dispersal of the skeletons and provided good conditions for fossilization.

Hell Creek has been known since the beginning of the 20th century as a reservoir of tyrannosaurs.  More than 50 specimens have been found.
​
It was an amateur prospector who discovered in 1987 the hip bones of a specimen that was given his own first name, Stan. An error in paleontological interpretation delayed the researches. The excavation required 30,000 hours of work between 1992 and 1995. This male tyrannosaurus, approximately 70% complete in mass, is one of the largest specimens, measuring 11.3 m between the muzzle and the tip of the tail.

Traces on the bones provide valuable informations on the life of prehistoric animals. Stan had lesions created by the teeth of other tyrannosaurs. His broken neck had been healed by fusion of two injured vertebrae. He ate an edmontosaurus and a triceratops just before his death. In our time he plays the stars with more than 60 complete casts for use in museums and exhibitions.

The fossil includes 188 original pieces, compared with the 350 bones of a complete animal. The skull is almost perfect. Missing elements are represented by casts. It was sold for $ 32M from a lower estimate of $ 6M by Christie's on October 6, 2020, lot 59. Please watch the video shared by the auction house.

On August 12, 1990 a team of paleontologists completed an excavation campaign in the Cheyenne River Indian Reservation in South Dakota. Upon leaving, they notice that a tire of the truck is flat. Sue Hendrickson takes advantage of this downtime to go to a cliff unexplored by the group. She finds the fossil remains of a tyrannosaurus rex that will be identified by her first name, Sue.

The bones had not been scattered. The animal had lived about 67 million years ago and probably died in a stream of water that pushed it against some obstacle.

The tyrannosaurus is the most spectacular of the dinosaurs, and Sue was the largest and most complete specimen at the time of its excavation. The skeleton is 90% complete by mass and 73% by the number of elements. The cranial fossil weighs 270 kg and is 1.40 m long and the teeth are almost intact.

The owner of the land, a member of the Sioux tribe, claimed that the team had paid him the right to take and clean up the fossil, but not the transfer of ownership. Justice follows and he becomes the sole owner of Sue. He then commissioned Sotheby's to manage the auction. Due to Sue's exceptional scientific interest, paleontologists were worried about the risk of purchase for a private collection.

Nothing equivalent had happened on the market. On October 4, 1997 the bidding was started at $ 500K. Sue was sold for $ 8.4M to the Field Museum of Natural History in Chicago.

At the time of the sale, this dinosaur had been identified as exceptional but had never been mounted. Its exhibition at the Field Museum was inaugurated in May 2000. Scientific investigations have not been interrupted. The age of the animal is estimated at 28 years, making it until 2013 the dean of the tyrannosaurs. It was 12.30 m long and 4 m high at the hips and its weight in life was estimated at about 10 tons.

The image is shared by Wikimedia with attribution to the user Zissoudisctrucker. It shows Sue in its most recent display configuration at the Field Museum. 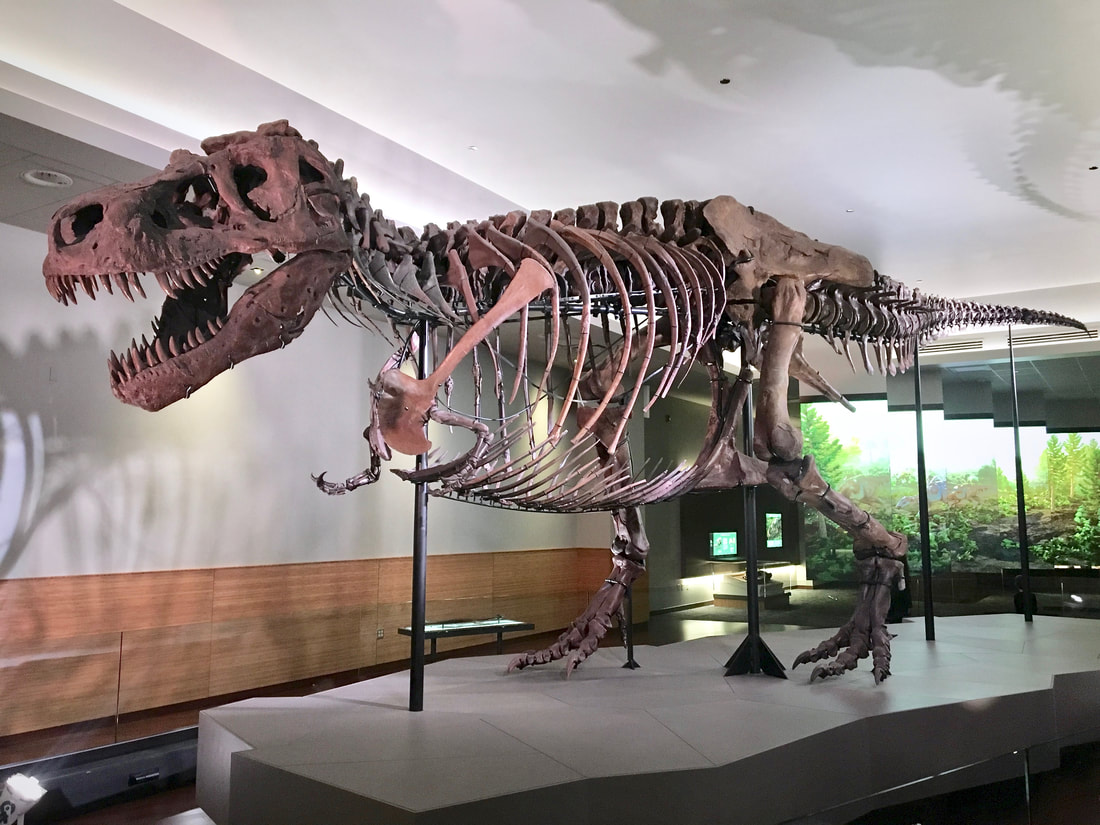 In the popular imagery, the quadruped herbivore dinosaur Triceratops is the heavily armored giant rival of the tyrannosaurus, around 66 million years ago during the Late Cretaceous.

On October 21, 2021, Binoche et Giquello sold for € 6.7M from a lower estimate of € 1.2M the fossil of Big John, considered as the largest known full triceratops, lot 1. It is illustrated in the pre sale release shared by Drouot.

Big John had been wounded and probably killed in battle as evidenced with a severe tear below the neck, made from the horn of a similar beast. It has been discovered in 2014 in South Dakota and cleaned at the Zoic workshop in Trieste. Its displayed position ready to charge is inspired from the Wall Street Bull.