Type IIb diamonds are less than 0.5 % of the diamonds. Their most important source is the Cullinan mine in South Africa. The IIb includes the 70.21 carat Idols' Eye and the 45.52 carat Hope.

The Wittelsbacher is a diamond in an extremely rare color, an exceptional size and a royal provenance dating back to more than three centuries ago. This historic piece is contemporary with the Koh-I-Noor.

This Indian greyish-blue diamond weighing 35.56 carat of VS2 clarity is chosen in 1664 by King Philip IV of Spain to enter the dowry of his daughter, the Infanta Margarita Teresa. The princess is well known for being in 1656 the main character of the Meninas of Velazquez. So this diamond is a contemporary of the royal glory of the Koh-I-Noor, the Regent and the Orlov. Entered in the Bavarian royal family by a marriage in 1722, it was then known as Blaue Wittelsbacher.

It was sold by Christie's in 1931 with the crown jewelry of Bavaria, and for £ 16.4M on December 10, 2008, lot 212. It has been purchased at the latter sale by Graff Diamonds. Its image before being recut by Graff is shared by Wikimedia : 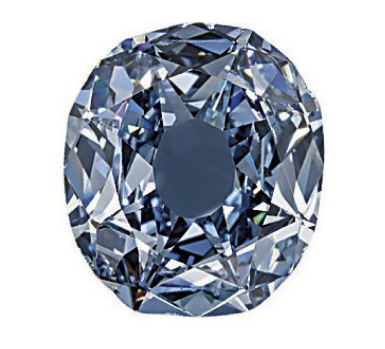 Throughout the twentieth century the De Beers cartel managed to control the diamond trade, accumulating an immeasurable wealth. The trust becomes a family business when a former buyer of diamonds of German origin named Ernest Oppenheimer becomes chairman of the company in 1929.

London is a hub for international operations and price controls. Sir Philip Oppenheimer retired in 1993 after 45 years as head of the Central Selling Organization of the cartel. This powerful position enabled him to keep exceptional gems.

On May 18, 2016, Christie's sold as lot 242 for CHF 57M from a lower estimate of CHF 38M the Oppenheimer Blue that had belonged to Sir Philip. Weighing 14.62 carats, it is the largest fancy vivid blue diamond ever offered at auction. It is estimated CHF 38M It has been set on a ring by Verdura.

The clarity of the Oppenheimer Blue is excellent, graded VVS1 by the GIA. However, it does not reach the absolute purity of the Blue Moons, sold for CHF 49M y Sotheby's in 2015, whose stunning clarity generates a phosphorescence effect under ultraviolet radiation.

The exceptional saturation characterizing the fancy vivid blue hue is enhanced on the Oppenheimer Blue by a highly efficient rectangular cut.

I invite you to admire this masterpiece of jewelry in the video shared by Christie's :
Jewels
African Diamonds

De Beers exhibited their finest diamonds at the Millennium Dome in London throughout the year 2000. The Millennium Star is an astonishing white diamond weighing 203.04 carats. Facing it in the cabinet, eleven blue diamonds are totaling 118 carats. All these wonders had been extracted from the Cullinan mine.

One of these blue diamonds was oval cut. Weighing 10.10 carats, it is not the largest of the eleven but it is indeed the most spectacular. It was certified Fancy Vivid Blue Flawless in 1999 by GIA with the designation De Beers Millennium Jewel 4. Mounted on a ring in a surrounding of small white diamonds, it was sold for HK $ 250M by Sotheby's on April 5, 2016, lot 1843.

This unprecedented treasure insured altogether for £ 350M excited high appetites during the show at the Dome. On November 7, 2000, a commando of four equipped with a ten ton earth digger, sledgehammers, smoke bombs, gas masks and bulletproof vests come into the Dome, ready to celebrate the new millennium with the biggest heist ever.

The gang was under surveillance and 200 police officers had been mobilized. The head of the counter operation had decided to let the robbers go up to the showcase window for security reasons because arrests are easier in a closed room.

This pear shaped fancy vivid blue weighing 9.75 carats ws mounted in platinum. Its clarity is VVS2. It is accompanied by a diagram by the GIA stating that ir may potentially be upgraded to Internally flawless.

It had as a pendant a fancy blue diamond of same shape and mounting, weighing 9.15 carats in VS1 clarity, which was sold for $ 2.96M in the same sale as above, lot 38.

​It is now referred as the Zoe.

The ground continues to unearth important diamonds. Yet, the discovery announced by Petra Diamonds in January 2014 of a 29.62 carat blue gem from the much famous Cullinan mine in South Africa aroused a particular interest in the diamond community.

The new diamond is fancy vivid blue without inclusion, which is already a great rarity. It was purchased by Cora International, headquartered in New York, which processed it. This fancy vivid blue cut to 12.03 carats is the largest internally flawless blue diamond in cushion shape.

Once completed, it revealed even more exceptional qualities. Its ocean blue color is perfect without a secondary hue. It has no fluorescence. An exposure to ultraviolet radiation generates an intense orange-red phosphorescence that persists for about twenty seconds, a sensational feature which is known only to a few blue diamonds of absolute purity.

It is a masterpiece in both its size and features. It was named The Blue Moon in reference both to its shape and to the saying 'Once in a blue moon' that means a total rarity. It seems inconceivable to find better in its class, especially since the production of the Cullinan mine tends to decrease.

The Blue Moon was sold for CHF 49M from a lower estimate of US $ 35M by Sotheby's on November 11, 2015, lot 513. Please watch the video shared by Sotheby's. Its record value at US $ 4M per carat rewards its absolute purity generating the phosphorescence effect.

The Cullinan mine now owned by Petra Diamonds still remains the most regular purveyor of type IIb color diamonds, 10 to 20 times rarer than the IIa.

An extraordinary fancy intense blue gem weighing 122.52 carats was discovered at Cullinan in June 2014. The jewelers mapped with accuracy its internal crystalline regularity by using the semiconductor characteristics that are specific to the type IIb diamonds.

This non-destructive analysis enabled to optimize the cut. Four diamonds were produced. The Cullinan Dream is the biggest of the four. It is rectangular with cut corners and weighs 24.18 carats. Its clarity is VS2. It was sold for $ 25.4M by Christie's on June 9, 2016, lot 261.

This diamond is exceptional. Its fancy intense hue is much rarer than the fancy vivid blue. The Oppenheimer Blue, identified as the largest fancy vivid blue ever offered at auction, only weighed 14.62 carats. It was sold for CHF 57M by Christie's in 2016.

Its price of $ 1M per carat is consistent with results obtained on other blue diamonds. A fancy intense blue with a VVS2 clarity weighing 7.64 carats was sold for CHF 9M by Sotheby's on 11 May 2010.

The other highly rare variety of blue, the fancy deep blue, can reach a price per carat of the same level or even higher. The estimate by Sotheby's in April 2016 at $ 2.6M per carat for the diamond of Shirley Temple was nevertheless much exaggerated.

Diamonds are eternal but their assembly within a jewel may change. The same gem can therefore be the star lot of two auctions a few years apart with a different mounting.

This gem is close to the best, in the most prestigious color and a clarity which is second only to Internally Flawless. Fancy vivid blue diamonds rarely exceed that weight. Mounted on a platinum ring between two small white diamonds, it was sold for HK $ 100M by Sotheby's on 3 April 2012.

Its emerald cut is the most prestigious for colored diamonds. It guarantees the natural qualities of the diamond and does not alter the color.

Later identified as the Sky Blue Diamond, it is more accurately described as square cut which better stresses its great shape achievement, and assembled on a more exuberant Cartier ring set with brilliant cut and baguette diamonds. It was sold for CHF 17M by Sotheby's on November 16, 2016, lot 337. Please watch the video shared by WSJ.
Cartier

On May 16, 2017, Sotheby's sold for CHF 42M an exceptional blue diamond, lot 377. It is in the best color, Fancy vivid blue, and perfect clarity, Internally Flawless (IF). The concentration of boron atoms in its crystal made it classify as Type IIb by the GIA, rarer than the Type IIa.

This diamond is pear shaped. Someone had the idea to choose a pink diamond of comparable cut and size. The two gems hanging each to a suite of two white diamonds thus constitutes temporarily the most sumptuous pair of earrings. They are named Apollo and Artemis by reference to the beautiful twins of Greek mythology.

The blue Apollo is now referred as The Memory of Autumn Leaves.

The De Beers Blue, a fancy vivid blue weighing 15.10 carats, is the largest vivid blue made available at auction and the largest internally flawless step cut diamond graded by the GIA. Its stone of about 40 carats has been extracted in 2021 by De Beers in their Cullinan mine.

It is bigger and clearer than the rectangular cut VVS1 14.62 carat Oppenheimer Blue, sold for CHF 57M by Christie's on May 18, 2016. It has the same internally flawless clarity as the cushion cut 12.03 carats of the Blue Moon, remarkable for its 20 second phosphorescent effect after exposure to UV light, sold for CHF 49M by Sotheby's on November 11, 2015.

The step cut, rectangular cut and emerald cut are the best suited to display the perfection of the gem, revealing any defect without pity and displaying the color in its evenly saturated beauty while optimizing the light reflection.