​The lots below do not currently have a position in a thematic page.
Except otherwise stated, all results include the premium.

Claude Monet had developed in Argenteuil his new style of painting that became the most typical impressionism : drawing no longer exists, replaced by spots and textures while fully respecting perspective and proportions. Argenteuil was nevertheless no longer suitable to meet his artistic requirements. His search for the expression of landscape made ​​him travel across Normandie.

He leaves Argenteuil in 1878 due to financial difficulties and settles at Vétheuil, an untouched village further along the Seine, with his beloved wife Camille and a couple of friends, Ernest and Alice Hoschedé. This period also marks his parting away from the Impressionniste group.

1879 is a very bad year. Camille, who had been nursed by Alice during her terminal illness, dies in September. Claude had used much his remaining money for her medical care.

Monet continues nevertheless to paint. His favorite theme is the changes of light over the Seine river, at Vétheuil and on the village 300 m across the river, Lavacourt. He produced about 150 outdoor paintings during his three years at Vetheuil, his last residence before Giverny.

With Haussmann's works, Paris lost its dangerous and unhealthy medieval streets to the benefit of wide boulevards which became the symbol of the social success of the bourgeoisie. Very attracted by the Opera district, the Caillebotte brothers moved in 1879 to the sixth floor of a luxurious building at 31 boulevard Haussmann.

Gustave Caillebotte does not need to sell his paintings. He appropriates Monet's virtuosity, which he adapts to the scenes of his familiar surrounding. He wanted to be seen as a guarantor of impressionism at a time when new styles, notably around Degas, were questioning the basics of the movement.

In his apartment, Caillebotte develops the theme of the balcony, this observatory that ensures the transition between the cozy interior and the grandiose exterior. On May 8, 2000, Christie's sold for $ 14.3M L'Homme au balcon Boulevard Haussmann, oil on canvas 117 x 90 cm painted in 1880, lot 8. The image is shared by Wikimedia.

Seen from behind, the standing man looks at the boulevard above which he has a dominant position. He is a visitor : he kept his top hat according to the fashion of the time, quite similar to the one we see on photos featuring Gustave.

The balance of this composition makes it an example worthy for demonstration, which Caillebotte will exhibit in 1882 at the Septième Exposition des Artistes Indépendants. On a beautiful sunny day, the foliage and buildings appear between the wrought iron grille and the elegant two-tone canopy.

This painting was given by the artist to his notary, who is probably the bourgeois of this scene. 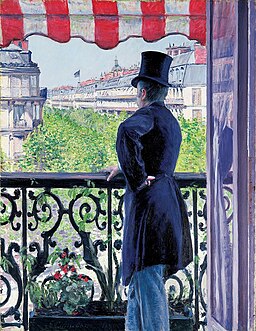 In 1882 the health condition of Edouard Manet worsens. Reclusive in his studio, he continues to work but in smaller formats.

Manet has many friends who visit him. He has always enjoyed to meet women. After they leave, he likes to paint the bouquets they have brought. The choice of flowers nicely reflects the visitor's personality. This joyous freshness certainly soothes the sufferings of the artist.

These ultimate still lifes display roses, peonies or lilacs on a neutral background. The language of flowers is very effective in its simplicity of brush strokes and colors. The stems and the meniscus appear through the glass vase.

Manet had presented this floral still life to the daughter of his doctor in November 1882. In her enthusiastic gratitude, the young woman commented that such flowers will never fade. Acquired in 1938 by Abby and John D. Jr, this very elegant small painting adorned the apartments of two generations of the Rockefeller family.

Gustave Caillebotte is a wealthy Parisian bourgeois. After the death of his mother, he gives up the family home at Yerres and buys an estate in Petit-Gennevilliers to build his house and his studio. Close to the Argenteuil bridge, he thus settles in a place beloved by his impressionist friends where he could devote himself to his passion for boating.

Caillebotte does not need money. His works are most often in relation with his private life, in Paris, Gennevilliers or Trouville. In the early 1880s he desires to be the representative of the earliest Impressionist style and manages to move away from the group, having therefore more time for hobbies and painting.

He has many friends, including a former school fellow named Richard Gallo of whom he has made since 1878 several salon portraits. He manages to attract this young townsman for a visit to Gennevilliers.

This very large oil on canvas 89 x 116 cm painted in 1884 has an unconventional composition as it was liked by Caillebotte or Degas. The Seine river displays all its colors and reflections. On the other side, sparse little houses reveal that we are not in Paris.

In contrast, the bank at the foreground is poorly lit. The bourgeois follows the dog from a distance, without obstructing the central view to the river. Both are seen in profile as silhouettes. They are in the fashion of Paris, the man with his frock coat, hat and cane and the poodle shorn "à la lion".

The river seems to be the main theme of this painting. Exhibited in 1888 with the title Portrait de M. R.G., it was indeed considered by the artist as a portrait of his friend, perhaps meaning nicely that the social gap between city and countryside is not irremediable. Presented by the artist to Gallo, it was not included in the bequest of the Caillebotte collection to the French state. 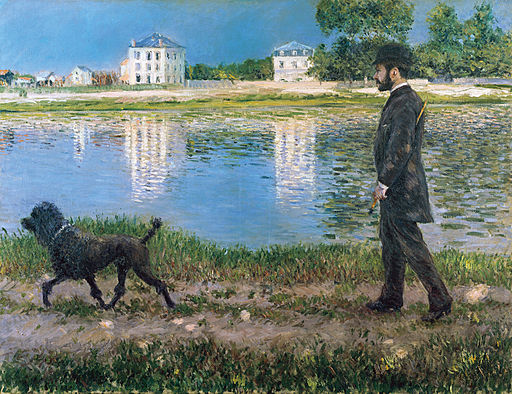 Impressionism considered by Monet is not only a new technique suitable for painting landscapes. It is also a life style far from social conventions and preferring the pleasures of the countryside to the noise of the city.

Monet moved further away from Paris. He settled in 1883 in Giverny with Alice and the eight children of this recomposed family. The difficult period that followed the death of Camille is finally over.

Village life is a delight for Monet. During the cold 1885 winter, his observation of frost leads to a direct interpretation of the changing colors of nature.

Then comes the summer. Claude and Alice love to finish the day in the meadow separated from their garden by a brook lined with poplars. The harvest is performed and the haystacks are awaiting to enter into the barn.

The composition is balanced, as always. A shadow is approaching the foot of the sun drenched stacks. In this soft shadow, halfway between the position of the artist and the poplars, the woman and three young children transform this peaceful landscape into a scene of intimate happiness.

Why #Monet's studies of Giverny are profound reflections of changing times http://t.co/4ndYY4IS40 pic.twitter.com/NOMQjetkNX

Outdoor painter, Monet endeavoured to express the deep essence of landscape. Like Sisley in Moret, Monet waives tourism and selects a pretty village in the countryside, where he can observe throughout the seasons the subtle variety of atmospheres and colors.

In January 1885, snow fell in Giverny. Monet was captivated by this art of Nature. Van Gogh will also dazzle at his arrival in Arles in a wonderful post-snow day of February 1888.

Already the Impressionism of Monet highlights texture instead of forms. The oil on canvas, 54 x 71 cm, listed by Sotheby's on February 5, 2013 is a scene of frost in the gently filtered light of winter. It was sold for £ 8.8M from a lower estimate of £ 4M, lot 16. The image is shared by Wikimedia.

Giverny is welcoming, even in these extreme weather conditions. In the distance, two small figures contrast with the white world. Positioned near the edge of the painting, they do not disturb the magic serenity of the frozen nature.

Monet made ​​nine paintings after this snowfall. Another one, 65 x 85 cm, is showing nature when it begins to shed its white blanket. Its composition is perhaps less poetic, but the subtlety of the snowy surface is an exceptional impressionist feat. It was sold for £ 8.2M by Sotheby's on February 8, 2012, lot 5. 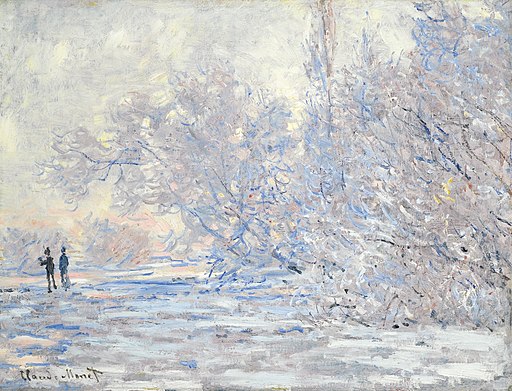 The impressionist solutions are no longer suitable to Paul Cézanne. He comes back to Provence in 1882 with the aim of expressing the quintessence of the most beautiful Mediterranean landscapes.

L'Estaque is one of his first choices, prompted by memories from his youth when his mother had rented a cottage for summer holidays. From the top of the hill and beyond the houses, the bay and the islands of Marseille offer a vast and sumptuous panorama.

From 1883 to 1886, Cézanne rented a small house in L'Estaque. He works outdoor like the Impressionists, but his synthetic and cloisonné analysis of shapes and colors are already paving the way for modern art and cubism.

For such a panoramic theme, Cézanne has the audacity to try a vertical format. The trees that frame the view while masking the lateral coasts provide the same invitation to the infinite as the future colored rectangles by Mondrian. 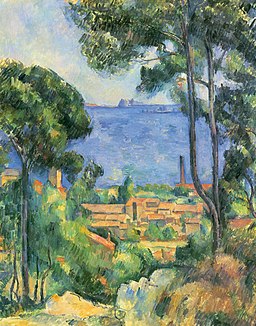 The Trinquetaille bridge inspired Vincent van Gogh for the second time, in October 1888. His goal was to decorate the Maison Jaune, which he saw as the focal point of his Atelier du Midi.

This time, his subject is a close-up view of the stone staircase leading to the span. He had described this project along with a sketch in a letter to Theo on October 13, ten days before Gauguin's arrival.

Vincent shows in this painting the subtlety of the lights on a gray morning. The colors are brought by an almost blue sky, the clothes of passers-by and, truncated under an arch on the right edge of the image, the leaves yellowed by the autumn of a single plane tree.

La Nuit Etoilée, painted in late September 1888, is a night scenery of the same bridge. 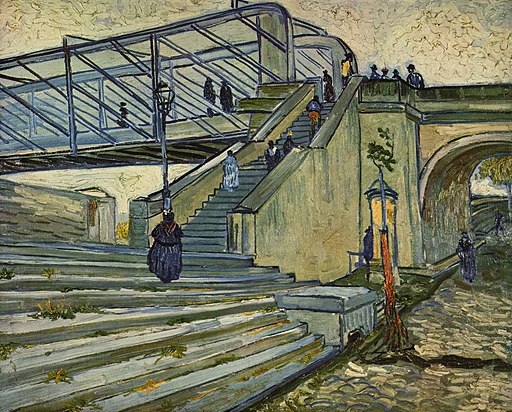 Monet and Van Gogh arrived almost simultaneously in Provence in the winter 1888. Vincent chose Arles and Monet was in Antibes so that they could not meet. At that time, Vincent was indeed more interested in the new style of  the post-impressionists including Signac.

Their quests are opposite. Vincent finds the purity of light, but Monet for the first time is fairly short to transcribe all the subtle shades of color.

During three and a half months, Monet executes his usual approach of selecting some typical views and observing the variations by the hours of the day. But he is not in Normandy. When the sky is clear, the light is so beautiful that extreme hours become secondary. Monet does not find in Antibes that brutality which he loves so much in nature. His color studies however anticipate the series of Meules (haystacks), painted in 1890.

The shining light of Provence has won. The best paintings from his Antibes residence show a blazing sun, but in views that are as topographic as a Vernet. The sea is deep blue while the variations between sky and mountains create a wonderful atmosphere. The ground in full sunlight displays a harmony of rare colors.

Antibes vue de la Salis (also spelled Salice) is a series of four views at various times of the day in oil on canvas 65 x 92 cm.

There was a link between Monet and the van Goghs. Back from Antibes, Monet released ten paintings to Theo for an exhibition by Boussod et Valadon and their subsequent brokering to them. This set included the two views from the Salis narrated above.