When the British invented tourism, they wanted to keep the memory of their travels in their rich mansions. Thus a wealthy clientele commissioned Canaletto, who was  the best of the Venetian vedutisti.

Canaletto was not the first artist to paint realistic cityscapes of Venice. Gaspar Van Wittel (Vanvitelli), perhaps better known for his views of Rome, had preceded him. But the accuracy and realism of the views by Canaletto, who composed his paintings with a camera obscura, are unsurpassed.  He also had as a predecessor Gerrit Berckheyde who represented Haarlem in the seventeenth century.

​Canaletto had a wonderful city as a model, and viewpoints from where he made his works are endless.

​An oil on canvas of very large size 142 x 205 cm is the breakthrough of Canaletto's views of Venice. It features the Piazza San Marco from the tower of San Geminiano. The view is dated 1723 from the progress in the rework of the pavement. The image is shared by Wikimedia. 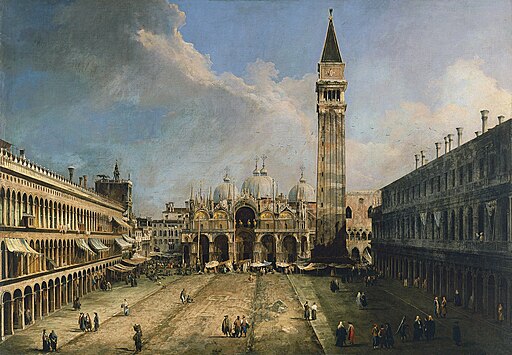 Appearing as a successor to Carlevarijs, Canaletto managed very early to attract foreign customers. His themes are touristic, in a wide variety of views for displaying Venice in its whole historical and social diversity.

He chooses the panoramic view of the Piazza San Marco with the basilica to illustrate the grandiose architecture, and the view of the Grand Canal between Palazzo Balbi and the Rialto bridge to show the life on the gondolas. The canal rotates at a right angle at that place. It is seen from full front when we look through a window from one of the three floors of the Palazzo Foscari.

On July 7, 2005, Sotheby's sold for £ 18.6M from a lower estimate of £ 6M a view of the Grand Canal between Balbi and Rialto, in excellent condition, lot 47. This oil on canvas 86 x 138 cm is dated around 1733 by considerations of style, and is the very last large size example painted by Canaletto with this specific position. The image is shared by Wikimedia.

The provenance of this painting was reconstructed before the sale. It had been listed as early as 1736 in the collection of Robert Walpole, who was the very first British statesman to exercise the function of a prime minister. Walpole belonged to the whig party opposed to royal absolutism and certainly considered Venice, which he had not visited, as a model of a republican regime.

The overview of the Piazza San Marco looking towards the Basilica is a favorite theme for Canaletto and his customers. It was taken from he tower of the church of San Geminiano, providing a wide open bird’s-eye view

About 1723, a painting nearly 2 meters wide is one of his earliest masterpieces.

The topographical accuracy of the monuments is very good. Their symmetry has been improved for a more pleasing effect. On the right side of the Piazza, a sharp shadow going straight to the Campanile disrupts that symmetry.

Canaletto displayed the Piazza as the actual center of activity in the city. The Venetians walk to their occupations, alone or in groups, wealthy or workers, children and even dogs. Laundry is drying on some palace windows. Market stalls are installed in front of the Basilica.

Canaletto had in Joseph Smith a highly influential protector and agent who offered him the access to the market of English travelers.

The artist went to execute extended series of views with seldom depicted viewpoints that matched the pre-romantic mood. He made after 1735 a series of 24 pictures later kept at Woburn Abbey and a series of 21 pictures for the Duke of Marlborough.

Smith kept many views in his house. For his business, he made printed two series by Vicentini, from 14 paintings in 1735 and from 24 in 1742.

The only other example of this view by Canaletto is in the Marlborough series. From that one, the artist made the major topographic improvement of raising the viewpoint to bird's eye at about 6 m over water level. The artist took care to modify accordingly the angles of the monuments. The improved view was included in the 1742 series of prints.

For three centuries, tourists are captivated by the view of Venice from San Marco basin. The concentration of monuments is unique, and they are magnificent.

Carlevarijs transfered to Venice the tradition of the paintings of views already appreciated in Rome by the English tourists. In Venice, the Molo is logically their favorite subject.

Canaletto learned his craft from Carlevarijs. He added very realistic details of monuments with high care brought to the relative position of the buildings and the beauty of light.

Tourists love monuments but also festivals, and precisely the feast of the Bucentaur happens on the sea. In the 1730s, the large format compositions of Bucentaur Day when the basin is covered with boats and gondolas are the masterpieces by Canaletto.

They are supplemented by smaller formats for ordinary days, where the animation is almost similar but more laborious than contemplative. An oil on canvas of this period in middle size format, 69 x 113 cm, was sold for £ 8.5M from a lower estimate of £ 4M by Christie's on July 2, 2013.

This view is even a rare opportunity within this theme for showing an anecdotal detail. In the foreground, a boatman makes ​​a desperate attempt to avoid a collision with another boat. Traffic accidents are not exclusive to our automotive civilization!.

A group of four oils on canvas 47 x 78 cm by Canaletto was supplied by Smith in 1738 to one of his English customers. Two of them were separated several decades ago, including a view of Campo Santi Giovanni e Paolo, which was later sold for £ 7.7M from a lower estimate of £ 3M by Christie's on December 13, 2000, lot 104.

On December 2, 2008, Christie's listed two of the four views. Both are animated, respectively by walkers and gondolas. La Piazzetta was not sold. The Grand Canal was sold for £ 3.8M.

With the orders carried out successively for the Dukes of Bedford and Marlborough, respectively 24 and 20 oil paintings, Canaletto enjoyed the consecration of his art.

In the late 1730s, his best works are altogether the most realistic topographic views of the monuments of Venice, a sunny atmosphere that appeals to tourists and the summary of all aspects of everyday life in the city. The great skill of this artist is to provide a perfect balance between all these topics.

A pair of canvas painted in 1738 or 1739 in his most usual format, 47 x 77 cm, displays on one of them the Piazza San Marco and for the other the Canal Grande to the Rialto. These two focal points of the Venetian activity are the best excuse to offer a picturesque scenery with unlimited entertainment.

The first customer of this pair has not been identified. The fact that they deal with the two most classic Venetian views may suggest that they were not extracted from a larger set. Their condition is pristine. This lot was sold for £ 9.6M from a lower estimate of £ 8M by Sotheby's on December 4, 2013, lot 39. Please watch the video shared by the auction house. ​

This period marks the greater maturity of the art of Canaletto when he teaches his craft to a gifted apprentice, his young nephew Bernardo Bellotto, causing a healthy rivalry between the two artists.

From the late 1720s the landing stage of Santa Maria della Salute from the east toward the Bacino and the Canal Grande is a frequent picture by Canaletto. He processed it in bird's eye view and populated it with his usual small characters, gondolas and merchant ships of everyday activity. The largest canvas, 127 x 205 cm painted in 1744, is kept in the British Royal collection.

A view in a warm afternoon sunlight with strong shadows was painted ca 1740 in a panoramic format wherein the church is trimmed at the right edge.

Canaletto sold his views of Venice to British tourists who were very active in the 1730s. When the Austrian Succession War reduced the travel opportunities of his patrons, he moved his studio to London, in 1746.

Being a foreigner in this big city in perpetual transformation, he did not try to express the atmosphere of remote districts and focused on a limited number of topics including the banks of the Thames and the great plaza of St. James's Park in Westminster.

The view of the Horse Guards across St. James's is one of his masterpieces by its monumental size, 117 x 236 cm. This oil on canvas was sold for £ 10M by Christie's on April 15, 1992. It is currently on long-term loan to the Tate Gallery by the Andrew Lloyd Webber Foundation. The image is shared by Wikimedia.

Canaletto displays the old red brick building of the Horse Guards. Two sketches that have been preserved assess that the artist had been appealed by the announcement of the imminent destruction of the building in 1749. The oil on canvas was probably painted in May or June 1749 and was certainly the view of St. James's Park advertised by the artist in July 1749 as a demonstrator of his art for his visitors.

Really passionate about this fate of a monument, Canaletto observed again this scenery three years later with the scaffolding of the new building. This oil on panel 59 x 110 cm passed in 2012 at Dorotheum on October 17, 2012.

On January 26, 2012, Sotheby's sold at lot 58 for $ 5.7M a view of the Giudecca by Canaletto from one of his favorite viewpoints. It displays the huge church of the Redentore which is a masterpiece by Palladio. Next door, the bell tower of San Giacomo will be demolished in 1837.

This oil on canvas 60 x 95 cm painted between 1747 and 1755 is nicely animated, with carefully spread gondolas gliding on the quiet canal. The composition is bold, with a warship at anchor that masks the lower part of San Giacomo. It is illustrated in the release shared by AuctionPublicity.

Many works by Canaletto had been prepared as pairs. This one was separated from its pendant after 1960. It is neither shocking nor surprising : the conservation of pairs is not essential to the appreciation of his art.

Until its destruction by Napoléon in 1798, the Bucentaur was the festive symbol of Venice. On Ascension day since 1178, this huge state barge with two decks, 35 m long and 8.5 m high propelled by 168 oarsmen, escorted the Doge and the highest dignitaries. The Doge blessed the sea and threw a golden ring in the Adriatic. During the rest of the year the boat remained at the Arsenal.

Unlike his predecessor Carlevarijs, Canaletto is not interested in official celebrations. He prefers to observe everyday life in all the variety of costumes and occupations of this cosmopolitan city. The ambiance of Ascension day is very specific and he does not disdain the subject, but the Bucentaur, while perfectly recognizable, is always far behind the bustling quay and the well-loaded gondolas.

On July 6, 2005 at lot 20, Christie's sold for £ 11.4M from a lower estimate of £ 4M a view taken from the Riva degli Schiavoni, in the superb light of the end of the day, with the Bucentaur docked at the Molo. The image is shared by Wikimedia.

This 152 x 138 cm oil on canvas was painted ca 1754. Canaletto, settled in London since 1746, certainly responded to a specific request from an English aristocrat who will be its first owner. The canvas is still in its period frame of English style, carved, pierced and gilded. 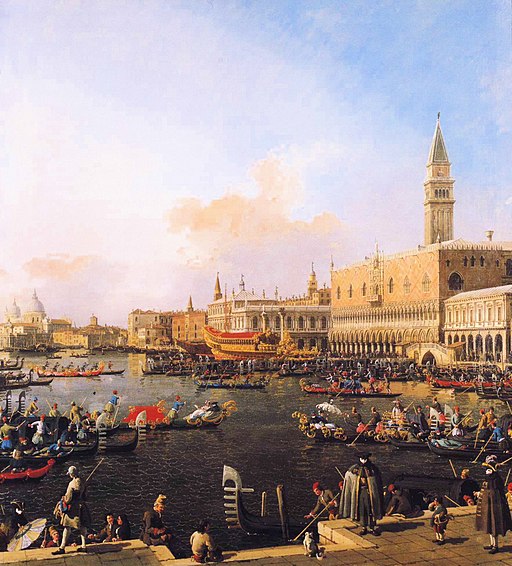