​The production of exceptional carpets started at Tabriz in rhe 16th century under the direct patronage of the Shah. The early carpets are featuring intricate designs including medallions, spandrels and palmettes inspired by Persian miniatures. About 30 complete pieces survive from that period.

One of the best preserved, 6.40 m in length, was sold for £ 1.6M by Christie's on July 6, 1999. It is illustrated in the Magic Carpets article prepared by Christie's in October 2021. Its suggested date is the third quarter of the 16th century. The wool is remaining thick and the colors are very fresh.

This piece had been seized by the Nazis from the Viennese branch of the Rothschilds and restituted by Austria in 1999. After the auction, it is kept in Qatar.

This piece was one of a famous group of 89 so-named Topkapi rugs.

In 1598 CE Abbas I transfers his capital to Isfahan. The city, destroyed by the Mongols in 1387, centralizes the very ambitious cultural policy of the Shah. Everything must be done to dazzle the visitors.

The search for luminosity is carried to perfection, with 17 colors including several shades of yellow. Its repeating pattern of flowers, leaves and plant arabesques is centered by a small medallion, an innovation that provided the illusion of a water lily floating on a pond when the colors still had all their original contrast.

The so-called "Polonaise" rugs, woven in Isfahan and Kashan, can be considered as an evolution of this design a few decades later. Unfortunately their silver brocades are often blackened by oxidation and the dyes are less stable.

The Safavid Shahs developed to its greatest perfection the art of Persian carpet, first in Tabriz and then at Isfahan and Kirman.

Beauty and durability result from a high technical complexity whose climax is reached at Kirman. The weavers use wool and cotton in the same pieces with a wide range of dyes. The colors are dazzling and the themes with flowers, leaves and birds are charming.

The most complex weaving technique uses no less than three weft passes per knot. It is named Vase on a proposal by May Beattie in 1976.

The extreme refinement of Persian carpets reached its peak under the Safavid dynasty. Well known by the connoisseurs, the carpet of Senator Clark had already been described for nearly a century as a masterpiece of Persian textile art. It was exhibited after the death of its owner in 1925 in a museum that de-accessioned it. It was sold for $ 34M from a lower estimate of $ 5M by Sotheby's on June 5, 2013, lot 12.

Its red background is rare and perhaps unique in its class, the sickle-leaf pattern variant of the 'Vase' technique. Its fine floral motifs and its palmettes make it a vibrant and sumptuous artwork in 267 x 196 cm size.

It is always difficult to date and locate an old carpet, if not by considerations of its technical characteristics. The Clark carpet is Safavid and probably Kirman. It is comparable to the best  pieces woven during the reign of Shah Abbas 400 years ago.

Please watch the video shared by Sotheby's.
The image is shared by Wikimedia. 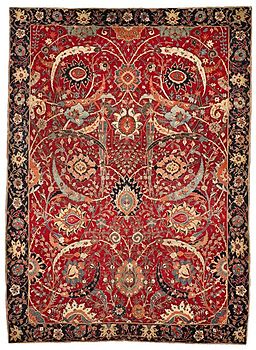 A Kirman carpet was released from anonymity on April 15, 2010 at a Christie's sale in London when it was sold for £ 6.2M from a lower estimate of £ 200K, lot 100. The press revealed that it had been sold six months earlier in Augsburg from an estimate of € 800 by a local auctioneer who refused to publish the result.

This wool carpet is knotted using the intricate Vase technique, suggesting that it was woven in the royal workshops of the Safavid dynasty. It measures 339 x 153 cm and is in outstanding condition except for a few tiny repairs and some corrosion of the black threads. It had been commented in 1938 by an expert who stated for its provenance the prestigious collection of the comtesse de Béhague.

The golden age of Kirman carpets is the reign of Abbas I, who died in 1629 CE. The Béhague carpet is characterized by a very elegant simplification of shapes that Christie's positions around the mid-17th century.

In a magnificent geometric regularity, parallel stems support several pairs of leaves. From top to bottom, the leaves of one stem alternate with the leaves from the adjacent stem. Tiny flowers are inserted into the spaces between the leaves. This decoration anticipates the repetition of flowers and leaves in the highly popular Herati pattern and may evoke some figures from the Iznik ceramics.
Decade 1650-1659

Textile is a symbol of luxury and refinement since immemorial time. But it is a fragile art, and few examples remain to testify to the extreme skill displayed in antique workshops.

A brocade of high complexity measuring 57 x 71 cm, 84 x 100 cm including borders, was created in Safavid Persia 300 to 400 years ago. It is very difficult to date such a piece with precision. Sotheby's sold it on April 14, 2010 for £ 1.6M from a lower estimate of £ 300K. This unpublished piece had been listed at the sale of a collection at the Hôtel Drouot in Paris in February 1912. It had not been seen since that time.

It is a green and red silk velvet woven on a bright yellow ground. The decor is composed of complex patterns punctuated by medallions and including peacocks, birds of paradise and flowers.

Since the reign of Shah Abbas, the Persian carpet was the symbol of the splendor of the new capital, Isfahan. The weaving workshops are developing new techniques that bring an unprecedented luminosity. Abbas dies in 1629 CE.

The craze is growing. The needs of the Shah come first, but the workshops in Isfahan and Kashan get permission to supply other clients when they have time. This fashion reaches Europe. To obtain the same visual effects more easily, the textiles are brocaded with silver and gilded silver. Production becomes more abundant. These rugs went out of fashion around 1700.

In the Polish section of the Universal Exhibition in Paris in 1878, Prince Czartoryski exhibits his collection of brocaded rugs. This type of carpet is henceforth referred to as "à la Polonaise". Their conservation is less good than for previous techniques because the brocades oxidized and the dyes were less stable.

Possibly dated from the reign of Shah Abbas in the first quarter of the 17th century, this piece is woven with a precious silk pile enhanced by an extensive use of gold and silver in the wrapped thread.

This artwork and a pendant carpet had belonged to the elector Augustus of Saxony who gave them in 1695 to Lothar Franz von Schönborn, prince archbishop of Mainz.

They are superbly preserved after a three century hanging on the walls of a summer palace of the Schönborn family, escaping the wear of a usual storage on the floor. This example maintains in its full beauty the original blue, indigo, green, peach and pale yellow dyes.

It had been for 300 year the pendant of the carpet of the previous lot that sold for £ 3.9M. Despite their similar sizes and period, they cannot be considered as a pair.

This example is preserving its sumptuous red border and a high amount of silver-metal thread around the fragile silk wraps.

It is decorated of inverted palmettes and arabesques of flowering stems. The palette includes twelve colors and the silk pile is remaining thick. Warps and wefts are in natural cotton excepted some red silk wefts. The brocade is made of silver gilt and gilt metal wrapped around silk. It still has an end row of original fringes.

This piece had been the cover lot from a group of no less than twelve polonaises in a Rothschild estate auction in 1968 in Paris. The twin of its pair is in worn condition.

On April 1, 2021, Christie's sold a Polonaise carpet 210 x 140 cm for £ 2.06M, lot 129. The brocades have not escaped oxidation, but this piece is remarkable for the thickness of its silk pile and for its intact edges. It has not been restored. These rugs were often produced and delivered in two identical copies. The other element of the pair is on display to the public at the Palazzo del Principe in Genoa.

'A rare survival from a golden age' — a 400-year-old Persian carpet of outstanding quality will be offered at auction for the first time on 1 April: https://t.co/aCl8IJKxnJ pic.twitter.com/L1AyzgIwst