The plant is the basic element of the apothecary. Medical universities maintain gardens to analyse their features. Naturalists are then interested in their variety and undertake classifications. The first flower gardens designed for sole pleasure appear around 1600.

The prince-bishop of Eichstätt is passionate about flowers. His garden has eight sections or terraces where plants are grouped according to their origin. He entrusts the maintenance of the garden and the drawings of the plants to a botanist-apothecary based in Nuremberg, Basilius Besler.

Besler prepares 366 plates with an average of three plants per page. They are classified by season and the reader can compare the phases of a plant including bulb, flower and fruit. The Hortus Eystettensis is issued in 300 copies in 1613, in a very large format 54 x 42 cm. The deluxe version is only printed on one side to avoid the shadow of the back, and hand colored. It may be the most expensive book of its time.

A few copies began circulating in Rome in the circle of the Accademia dei Lincei. This academy is one of the earliest scientific societies in the modern sense of that wording. Its goal is to understand nature from an objective observation. In 1611, the Accademia welcomes into its ranks Galileo and also Faber, the director of the papal botanical garden.

It was known that one of the last sets of uncolored plates of the Hortus Eystettensis was purchased for the use of Faber in 1617. We did not know more. It is probably this one that has just surfaced.

On July 13, 2016, Christie's sold that deluxe copy for £ 1.93M from a lower estimate of £ 800K, lot 173. It is complete of Besler's 366 plates, without the additional botanical text. Before it got its binding, this copy was supplemented with fifteen drawings and one print of a rare plant that was the pride of the garden of Cardinal Farnese. This 1619 dated plate is dedicated to Faber. The whole book was colored by a single hand.

Let us comment the considerable interest of the Roman Catholic aristocracy for flowers. The preparation of the Hortus Eystettensis is indeed contemporary to the artistic study of flowers executed throughout the summer of 1606 by Jan Brueghel from the incitement of the Cardinal Archbishop of Milan.

The Globe Theatre is created in 1599. It is managed by the actors of the Lord Chamberlain's Men company in the form of a share capital. William Shakespeare has little stake in this business but he is the principal author of the plays which are performed there.

This man of the stage died in 1616 without having paid attention to the literary value of his own works. Half of his plays were unpublished. The others had been issued as poor quality booklets of which we can be assume that they were not verified by the author.

John Heminges and Henry Condell, who owned overall half of the shares of the Globe Theatre, judiciously decided to reconstruct with the best possible accuracy the whole of Shakespeare's dramatic work. They knew 36 plays of which 18 had never been published. They will have to buy back the publishing rights to some of them and to retrieve the partial manuscripts that had been entrusted to the actors to perform their own role.

The print is of the top luxury, in relation to the literary magnificence of the work. What would later be called the First Folio is a superb volume of 454 leaves 32 x 21 cm, printed in 1623 by Jaggard and Blount. It is forever used as the top reference for any Shakespearean scholarship.

The production run of the First Folio is estimated at around 750 copies. About 220 survive today. 56 are complete, of which only 5 are in private hands. All but six are from the third issue when the content was frozen and the error of a redundant page has been corrected.
​
Shakespeare is the greatest success in English literature and editions are multiplying. Garrick puts Shakespeare still higher in fashion and Edmond Malone devotes his life to the study of his work. Malone proposes in 1778 a chronology of the plays, observes the literary greatness of the First Folio and has a new edition published in 1790.

On October 14, 2020, Christie's sold a complete copy of the First Folio for $ 10M from a lower estimate of $ 4M, lot 12. In 1809 its owner had submitted it to Malone's appreciation just before having it bound. The expert's autograph letter is joined to the volume. Malone found it to be a fine, genuine copy of the First Folio. A few small repairs will be carried out according to his recommendations. This copy has retained the cleanliness observed by Malone more than 200 years ago.

Only five complete copies of the 'First Folio' remain in private hands, and on 24 April in #NewYork, Christie’s will offer the first complete copy to come on the market in almost two decades during our #ExceptionalSale. https://t.co/orNUeX30H0 pic.twitter.com/k90SszIXD0 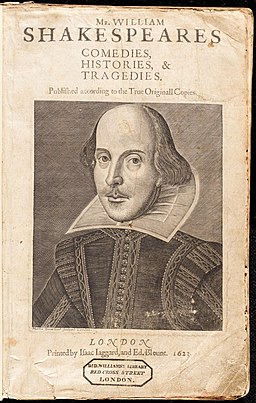 #OnThisDay in 2006, Sotheby's sold Shakespeare’s First Folio in NYC for $5.2m. Having only previously been owned by two people, the First Folio is the first collected edition of plays, without which there may never have been a William Shakespeare. https://t.co/IMGeqgcaoI. pic.twitter.com/C89bgVNPHJ

It has 16 leaves in facsimile. The names of five early owners, arguably Scottish, appear in manuscript prayers and  clumsy poetry in the margins, nearly all of them uncorrelated with Shakespeare's text, for a total of 34 annotated pages. The 19th century morocco binding was made in Glasgow.

For celebrating the 400th year from Shakespeare's death, Christie's devoted a full auction session to the first four Folios on May 25, 2016.

The example offered at lot 101 was not yet known to scholars. It is resurfacing from the descent of a prominent bibliophile who was also a scientist of the Enlightenment. Untouched for two centuries, the book has kept a remarkably fresh condition but the nine preamble leaves are missing and several repairs are announced in the catalog. Please watch the video shared by Christie's.
​
The Second Folio, published for the first time in 1632, is very close to the First Folio with respect to the Shakespearean corpus and the bibliophile had perhaps not desired to own it. The copy sold at lot 102, printed circa 1641, comes from another source.

The other two books were in the same collection as lot 101. The Third Folio was published in 1664. This edition is very rare. At lot 103, its copy has an exceptionally fresh preservation.

The quest for the exactitude of the text was extremely careful. The printing of the First Folio was suspended over a hundred times to make corrections so that one cannot find two identical books.

On December 7, 2010, Sotheby's sold for £ 1.5M a First Folio in very good condition, lot 13. It has the rare feature of being complete as regards to the texts of all the 36 collected plays.

The Puritans fleeing the England of the Stuarts built in Massachusetts Bay the communities that could meet their religious and social ideals. One of the villages, named Cambridge in 1638, specifically had a cultural vocation. Harvard College was founded there in 1636.

The singing of the psalms is a strong element of their liturgy, linking together the first parishioners of that region still in wilderness. Their scholars do not want to use the available British translations. Their new version in English verse takes the excuse of a need to be closer to the original Hebrew text. It was actually a remarkable collective work, and the first sign of their independence from the Church of England.

They now have to publish this text. In London, Josse Glover supports the project and in turn leaves to America in 1638. He did not reach it, but he was accompanied by Stephen Day (or Daye), a locksmith who will be the first printer in New England.

Currently known by the nickname Bay Psalm Book, The Whole Booke of Psalmes Faithfully Translated into English Metre is printed by Day in 1640 in Cambridge and sold by the earliest bookseller of New England, Hezekiah Usher.

The original edition consisted of 1700 copies. For a century, the book was highly successful and often reprinted. Because of its liturgical use, most copies were damaged and destroyed.

The arrival at auction of a copy in good condition of the 1640 edition is an event of the utmost importance for American bibliophiles and patriots. In 1947, one of them went to be more expensive than the Old Testament of the Gutenberg Bible.

Another one is estimated $ 14.2M by Sotheby's on November 26, 2013. Please watch the video shared by Sotheby's. The seller is the Old South Church in Boston which keeps another copy in a similar condition.
Books
religious texts
Decade 1640-1649

Isaac Newton was the most brilliant scientific innovator of all time. Late in his life he laid down the rules that had guided his unprecedented method. One of these rules summarizes in a simple sentence how he created the modern physics : to the same natural effects we must, as far as possible, assign the same causes.

One of his outstanding skills was to develop mathematical methods of high complexity to analyze and support his own physical theories. Even before he was 30, he compared the motion of the planets and the fall of the bodies. Essentially preoccupied with his own understanding of the mechanism of the universe, he published reluctantly.

In 1684 in London, the scientists of the Royal Society challenged themselves to find the mathematical formulation of the law of motion of the planets described by Kepler. All failed. Halley visits Newton in Cambridge. He is stunned : Newton knows the solution but has lost his calculation notes. The orbital movement of a celestial body is an ellipse whose position of the other body is one of the foci.

The scientific stake is highly important and Halley manages to persuade Newton to disclose in their entirety his results concerning the law of universal gravitation. Edited and financed by Halley, Newton's Latin book entitled Philosophiæ Naturalis Principia Mathematica is published in 1687 with the imprimatur of the Royal Society.

The book is difficult in the opinion of the author himself and the circulation probably did not exceed 300 copies but it is of such scientific importance that Halley and Newton took care of organizing their sale through booksellers. One of them named Samuel Smith is more specifically entrusted to the supply onto the Continent and receives about 50 copies for that purpose.

On December 14, 2016, Christie's sold one of the Smith 'Continental' presentation copies of the Principia for $ 3.7M from a lower estimate of $ 1M, lot 167. It is bound in its original unrestored morocco with gold and red inlays. The recipient is not identified.

It had been presented by Halley to King James II, patron of the Royal Society. The Royal bindings from that reign are extremely rare.
Fine Books 1700-1850