1919 Preparation for the Grandes Décorations by MONET

This piece is an oil of canvas 100 x 200 cm, a panoramic format used by the artist after he completed a barn-like studio for the specific purpose of doubling the size of his pictures. It looks like a culmination of the 1917-1919 phase. Monet did not part from it.

In conjunction with the complete removal of both shore and horizon, the large size of the flowers indeed brings the impression of a very close view of the pond. This immersion is enhanced by the reflections of green trees and blue sky in the interstices between the groups of floating plants.

​The emotion and the presence are brought by the arrangement of the increasingly vibrant colors while the topographic depiction becomes unnecessary. ​

Monet works primarily for himself. He had not given away any significant painting since 1912. In November 1919 he nevertheless accepts to sell to Bernheim-Jeune four Bassins aux nymphéas 100 x 200 cm. These finished works were especially prepared in the utmost quality.
​
One of these paintings is in the Metropolitan Museum. Another one was sold by Christie's on November 11, 1992 for $ 12M. The third was cut in half before 1944. The left side is in the Tel Aviv Museum. The right side was sold for $ 27M by Christie's on May 12, 2016.

An oil on canvas by Monet from the Bernheim-Jeune group of four was split into two equal parts 100 x 100 cm before 1944 by an unidentified fool.

From 1916 to 1918 in Montparnasse, Zborowski had sponsored the theme of the nude woman by Modigliani. The artist had a great delicacy and was not always at ease in front of his models. He succeeded to create an unprecedented new style, not overlooking the shyness of the girls.

Under the increasing pressure of the war, he leaves with Zbo in April 1918 for the Côte d'Azur. During their 13 months stay, life was not the same. Their clients were far away. Amedeo took a keen interest in the portraits of local children and teenagers, pictured frontally seated on a simple chair. He tried to reveal their individuality behind their clumsiness or boredom while being observed by the artist.

This new theme became a pretext to improve the features, in another new signature style. Bodies and necks became elongated and flexible. The background was made in light warm colors.

Often the eyes were completely filled in sky blue, without pupil, bringing an enigmatic gaze. This unprecedented feature was probably inspired by his earlier practice in sculpture beside his friend Brancusi, under the influence of African masks lit from behind. Some Montparnasse nudes had similarly filled eyes but slightly darker with a lesser empathy.

Jeune homme roux assis, oil on canvas 100 x 65 cm painted in 1919, is in the follow of the series of seated young people by Modigliani.

The handsome red haired guy between adolescence and a confident adulthood does not belong to the working class. The eyes are filled in cerulean blue.

1919 MODIGLIANI back in Paris
​Intro

Amedeo and Jeanne entered together into the legend. When they met in 1917, Amedeo was 33 years old and Jeanne was 19. She sacrifices her desire to become an artist and becomes the companion of the cursed painter, alcoholic, drug addict, consumptive and moreover a Jew in a society that was not tolerant.

​They came back from Nice to Paris in May 1919 with their baby Giovanna. Helped by Zborowski, he set up his studio rue de la Grande Chaumière. Peace had returned and a period of great creativity begins for the artist.

In 1919, Amedeo Modigliani is again able to reveal the ideal woman, as in the time of his sculpted heads of 1911 and 1912. Since he then had to give up sculpture because of his failing health, Amedeo is primarily a portrait painter. His models are the people around him in the art world of Montparnasse and humble fellows who cannot be his customers. His paintings are difficult to sell.

The sensual nudes painted in 1917 had brought a sinuous outline of the women's body. The harmony of rare warm colors provides comfort and kindness. The interpretation of that hypersensitive artist as a wild guy is definitely wrong.

The portraits of seated models at the Grande Chaumière are set up similarly with small variations in the position of the hands and the orientation of the head. The format of the canvas increases, close to life size.

The portraits by Amedeo of his intimates are recognizable but they are not realistic because they must represent an absolute. Small in life, Jeanne is tall for Amedeo. Her green eyes become intensely blue to express innocence and fidelity. The arms become more elongated with gestures that are altogether expressive and quiet and above all typically feminine.

When Amedeo Modigliani paints the portraits of his friends, he idealizes the forms which he can no longer express through the sculpture that has become too tiring for his fragile health. And the perfect line, the charming sinuosity, the elongation of bodies are not the rediscovery of mannerism but the direct extension of his inspiration as a sculptor.

Jeanne is his muse. He met this nice girl in 1917 when she was 19 years old. Madly in love, he shows an ideal Jeanne, as he would like her to be.

In 1919, when Amedeo paints Jeanne Hébuterne au chapeau, the young woman has already born him a daughter, also named Jeanne. This oil on canvas, 92 x 54 cm, is an invitation to communicate. The gesture is nice, the pastel-like background is discreet, the eye position is straightforward.

These eyes which are the strong point of the image are nearly uniformly blue, as if the face so alive elsewhere of the sitter was only a mask to a dreamlike sky. The ongoing process of Modigliani to the representation of the ideal woman has led to this ultimate detail that makes him, quite unexpectedly, a precursor of surrealism.

Jeanne devant une porte is a three quarter length portrait by Modigliani of Jeanne Hébuterne in 1919 while she was pregnant of their second child. The eyes are filled in blue and she wears the strict clothing of a young mother. ​Her attitude is sad.

This oil on canvas has an unusual large size for that series, 130 x 80 cm. This is one of the latest portraits of Jeanne and arguably the most poignant. The head is heavily bent to her left. A scientific analysis based on pictures and photos concluded in 2018 that the poor young woman was suffering of cervical dystomia.

On June 21, 2016, Sotheby's sold for £ 38.5M at lot 12 the portrait of Jeanne au foulard (with scarf), oil on canvas 92 x 54 cm painted by Amedeo in 1919. ​Please watch the video shared by Sotheby's (below).
​
The muse does not laugh : her mouth is again sulky, as in her other portraits. The specificity of this artwork is in the eyes drawn with visible pupils, increasing the emotional presence of the young woman just as if Amedeo had just decided to abandon his signature uniformly blue eyes. This painting could be one of the last portraits of Jeanne.

The greatest and most tragic #love story in #art history? #Modigliani's tribute to Jeanne https://t.co/Zyv622WeXg pic.twitter.com/uycU1vGQ5d

When Paulette Jourdain arrives at Montparnasse, she is a still a child at only 15 years old. She obtains to work for Zborowski. She is the last model of Amedeo in 1919. Her portrait, oil on canvas 100 x 65 cm, was sold for $ 43M by Sotheby's on November 4, 2015, lot 12T. Please watch the video shared by Sotheby's. The image is shared by WikiArt.

The search for expression is dominant over realism with two signature innovations in Amedeo's art : a tall neck creating a neat distance between head and body and the eyes completely filled in blue that announce surrealism and are certainly a proof of kindness of the artist for his model in the stiff attitude of a teenager. 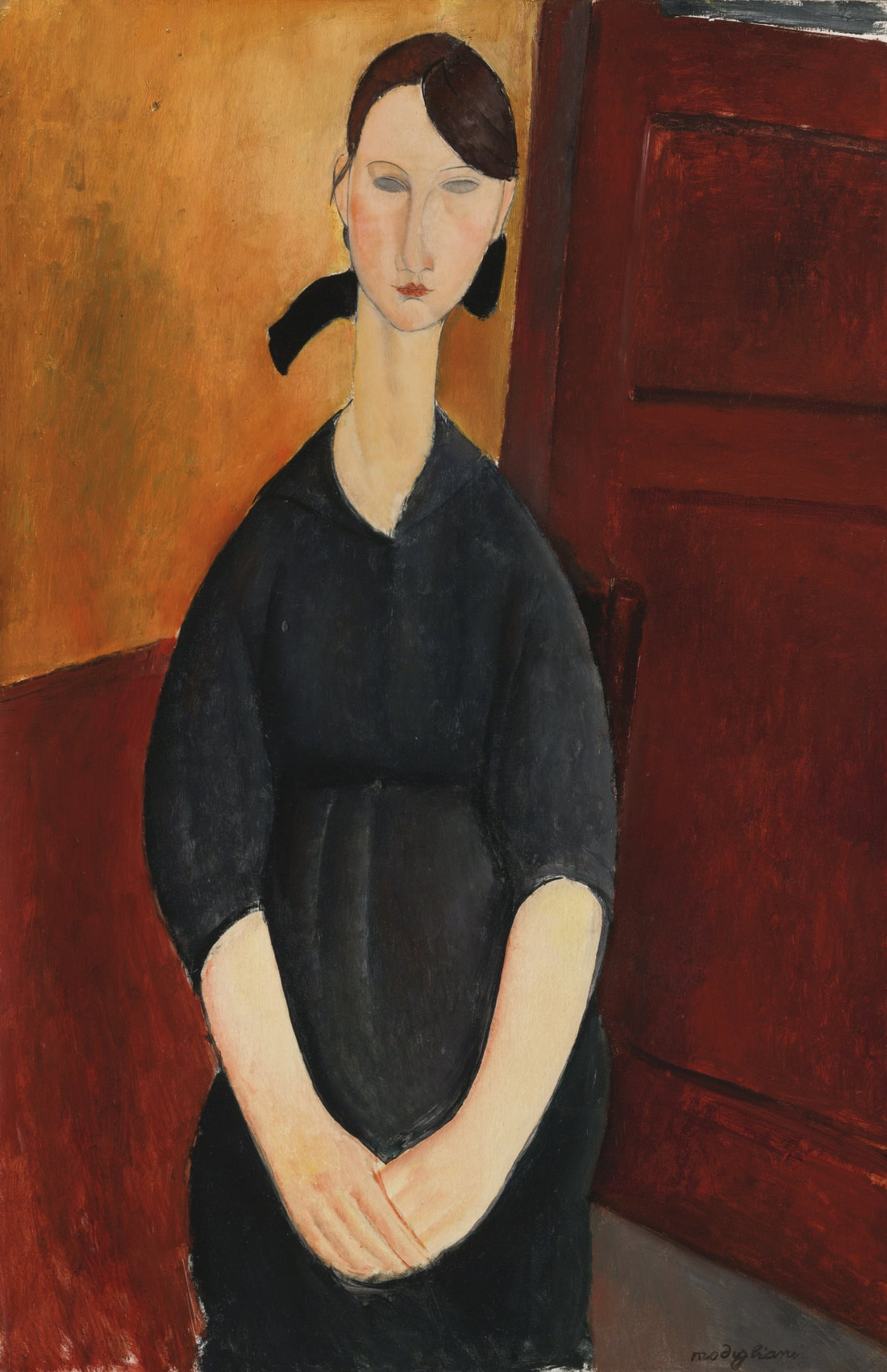 Guitar on a tabletop was a preferred theme of the Cubist pioneers, Gris, Picasso and Braque. In 1919 war is over and the synthetic phase of Cubism is giving way to the Neoclassicism.

Under the influence of Diaghilev's Ballets Russes, Picasso continues in both styles with dynamic pure colors, as demonstrated by a pair of portraits of Olga started simultaneously ca 1917 of which the Cubist version was sold for $ 30.5M by Christie's on May 15, 2017, lot 7 A.

Guitare sur une table painted by Picasso in 1919 in Paris is a mixed style in which the mandolin shaped instrument is displayed beside a sheet of staves in a flattened trompe l'oeil that includes a joyful blue sky through a window.

In 1919, Europe is just emerging from war. It is a difficult time for Matisse, his private life and his art. Before 1914, he had entered a new path, emphasizing the harmony of colors that will be the passion of his artist's life. He feels however marginalized by his rejection of abstraction and cubism.

On July 14, French national (Bastille) day, he unleashes his hopes on a canvas 116 x 89 cm. A bouquet springs from a vase in an explosion of colors that immediately calls to fireworks and mingles with the more neutral wallpaper background. The image of this painting is shared by BBC News.

The subject and composition are typical of the still lifes of the master. The patriotic inspiration and the joy of colors make it an exceptional painting, sold for $ 28.6M from a lower estimate of $ 18M by Sotheby's on May 5, 2010.
Flowers
Bouquet
Matisse
1920