In the early 1860s Monet, Bazille, Sisley and Renoir were students at the Ecole des Beaux-Arts in Gleyre's studio. To escape academism they take their easels for painting outdoors in the forest of Fontainebleau.

After the Franco-Prussian war in which they loose Bazille, the young men resume their experiences. The drawing in the style of Manet remains preponderant for the figurative while the details of the greenery are lost in a brilliantly colored fragmentation.

The Salon is increasingly reluctant to this trend that escapes the official good taste. In December 1873 the three friends joined by Pissarro, Degas and Prins create a cooperative society to find a clientele. For their first exhibition in the following year, they rent for one month the workshop of Nadar. With Berthe Morisot, Cézanne, Guillaumin and Rouart among others, they will be forced to accept the pejorative sobriquet of Impressionnistes.

This sous-bois is composed of a multicolored pattern spotted with shadows and lights and dotted with some realistic details. The perspective effect is assured by the path that goes straight to infinity, punctuated in mid distance by a tiny character who symbolises the human place within the immensity of nature.

In the typical style of the first three Impressionist exhibitions, this undated artwork was certainly painted between 1874 and 1877. It was located by Dauberville in the forest of Fontainebleau.

​It looks like a horizontal counterpart to the Sentier dans le bois that was sold for £ 12.7M in 2019, with the same effect of light and shadow in a similar perspective. Despite its title Femmes dans un jardin, the two far away silhouettes in the shadow are almost canceled within the impressionist brushstroke.

In 1863 Charles Gleyre admonishes Monet because he does not follow the model of the antique. Bringing with him three friends, Sisley, Renoir and Bazille, Monet slams the door and manages to paint outdoors.

Their temperaments are different. They are young and tempted by the good life of dancing balls. While Monet is overtaken by his wife, Renoir expresses the carefree joie de vivre of the groups to which he applies the impressionist style. Le Bal du Moulin de la Galette in 1876 and Le Déjeuner des Canotiers, exhibited in 1882, are among the most important masterpieces of painting.

Renoir painted two identical versions of the Moulin de la Galette. The largest, 131 x 175 cm, became the property of the French State through the Caillebotte bequest and is currently at the Musée d'Orsay.

The other version is an oil on canvas 78 x 114 cm damaged by folding. Coming from the Whitney collection, it was sold for $ 78M by Sotheby's on May 17, 1990. The image is shared by Wikimedia.

The buyer was a Japanese collector named Ryoei Saito, who had acquired the Portrait of Dr Gachet by Van Gogh two days earlier at Christies for $ 82M. Saito creates some terror in the art world by announcing that at his death he will be cremated with the two paintings to avoid that enormous inheritance rights are required to his heirs.

Saito died in 1996. His threat was not carried out because his wealth had turned down and the artworks were sequestered by his creditors, but the two paintings were never seen again. The Van Gogh was reportedly located in 2007 in the collection of an Austrian financier who has since gone bankrupt. 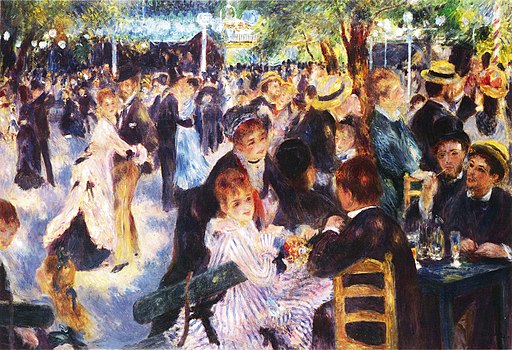 The woman is quietly sitting alone in the garden. She holds an elegant ombrelle (parasol) that protects her from the sun.

The garden of Renoir vibrates of many colors to such an extent that we do not even notice that the flowers were not drawn. The impression is due to the texture, so anticipating also the art of Van Gogh and Klimt. Monet had opened the way with his grassy slopes of Argenteuil.

Renoir, aged 37, is at the best of his creativity. Two years before, he had painted the Bal du Moulin de la Galette whose sharp drawing looks closer to Manet, and which was sold $ 78M by Sotheby's on May 17, 1990.

The style of the Femme à l'ombrelle is rather in the following of another of his masterpieces of 1876, the Swing (in the Musée d'Orsay), where the sunspots filtered through the undergrowth are added to the mystery of the garden.

In a comparable Impressionist style, an oil on canvas painted in 1881 by Berthe Morisot was sold for £ 7M in the same 2013 sale.

From the mid 1870s, Renoir brings a high care to the execution of his paintings, including his masterpiece Le Déjeuner des Canotiers in 1880-1881. In the faces, a realistic delineation supersedes the impressionist strokes, still applied in the surroundings.

Monsieur and Madame Clapisson are wealthy rentiers, 46 and 33 years old. In 1882 Monsieur begins collecting art. He invites Renoir to make a portrait of his wife in the garden of their Neuilly mansion.

This oil on canvas 100 x 81 cm features Valentine Clapisson taking tea, seated on a bench amidst the roses, with a verdant background. Renoir reminded afterward that he had a real pleasure painting this charming and quiet figure, gently smiling to the artist. An umbrella beside her confirms the sunny weather.

In a current view, it is one of the best portrait paintings by Renoir. In period the husband considered its bright colors as daring and rejected it. Renoir kept it for some time under a title that would not shock the bourgeois. It was later known with a better title, Dans les roses. He made another portrait which was accepted by the jealous husband.

After 1883, Renoir is looking for a new path. Impressionism is no longer suitable to him. The scenes of modern life that had made ​​him so successful are no more decorative enough for his taste. Wanting a more sustainable art, he loses the references of clothing by undressing the young women and seeks to emulate Ingres.

Renoir exhibits his new style in 1887 with Les Grandes Baigneuses, oil on canvas 115 x 170 cm. The composition is neat, with a good balance between these happy women. The contours of their nude forms are a rejection of Impressionism by one of its main initiators. Failure is scathing.

On May 6, 2014, Christie's sold for $ 11.4M an oil on canvas 55 x 65 cm from the same period, lot 10, which illustrates the same desire of the artist to radically change his style. His work is done at that time in the studio, even for outdoor scenes.

In a meadow, five young women are playing rackets. They are dressed, but their attentive communication is similar to the Grandes Baigneuses. The figures are defined in sharp lines, leaving a reminder of impressionism only in the atmosphere of the surroundings.
1887

Not so easy, the artist's life ! After the early period of enthusiasm, the Impressionists began to look for adapting their style to what they thought they could sell. Renoir certainly considered the commercial effectiveness of the nude figures by Bouguereau.

His Grandes Baigneuses painting is exhibited in Paris in 1887. The line is too sharp, imitating Ingres and puzzling the friends of the artist who were probably expecting a more original evolution. They were right.

The considerable work done by Renoir for this questioned painting had a fundamental impact on his art : now, the artist is passionate about the theme of the everlasting beauty, inspired from classical antiquity and from Botticelli's Nascita di Venere.

Jeune Femme se baignant, oil on canvas 81 x 65 cm painted in 1888, is an example of the idealized woman, rivaling the voluptuous women by Fragonard and Boucher. The fully grown red haired woman is full front standing with the water of the pond up to her knees. The warm tone of the flesh, the closed eyes and the finger in modesty while the other hand is catching the long wet hair are providing an expression of sweetness. 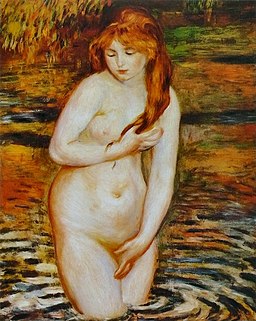 The young woman is nude after a bath, quiet, gesturing toilet. No other accessory than a small towel, in an unimportant outdoor setting. She is the ideal woman, timeless.

In the later 1880s the Baigneuses period had been a restart in the art of Renoir. Now the ideal young woman must be on earth, not in a pantheon. He makes portraits of anonymous young sitters in fresh attitudes, which are characterized by the quality of the pink texture of the skin in an appealing childish face and a soft light.

Jeune Fille à la Corbeille de Fleurs, oil on canvas 81 x 65 cm, is a masterpiece of that new period and the most expensive work that Durand-Ruel acquired from Renoir in the full year 1890. Two oil studies in the same format for that finished painting were also bought by Durand-Ruel.

The well dressed girl with a growing breast is slightly bending her head for engaging her charming gaze and smile with the viewer. The pose is inspired from Ingres's Portrait de Madame Rivière.

Berthe Morisot maintained in her home closed social links with the Impressionist artists and the avant-garde poets. She had married in 1874 Eugène, the younger brother of Edouard Manet. Their daughter Julie was born in 1878.

In the late 1880s she developed a mutual artistic influence with Pierre-Auguste Renoir who made in 1887 a portrait of the child Julie Manet with a round face. Renoir took Julie again as a sitter in 1894. After a few sessions, he convinced Berthe to sit also for an intimate portrait with her beloved daughter.

The gray haired widowed mother in a black mourning dress is relaxing in a chair. She looks tired although her final illness will only happen a few months later. The lovely dark haired teenager is standing behind her with a pensive smile and a large white hat. The highly realistic face of Julie may be compared with photos of her in that period.

As requested in Berthe's will, the kind and sincerely emotive Renoir became Julie's unofficial guardian after her death. Julie married in 1900 Ernest Rouart whose family owned the double portrait until the 2000 auction.