US Stamps (before the Inverted Jenny)

Except otherwise stated, all results below include the premium.
​not including pre-US Hawaii
​See also : Stamps

In 1847 the first two stamps of the United States are issued. The 5 c is the portrait of Franklin and the 10 c of Washington.

On September 26, 1848 in Philadelphia, Benjamin Rush prepares a letter for his father, the US ambassador to France. The instructions for transportation require to use the Europa, a British steamer of the Cunard, in her September 27 Transatlantic travel. The payment in US stamps is by-passing the protectionist British mail rules.

The Europa reached Liverpool on October 9. The letter was carried by rail to London and Dover, crossing the Channel to Boulogne, and by rail to Paris where it was delivered on October 11.

The Rush cover is inscribed with Benjamin Rush's manuscript inscriptions and with the stamped records of all steps of the transfer. It is bearing a horizontal row of six 10 c stamps, one of them being in another variant than the other five. The total 60 c were overpaying the 58 c US 'Retaliatory' rate for a letter over the half ounce limit. The addressee had to pay a fee of 33 French décimes on delivery.

The grilled stamps were a regular variant used by the US Postage from 1867 to 1870. The purpose was to indent the stamp to discourage the washing out of the cancellation ink. The types of grills are identified by letters which are not related to their pattern of points.

The first tests are carried out with the A Grill in 1867. They are promising, but the A Grill covers the entire surface of the stamp, which reduces the production yield due to an excessive mechanical stress.

Released in January 1868, the Z Grill had the only design with horizontal ridges. It was obsoleted in mid February. It is not uncommon for some stamp values ​​but is very rare for 1 cent, 10 cents and 15 cents, certainly for reasons of production sequence.

The 1 cent Z Grill is known in two examples only. One of them is kept at the New York Public Library.

The unique example in private hands was sold for $ 940K by Robert A. Siegel on October, 8, 1998, lot 226. It was purchased at that auction by a stamp dealer who traded it in 2006 to the collector Bill Gross against the top star of US philately, the plate block of the Inverted Jenny. Gross had desired the Z Grill for completing his collection of US stamps.

The image is shared by Wikimedia. 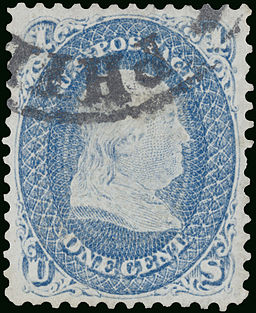 The B Grill is an experimental or involuntary aberration. Used in 1868 during the phase of removal of the A Grill, it was too large against the new specified standard that was the F Grill.

The four known stamps with a B Grill are 3 cents. They were circulated on a single cover in February 1869 and discovered in 1969. They have been detached later. All of them are centered to upper left and have a natural straight right edge.

In 1869, the United States renew their postage stamps. Ten values ​​are released, from 1c to 90c, but only three of them maintain the tradition of featuring the heads of the great statesmen of the past. The other seven display scenes and symbols of American patriotism.

Another innovation is technical. Four of these values ​​are printed in two colors, the first step towards the modern polychromatic stamp: 15c, 24c, 30c and 90c Lincoln.

The printing is done in two stages. When the sheet is presented in reverse to its second pass, the two elements of the image are one another inverted. This error of image position did not prevent the stamps to be used.

The controls were not strict enough. Similar errors of the 1901 Pan American issue were certainly better filtered, and only a single sheet escaped the controls of the 1918 Air Post.

Survivors of uncirculated Pictorial inverts are very rare : their total for the three usual values ​​is estimated at 14 units. On February 9, 2008, Philip Weiss sold for $ 1.27M one of the four 24c, sound but unevenly centered and without gum. It is illustrated in the post sale report shared by Antiques and the Arts.

The Grant administration, which has made ​​this release, had reluctantly inherited this project from Johnson and did nothing to promote it to the users. After a few months, the traditional figuration returned to the US stamp, explaining the scarcity of the Pictorial issue and of its errors.

On October 9, 2013, Robert A. Siegel sold the finest known inverted example of the two other usual 1869 values. Each one is the only specimen in its category to have retained its original gum.

The 1876 Centennial was indeed the most important industrial exhibition in 19th century USA, taken in the utmost seriousness by all participants.

For the Centennial the US Postage prepared in 1875 sets of stamps that could showcase their history while realizing a superior impression on a thicker and whiter paper. Four categories were defined. Reproductions and Reprints were applicable to the earliest types that were no more valid for postage. Re-issues applied to the Series of 1861-1866 and for the 1869 Pictorial, both still accepted for circulation, and Special Reprints for the types under current production.

Alfred H. Caspary formed a set of unused blocks of four from the 1875 Re-issues of 1861. They were purchased from eight lots as a group at the auction of his deceased estate in 1956. The 3c, 5c, 10c, 12c, 24c and 30c blocks are unique. Only one other block is recorded for the 2c and another 15c block has not been confirmed. The 90c is not known in block form.

Blocks are especially popular with philatelists. Interviewed by Robert A. Siegel Auction Galleries, the collector Alan Whitman explains why : Once separated, a block is lost forever for philatelists, who are therefore proud to contribute to their preservation.

It is difficult to identify if it is really an error or an unauthorized test conducted by a manager of the United States Post Office Department.

In 1908 the US government released new packages for selling stamps through automated vending machines. The stamps were cut from the sheets in a single stripe of 20, in a row with top and low edges unperforated, or in a column with side edges unperforated. The coils were pasted together in rolls of 500 or 1,000 stamps.

This new process was most effective than the rolls available from the previous year in the UK, where the coils were cut from fully perforated sheets and then trimmed.

The very first application was on the Series of 1902 which were terminated at the end of 1908. The coil stamps of these variants had thus been made in a very short period. It was applied to three denominations only, 1c, 2c and 5c, excluding the eleven rarer values.