​Anton Peschka and his younger fellow Egon Schiele were students at the Akademie des Bildenden Künste Wien. Nevertheless Schiele is a rebel. Leaving that ultra-conservative Academy at 19 year old in 1909, he endeavors to promote a new art by founding a Neukunstgruppe under the benevolent influence of Klimt.

Portrait des Malers Anton Peschka was executed by Schiele in that key year in oil and metal paint on a nearly square canvas 110 x 100 cm.

The style is decidedly expressionist. In a bold composition, the sitter is represented in profile in a large armchair. Neutral tones in gray and brown surround the sharpness of the head. The texture of the chair is made of small colored blocks, possibly in imitation of Klimt. 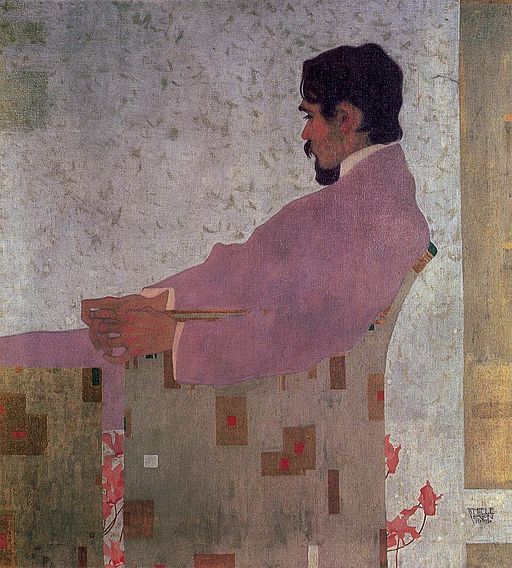 Once out of this ordeal, Schiele feels the need to change air. In May he spends a few days in Trieste, a place he loved, in the pleasant atmosphere of the fishing port.

On a square format 70 x 70 cm, the composition is symmetrical and flat. The boat is seen from the front, in a rather naive drawing and without perspective. The colors are rich and saturated, in the morbid style that Schiele had already practiced.

The perspective is nevertheless present by the water that deviates in front of the boat as if she was rushing onto the observer. At the foreground of the boat two anchor points increase the threat of this subject that could have been peaceful. Black in a bright red orbit, they are on both sides of the main axis like the intimidating taotie of the Chinese liturgical bronzes.

The logical continuation of Triestiner Fischerboot is the series of haunted cityscapes of Krumau in which no human presence is needed to express the artist's feelings. Until 1912 Schiele could have become a cursed artist. This is not the case : fame comes to him as early as 1913 with his first solo exhibition.

#AuctionUpdate We’re sailing away with Egon Schiele’s uniquely modernist depiction of a fishing boat in Trieste. Offered at auction for the first time, this square-format painting brings £10.7 million #SothebysImpMod pic.twitter.com/F0CVexb5uK

ly explThe 24 days spent in prison in 1912 by Egon Schiele after an exhibition of sexually explicit drawings exacerbated his own mysticism. Concerned that the deep roots of his art were fully misunderstood by everybody, he went to charge religion and bourgeois in an implacable expressionist style that anticipates by a few years Grosz and Dix.

In 1912 a post imprisonment works features a red dressed cardinal and a black dressed young nun kneeling in bare legs for a carnal embrace.

They are indeed a self portrait of the artist with Wally. Around the same time Egon starts associating him with the Christian martyrs by representing himself as a tonsured monk in ecstasy with an emaciated face.

Painted in 1913, Selbstbildnis mit Modell is another double figure of Egon and Wally. They are physically separated and do not look at one another. An elongated arm of the man is reaching the waiting woman in an intention of communion whose ritual can only be understood by the artist.

Conceived as a 70 x 240 cm fragment for a monumental frieze that would highlight the prophet artist as a supreme guru and his muse as the first converted, this oil on canvas somehow reminds the monastic frescoes of the Renaissance. It was sold for $ 11.3M from a lower estimate of $ 5M by Christie's on May 8, 2013, lot 37. The frieze was not executed.

The nervous lines in the bodies of Schiele's young mistresses announce their future decay but they remain alive. This anguished artist must find a means for expressing the mortality. From 1912 he uses as another theme the small town of Krumau in southern Bohemia where his mother was born.

Krumau is a medieval town incompatible with the modernist and socially advanced trends of the artist. It is his Tote Stadt, even more morbid in his memories and imagination, with no attempt for an accurate topographical representation. Autumn adds its decrepitude.

The panorama is seen from above, an angle of view that Schiele liked also in his portraits. The houses are in close ranks, schematized like on an engraving of the Renaissance. Much later, this vestige of ancient times will be listed in the World Heritage list of the UNESCO. The river that flows in the foreground or away is the Moldau.

Painted in 1913, this opus also titled Dämmernde Stadt (city in twilight) is made in a restrained palette of rich dark tones with a few lit windows. It is one of the earliest paintings in the expressionist series of Krumau townscapes. A square format for the landscapes had been previously practiced by Klimt.

Some relation with the neo-Gothic art of his time may be considered.
1913

It may happen that bright splashes of color give a hope of happiness to the dreary cityscapes of Egon Schiele.

In front of an insignificant landscape structured in horizontal lines, the big house is the main character. Its gloomy texture announces an upcoming decay. It rises like a towering and outdated inquisitor in the middle of the scenery. It has already lost any trace of life.

Krumauer Landschaft, subtitled Stadt und Fluss, oil, tempera and colored chalk on canvas 110 x 140 cm painted in 1916 by Egon Schiele, was sold for £ 12.7M from a lower estimate of £ 5M by Sotheby's on June 23, 2003, lot 6, after being restituted from a Nazi looting. The image is shared by Wikimedia.

Egon Schiele was a hypersensitive artist obsessed by a presence of death within life and by the concept of an eternal vitality despite the decay. Another melancholic crisis happened in 1913, looking for where his late father could have been. The father had died nine years earlier while the boy was 14.

Schiele used to paint landscapes by memory, not by a direct observation, as it is also evidenced in his Krumau cityscapes. Herbstsonne, so titled by the artist, was not made in an autumn but in March 1914. Also its sunflowers do not turn towards the sun as they do in nature.

This oil on canvas 100 x 120 cm displays a sunset through a topless and bottomless column of sunflowers. The sun has the pale hue of autumn in a chilled banded sky. The fall is indeed a promise of wilting for sunflowers while the leaves are drying.

The melancholy suffered at that time by the artist is sufficient to appreciate that theme without referring to some prophecy of the apocalypse of Europe in the world war. The sunflower had been an anthropomorphic symbol for Schiele from his early artistic maturity. The deadly Herbstsonne was his ultimate oil painting on that theme.

Herbstsonne was considered as irremediably lost after being confiscated by the Nazis in 1942. Restituted to the heirs of its spoliated owner 64 years later, it was sold for £ 11.8M from a lower estimate of £ 4M by Christie's on June 20, 2006, lot 7.

The world seen by Egon Schiele is unbearable, but the young man is trying to communicate. People are ugly. He shows his own ugliness in his many self-portraits. Life is probably meaningless : the art of Schiele has no limits, nor in provocation, or in derision, or in obscenity.

I do not know if another artist went as far as Schiele to show himself so unfriendly. He does not smile. The twisting of his body creates discomfort. His eyes, straight or angled, are too incisive for his communication to enable a response.

His muse Wally is also shown as an ageless figure. However, when they met in 1911, she was only 17 years old.

Schiele was also complicated and tormented within his private life. In 1915, he announces to Wally that he wants to marry, but especially not with her. Furious, she leaves. He then executes one of his most dramatic paintings, Death and the Maiden. The bending Death presses the kneeling girl. The stature of Egon and the face of Wally are recognizable in these two characters.

A drawing in gouache, watercolor and pencil sold for £ 7.9M from a lower estimate of £ 6.5M by Sotheby's on February 5, 2013 shows a similar scene. Wally, at mid-body, is by evidence standing on her knees, embracing the belt of her standing lover. This work is clearly identified as a self-portrait. Egon looks at Wally. The eyes of the young woman are distraught.

Please watch the video shared by Sotheby's, featuring the three Schiele drawings listed in that sale :

Egon Schiele would like to be the pioneer of a new art expressing the deepest of human nature that he observes without complacency up to pornography and self-derision. The self portrait is his ultimate art.

The expression is an expectation, in contradiction with the head fully tilted on a shoulder as if he desired to perform some mannered absurdity from real life. The right hand is raised.

This piece has the characteristic spontaneity of a drawing without retraced lines. The checkered shirt and the skin are enhanced by bright colors. In contrast the torso is left blank.
1917