After the 1992 season McLaren's supremacy is threatened : they lost their winning engine due to Honda's withdrawal from Formula One. They find a compromise with Ford Cosworth for 1993 but that does not satisfy anyone. Ford is in contract with Benetton to whom they reserve their best technological developments, and the Ford V8 is significantly less powerful than the Renault engine of the Williams.

The reference of the new McLaren with a Ford engine is MP4/8(A). Ayrton Senna has doubts but eventually agrees to stay with McLaren. He wins two of the first five Grand Prix including a stellar victory at Donington Park.

For the sixth Grand Prix of the season in Monaco, the MP4/8 number 6 is attributed to Senna. He knows this difficult circuit where he previously won five times, sharing the prestigious record of Graham Hill.

McLaren no longer has the best car but the skill of its development team to exploit to the extreme the tolerances of the regulations, combined with Senna's legendary motivation, makes it possible to compete with Williams.

During the free practice the McLaren spins at 160 km/h. Senna is safe thanks to the secure design of the McLaren cockpit. The accident was generated by an error in an automatic instruction within the new active suspension. At such a high level, driving is a continuous re-learning even for a pilot as experienced as Senna.

Senna knew to comment on his psychic states. He was very scared. The accident took place on Thursday. Senna continues with the same car that has not been damaged. On Sunday he had mentally integrated the consequences of the accident and wins for the sixth time in his career the Monaco Grand Prix.

He drives the car in six further Grand Prix but without a win. Alain Prost is the 1993 world champion with Williams-Renault.

The MP4/8A-6 has remained authentic including the engine and gearbox of its victory in Monaco. It returned to the Principauté on May 11, 2018 with Bonhams, lot 119. It was sold for € 4.2M.

The image of this car driven by Senna at Hockenheim is shared by Wikimedia with attribution : By Runmatze~commonswiki / Landmensch [GFDL (http://www.gnu.org/copyleft/fdl.html) or CC-BY-SA-3.0 (http://creativecommons.org/licenses/by-sa/3.0/)], from Wikimedia Commons 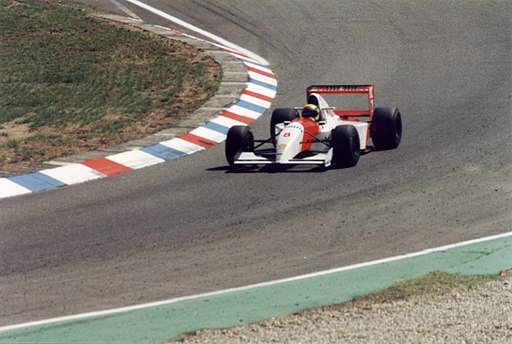 The McLaren F1 is the result of a brainstorming between the managers of the group in 1988. In that year their dominance over Formula One is total : Senna and Prost win 15 of the 16 Grands Prix.

Technical director since 1987, Gordon Murray convinces his bosses to develop the most powerful, most comfortable and most elegant grand touring car of all time. The model is named F1 for announcing that the same care should be taken in the design and manufacture of this coupe as for a Formula One car.

The first prototype is unveiled in Monaco in 1992. The F1 had the great merit to start the commercial production of supercars after the dark years of the oil crisis. Nearly fifteen years after the series was terminated with its 106th unit in 1998, it was still the fastest model of road cars.

The F1 is the first production car with a carbon fiber monocoque chassis. The cockpit offers an exceptional visibility in the driving position with a central pilot seat and two lateral seats slightly behind for the passengers.

As for the great berlinettas and coupes made by Ferrari and Ford in the 1960s, the shape of the bodywork is superb. For the first time probably in the history of the automobile, some of the original owners maintained their car as if it were a work of art, anticipating the passion for supercars led ten years later by the Bugatti Veyron.

The McLaren F1 was acclaimed in due course as a sensational breakthrough in automotive history, both technically and aesthetically. In 1995 a private Japanese collector purchased an F1 for keeping it forever in museum condition out of public view. His car with chassis number 029 had been the last one assembled in 1994 and is titled 1995.

029 has been carefully maintained and serviced like any road going car while being driven for about 300 km only in Japan, most of it cumulated during a promotional filming session. The first owner parted from it after 17 years. The same care was applied by a subsequent long term owner in the USA who added less than 100 km on the odometer when making it US emission compliant.

The car is in pristine condition with a wide set of factory supplied tooling, documentation, and spares even including flashlight. It is preserving its one-off original color scheme of brown hues and its original 1994 Goodyear Eagle tires that had been specially designed for the F1. It is accompanied by the few equipment that were changed in 2014 for making it US legal. While not driven afterward, it was regularly maintained with fluid changes.

It was sold for $ 20.5M from a lower estimate of $ 15M by Gooding on August 13, 2021, lot 29. It is indeed a perfectly preserved example of the best road car model of the later 20th century. It is illustrated in the pre sale press release. Please watch the video shared by the auction house.
Cars - 2nd page
British Cars
Supercars

The F1 is the best but the security rules are not the same in America. The central position of the driver is tolerated but the side seats for the passengers are not allowed. Other differences include bumper height, headlights and cooling system. A company named Ameritech makes the changes necessary for the legalization in a way that can be easily and completely reversible. 7 F1 are processed by them around 1997.

It is announced as a dream car, consigned by its first owner with only 15,500 Km from new and an excellent history of services, in its original configuration without any further option. With a population of 64 in its basic version the McLaren F1 is however less rare than the Ferrari 250 GTO. Please watch the video shared by the auction house.
1995

The racing car was a logical development for the F1. The F1 GTR was released in 1995. The F1 road car was far ahead of its time, but on track the competition was rude with Porsche and Mercedes-Benz. In 1997, the chassis is changed. The F1 GTR Longtail, produced in ten units, is the ultimate competition model in this series.

On August 17, 2012, Bonhams offered at lot 459 the last of the 28 F1 made for racing, chassis 028R. It was unsold in the saleroom but a post sale transaction at $ 3.85M was announced. Identified as a 1997 McLaren F1 GTR Longtail, it is equipped with the ultimate improvement : a lengthening of the rear body.

The F1 GT was created to demonstrate to the boards regulating the competitions that the concepts of GTR were consistent with the features of a grand tourer. It was not proposed in the commercial catalog but after the completion of the prototype two F1 chassis were upgraded to F1 GT on special orders from private clients.

The F1 LM is a lighter version of the F1 GTR. It was built in 1995 as one prototype and five units. The engine of the GTR is reused but without the power restrictions required for the competitions. Aerodynamics are modified to maintain the stability, including the installation of a rear wing and the modification of the nose. Without exceeding the top speed of the GTR, the LM has a sensational acceleration, reaching 160 km/h in less than 6 seconds.

In 1998 the F1 series is going to its close out. The engineers from McLaren Special Operations are responsible for producing the most exciting car of this so successful series, somehow the ultimate F1 with all possible improvements, the best supercar of its time.

The 63th and penultimate F1 street legal chassis is equipped altogether with an engine meeting the LM specification and with the comfort provided to the wealthy clients of the GT. Aware of creating a masterpiece of contemporary automobile, Murray signed it on the transmission tunnel.

To keep cars in perfect condition and please the customers, McLaren creates a division in charge of service and of bespoke customization, which will much later become McLaren Special Operations.

In 1998 the penultimate road car was specially followed in production. When it is finished, the customer leaves it at the factory for having it upgraded to the LM specification. It was sold by RM Sotheby's in 2015.

The second owner of an F1 made in 1994 requires a similar modification. Transformed in two rounds in 2000 and 2001, this second and last F1 upgraded to F1 LM specification benefits from the latest developments and can be considered as the ultimate achievement of the best model of its time.

The Vodafone McLaren Mercedes team of the 2010 Formula One season was made of the last two outgoing champions. In 2008 in the same team, Lewis Hamilton had been at 23 the youngest ever world champion. Jenson Button joined McLaren after his 2009 season with Ross Brawn who had succeeded to the Honda factory team.

The McLaren model used throughout the 2010 season was referenced MP4-25 and used a Mercedes-Benz engine. The chassis is made of carbon fiber molded into a honeycomb.

Both drivers raced all the 19 Grands Prix of the season. Escaping McLaren, the driver's title was won by Sebastian Vettel on Red Bull Renault. Red Bull won the constructor's championship.

The chassis MP4-25A-01 was raced with no crash or accident in eight 2010 Grands Prix, three with Hamilton and five with Button. Hamilton led it to a wheel to wheel battle with Schumacher in China and to a win in Turkey. As usual with that range of vehicles, the MP4-25 was retired after a single season.

This car was sold for £ 4.8M from a lower estimate of £ 3.6M in a single lot auction by RM Sotheby's at Silverstone on July 17, 2021, onsite between qualifying and race of  the British Grand Prix. Please watch the video shared by Sotheby's.
Hypercars

The F1, produced from 1992 to 1998, was in its time the only road car in McLaren's catalog. Times have changed a lot : in 2021 the brand is offering no less than nine models to hypercar enthusiasts.

Technology has also changed. The Speedtail, unveiled in 2018, is a continuation of the F1 by the originality of its three-seater cockpit with central driver position, but it uses the hybrid propulsion that McLaren had pioneered with the P1 model in 2013.

The Speedtail is the brand's most performing model, with a guaranteed top speed of 403 km/h and an acceleration to reach 300 km/h in 12.8 seconds. In a demonstration race one year ago, a Speedtail tied with a flying Jet F-35 on takeoff. It is true that the fighter plane was not favored by the two turns of the triangular course.

In this quest for record speed, McLaren appears to be the only manufacturer able to compete with the top-of-the-range models from Koenigsegg, Bugatti and Hennessey. By comparison, the LaFerrari's speed is 350 km/h.

According to the manufacturer's new wording, the Speedtail is a Hyper GT. The teardrop bodywork allows a large glazed space. Carbon fiber is widely used. At 1,430 kg empty, this 5.13 m long monocoque car is light in its category.

The production was limited to 106 units, a cool reference to its ancestor the F1 which had reached this figure. Its sale price excluding options was £ 1.6M before tax.

The arrival at auction of a brand new car is an exceptional opportunity for enthusiasts excluded from McLaren's pre-selection. This car produced in 2020 was sold for $ 3.3M on January 22, 2021 by RM Sotheby's, lot 175.