Boccioni had wanted a global art with a figuration blurred within many facets. Kandinsky, Léger and a little later Mondrian were still exploring the boundaries between figurative and emotional. Malevich is unquestionably the first to purify art by freeing it from any interpretation of subject or object.

The second exhibition of his group, from mid-December 1915 to mid-January 1916, includes his Black Square on White Background, the first great shock from this new art. Malevich's aim is aesthetic. He finds for this new approach the designation of Suprematism.

The Black Square is his first flagship but it is not enough. The emotion must not be brought only by the freedom of the elements but also by the colors. Painted in 1915, the 18th Composition is a stack of almost rectangular non-transparent shapes in various colors. This artwork already invites to rotate the canvas for an observation in the four possible orientations. It was sold for £ 21.5M including premium by Sotheby's on June 24, 2015.

I described and commented it as follows in 2008:

The painting for sale no longer produces an illusion : it is a composition based on about fifty colored beams spread over a white background. The size, the proportions and the colors are varied. The angular positions show an opposition between the big purple beam and most of the others.

Malevich has succeeded here in his approach to an art that completely escapes nature and feeling, to retain only the aesthetics of color and geometry. He wanted his art to be understandable in the same way in all countries.

Please watch the video shared by Christie's. The image is shared by Wikimedia. 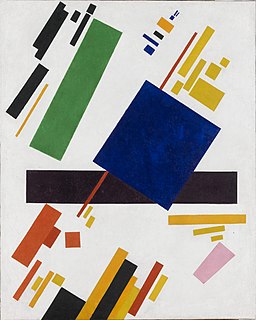 Wu Changshuo had been ruined by the civil wars of the later Qing. This artist might have been the last of the great imperial literati but had to be content with a minor job in the administration, which certainly helped him to continue working under the new regime.

Through his original training as a seal engraver, Wu understood the importance of allowing a free movement to his hand. He specializes in images of plants, with a brushstroke inspired by the emotional art of the calligrapher. He likes to express the density of the foliage. His spontaneity made him compared to Bada Shanren, the great non-conforming artist of the early Qing.

Wu innovated by the simplicity and liveliness of the line and by the use of bright colors. When Qi Baishi moved to Beijing in 1917, Wu encouraged him to modernize the Chinese pictorial art forever.

On December 17, 2017, Poly sold for RMB 210M including premium a set of twelve screens 133 x 53 cm each painted in black ink by Wu Changshuo in 1915-1916, lot 2638. This plant anthology includes peony, narcissus, pomegranate, lotus, pine, plum, bamboo, chrysanthemum, orchid, wisteria, cabbage and one that my source forgot to list, each with a text or a poem.

All of them are  illustrated as the second entry in the article shared by The Value after this very important sale, alongside the twelve landscapes by Qi Baishi sold for RMB 930M including premium.

It is illusory to represent a volume on a canvas or on a photograph. Klimt takes this into account in his paintings, whatever the subject.

He does not work from a photo, but his removal of the perspective seems to be independent of Cézanne's deconstructions. He finds textures and geometric elements in the landscape, using a viewfinder made up of a hole in a cardboard. Later a friend will give him an ivory eyeglass.

After choosing his elements, Klimt reassembles them in square formats. His villages can be compared to the accumulations of houses in Krumau by Schiele. Both artists thus obtain a personification of the buildings in their compositions with no characters. Their final effect, however, is in opposition. Schiele wants to annihilate his haunted city but Klimt is on holidays : his colors are happy.

Klimt spends every summer at the residence of Emilie's family in Litzlberg on the Attersee. Unterach is a very picturesque village at the other end of the lake. To avoid any temptation of perspective and horizon, the artist takes his view with a telescope from the other side of the lake. 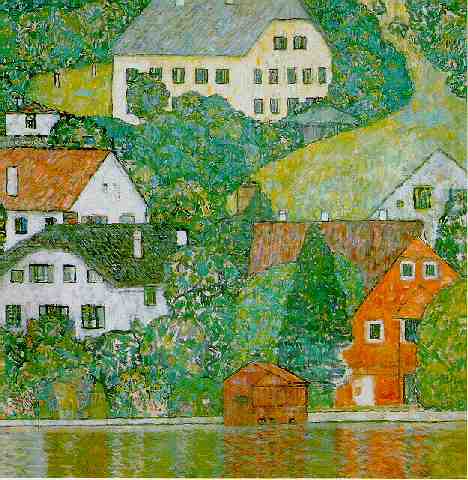 Amedeo Modigliani reluctantly stopped practicing sculpture due to poor health in 1914. Looking for self destruction in alcohol and drugs, he restarted painting on the recommendation of the poet Max Jacob and of the art dealer Paul Guillaume. He then painted portraits heads of Montparnasse artists, poets, actors, patrons and demi mondaines in a simplified drawing and rich colors.

Madame Dorival was the wife of an actor. In her portrait by Modigliani, the shape of the head and the elongated neck are directly in the follow of the 1911-1912 stone busts. The eyes are nearly closed without a visible pupil. The head is tilted to her right and the sensuous lips are bright red.

The art dealer Paul Guillaume represented Modigliani from 1914 to 1916, although they did not contract. Guillaume was also an early self taught authority in the African tribal art whose purified forms had highly influenced the artist. Modigliani made four portraits of him.

As usual in Modigliani's paintings of that time, the head is tilted to the sitter's right. A slight dyssymmetry adds some intimacy. Mouth and moustache are diminutive in the broad face.

Modigliani was introduced in 1915 by the Polish born painter Kisling to Zborowski who was to become his dealer in the next year. A bearded man identified as "le photographe Dilewski" has no identified biography. He was arguably an acquaintance of Modigliani through Kisling.

The symmetric face is elusive, including empty blue almond shaped eyes in the new signature style of Amedeo.

Krumauer Landschaft, subtitled Stadt und Fluss, oil, tempera and colored chalk on canvas 110 x 140 cm painted in 1916 by Egon Schiele, was sold for £ 12.7M from a lower estimate of £ 5M by Sotheby's on June 23, 2003, lot 6, after being restituted from a Nazi looting. The image is shared by Wikimedia. 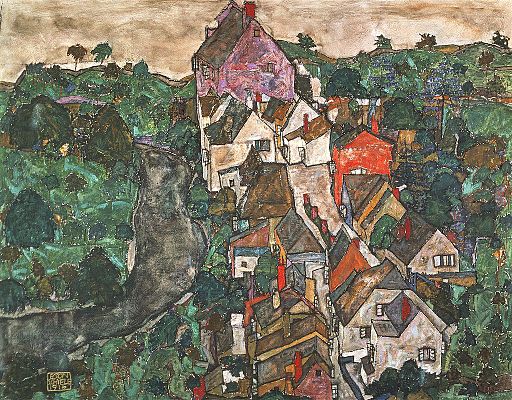 The work of Natalia Goncharova was one of the most varied of her time. She had been close of all the avant-gardes: the Blaue Reiter, Cubism, Futurism.

She early met Diaghilev, and designed for years sets and costumes for his Ballets Russes. Diaghilev was the producer of a total show combining music, dance and visual arts, as Aeschylus two thousand years before him.

Inspired by a project for the Ballets Russes, Goncharova painted a Spanish dancer, circa 1916. The long dress and mantilla are made of bright colors and decorative patterns forming a cubist swirl around the extremely simplified head.

It is tempting to draw a parallel with the beautiful futuro-cubist ballerina of Severini, dating from 1915, which was sold for £ 15M including premium at Sotheby's on June 25, 2008.

It was clearly seen. This Spanish dancer is a masterpiece of Goncharova, without reaching the artistic importance of the ballerina of Severini.

The market establishes its excellent position within the barometer of auction results: £ 6.4 million including premium.

Kandinsky was at first a painter of landscapes and epic improvisations. He is the first great theoretician of abstract art, questioning the usefulness of figuration in art and taking as an example one of his own artworks placed on the wrong side.

Yet before the 1920s and the emulation provided by the Bauhaus, he did not really become an abstract artist and willfully ignored Malevich's Suprematist developments.

Kandinsky had developed his art and his theories in Germany. Driven out by the war, he arrived in Moscow in December 1914. Like in Murnau, he is passionate about the light and colors of the city that he did not know quite well, having spent his youth in Odessa.

Moskau II is a nice example of the ambiguity of the boundaries between abstract and figurative. The main theme is undeniably the evocation of Moscow's colors.

Moskau II is not an abstract work but an evolution of an urban landscape entitled Moskau I in which perspective was highly shaken. The proportions of the buildings have been conserved between both artworks, but the detailed design of the facades and of the sun, very readable in Moskau I, disappeared in Moskau II. Depriving the viewer of his figurative marks, Moskau II offers a strange poetry.

Eileen Gray had completed in Paris her art studies. She specializes in luxury furnishings. Sensitive and autonomous with a taste for exoticism, she innovates without worrying about pre-existing fashions. Seeking quality rather than series production, she prefers designing unique works.

She opens a workshop for lacquered wood in Paris in 1910 with the specialized Japanese craftsman Seijo Sugawara. They develop together new colors. In 1913 the refinement and originality of their Japan-inspired panels are praised by fashion designer Jacques Doucet, instantly making Eileen Gray a pioneer of the Parisian Art Déco.

During the war Gray and Sugawara work in London. In the auction of the Saint-Laurent Bergé collection in February 2009, Christie's sold for € 4M including premium a highly rare lacquered enfilade cabinet made in that transition period, lot 243. At the end of the war they restart the Parisian workshop.

On November 27, 2018, a lacquered console table passed at Artcurial from a lower estimate of € 1M. It had been made before 1920 with a 124 x 39 cm top and a total length of 169 cm including the retractable side shelves. It is entirely lacquered with various colors and the lacquer of the top is inlaid with silver powder.

The only known similar table, with slightly different dimensions, was also in the Saint-Laurent Bergé collection. In its auction already referred above, it was sold for € 2.3M including premium over a lower estimate of € 1M, lot 277. It is dated before 1920 in the catalogue.
Modern Furniture
1917