Swiss painting before 1940 (page in reconstruction)

including Swiss born artists
Except otherwise stated, all results include the premium.
​See also : Hodler
Chronology : 1750-1759  1939

Born in Geneva, Jean-Étienne Liotard traveled widely. His stay in the Levant from 1738 to 1742 gave him the opportunity to wear Turkish clothes, a practice recommended at that time to the European travelers. He acquired a deserved and desired reputation of eccentricity by keeping this type of costume after returning and by growing his beard.

Liotard was also a theorist. From the beginning, he practiced pastel rather than oil to ensure a "beau fini" (good finish), meaning a smooth picture without a visible trace from a brushstroke.

With the help from his patron Lord Duncannon later 2nd Earl of Bessborough whom he had accompanied in the Levant, the career of the "Turkish painter" was a lasting success, allowing the artist to gather a large collection of Dutch paintings of the seventeenth century.

It was tempting for the artist to imitate these masters. On July 6, 2016, Sotheby's sold for £ 4.4M a genre scene in Holland, lot 36. This oil on canvas 47 x 39 cm is arguably the most successful example of Liotard's "très beau fini".

The scene of great tranquility shows a young woman in apron busy pouring coffee (not chocolate despite a title later given to this work by comparison with one of his most famous pastels). The breakfast on the table is a miniature still life and the painting on the wall is a direct reference to the lighting effects in Dutch art.

Liotard probably made this painting for his personal use as a culmination of his know how. Undated, it appears at Christie's in 1774 in a sale of his collection. It was purchased by the Earl of Bessborough in whose family it remained until the death of the 10th Earl.

A contemporary of Chardin, Liotard wants to be a modern artist. The clothes and accessories of the Dutch woman and the decorative elements are contemporary. It is taken for sure that the work was painted during a trip in Holland, probably the stay of 1755-1756 which ended with his marriage and with the loss of his fifteen years beard that was a direct consequence.

The image is shared by Sotheby's on Wikimedia : 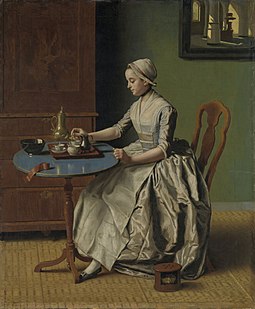 He has no equal for portraits of children and of elderly people because he never falls into the sentimentality of a Bouguereau, for example. And even if the clothes are old-fashioned, the art of Anker has a timeless appeal.

The children, always serious, learn to become young Swiss. The theme of the baby and the older sister is one of his favorites. 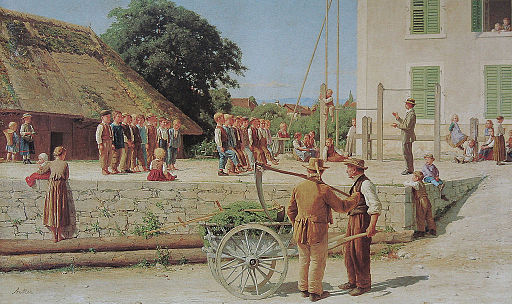 It features a young schoolgirl, busy writing on her slate board.

​The toddler sleeps in his cradle in the garden. Sister, attentive, watches quietly while knitting.

Baby is standing on the desk, trying to stay straight. The sister watches, with an enveloping movement of the arms to prevent a fall.

The image is shared by Wikimedia : The artistic evolution of Ferdinand Hodler is unique. He starts as a symbolist but his early landscapes, between realism and impressionism, are not especially significant.

Over time, however, landscape will become his most original and most emotional theme. Hodler destroys perspective to better reach infinity. The meadow in the foreground is insignificant and the vast surface of the lake repels the mountain far away.

This transformation is slow, but the mystical intent is more and more obvious. 1915 is a terrible year for Hodler. His young mistress died of cancer in January and his son battles tuberculosis in a sanatorium at Crans Montana.

Hodler no longer needs to observe the mountains. They are nothing more than an excuse to express his angst. The lake is extremely exaggerated or purely imaginary.

The mountain in the distance will never change. It is eternity, as opposed to the fragility of human works that are totally absent from this composition. Its symmetry increases its strength. The blue of the lake echoes the sky, and the ochres that dot the hill and its reflection mark the hope of a future life in this landscape at the creation of the world.

The mystical questioning of the mountains has not relieved Hodler. His life is broken. He died three years later.